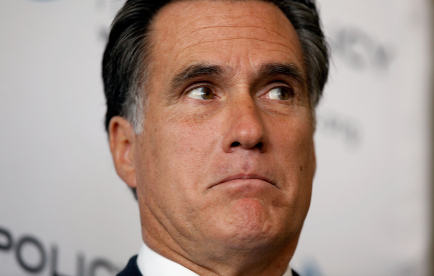 We at Sunlight Foundation are fond of writing about fundraisers and gatherings, especially the quirky or high-priced local ones that we come across on our Political Party Time website. But, once in a while, we get a chance to check out the parties in person. Or at least, experience the novelty of attending and meeting the folks who donate and coordinate these expensive affairs while we hang around outside closed doors.

So Thursday evening's fundraiser for Mitt Romney held at the Rennaissance Marriott Hotel in downtown Washington, was an irresistable target. The event was tagged at $2,500 for the general reception, $15,000 for the photo reception and then a whopping $50,000 for the private dinner. Alas, our dressed-for-success outfit was not enough to gain admission.

As with several fundraisers we've tried to hit up in the past, we got denied. Just lingering around the sign-up area just outside the ballroom where guests were picking up name tags before passing through metal detectors to the main event proved to be a no-no. We were asked to leave because the event was "closed to the press."

Happily, some of the guests were chatty. 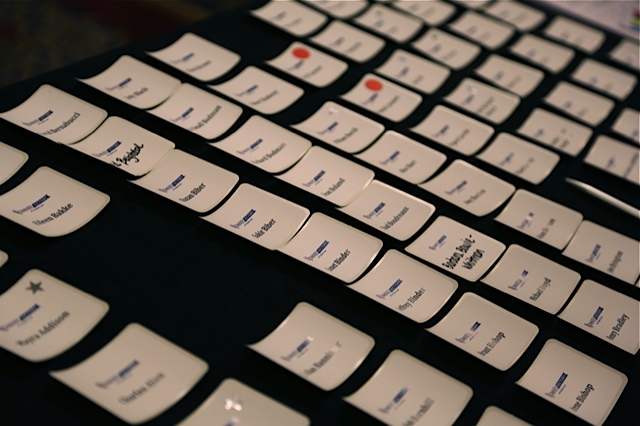 Richard Hug, a small business owner from Maryland's Eastern Shore who describes himself as one of former President George Bush's top fundraisers, informed us that the event was expected to attract around 500-600 people and raise around $4 million for Romney.  "He has a record of [reviving] ailing companies, and the U.S. is an ailing company," Hug said when asked why he's supporting this year's GOP presidential nominee. According to Sunlight's Influence Explorer, Hug has been a prolific donor to Maryland Republican candidates and groups. In the past several years, he has given around $57,000 to the Republican National Committee. Last year, he gave to Texas Gov. Rick Perry for his unsuccessful presidential campaign.

Washington, D.C.'s newly elected Republican National Committeewoman Jill Homan also came to the fundraiser. Homan, an openly gay politician endorsed by the city's Log Cabin Republicans, has been busy running in her own local campaign. But she was still able to donate a few hundred to Romney's campaign back in January. A few months after her April victory, she then contributed a larger amount — $1,000 — to the Romney Victory PAC.

Homan says she came from a Republican family, but has a sister who's a Democrat. When asked why she supports Romney, she said: "He brings the right business perspective. As a small business owner, I'm concerned about the state of the economy. Romney has a record of getting things done with a [Democratic] legislature as a governor."

Another Maryland conservative, Charles Evans, echoed the same sentiment, and lauded Romney's "integrity, character and honesty." A campaign policy director for former Maryland Gov. Bob Erlich, Evans is now a real estate developer with his own company — Evans Land LLC — and an aspiring novelist. Influence Explorer shows he has given more than $6,000 to the Romney campaign so far as well as contributions to GOP candidates for Congress.

Two other guests, Lee and Beth Gaines from Baltimore, talked about what brought them to the event as they lingered in the lobby before the reception. The couple have been married for 36 years, and consider themselves life-long Republicans. Lee is president of Gaines and Co., a contracting business that has operated in the Baltimore area since the 1950s; while Beth is identified as a "homemaker" according to FEC records.

They first got acquainted with Romney five years ago shortly before the former governor of Massachusetts became a presidential candidate at a Palm Beach, Fla. event hosted by Club for Growth, a politically conservative group the couple has been underwriting for many years.

When Romney announced his first bid for president, Beth said she immediately was on board. Lee, however, wanted to see the results of the 2008 primary campaign. The couple backed their party's eventual nominee Sen. John McCain, R-Ariz.  According to Influence Explorer, both donated $2,300 to his campaign.

Although each have donated $2,500 to Romney last April, the event Thursday evening was the Gaines' first presidential fundraiser this election season. With five weeks until Election Day, Lee said his candidate "needs help financially" and has to "step up his game" especially after a controversial video released by Mother Jones got Romney in hot water for appearing to denigrate 47 percent of the population.

The couple said their support for Romney is simply because they don't like President Obama, who they think has expanded the government too much.  "I can't take four more years of Obama," said Lee. "He's going from first base to third, without touching second. He's cutting corners."

He cited Solyndra, the solar company with close ties to the Obama administration that got federal loan guarantees before going belly-up. "If Solyndra was such a great idea, then the private sector should have invested in it," he said.

Ironically, on the same night and the same floor of the Renaissance as the Romney fundraiser, the U.S. Dept. of Energy and Albuquerque-based Sandia National Laboratories was hosting their annual Storage Program Peer Review and Update Meeting. One participant, who declined to be identified, but stayed after the meeting wrapped up for the day, said the Republicans at the other end wouldn't like "our renewable energy group."