This post was prepared in collaboration with Alexander Furnas. All graphics by Amy Cesal.

Outside money is flooding into U.S. House races, primarily from party committees, but also significantly from dark money groups and super PACs. And though Democrats need to win 25 seats to take back the House (which most forecasters deem unlikely), nobody is giving up on anything, judging from the recent cash infusions.

We are now at $218.8 million in general election House outside spending, with almost one-third of that money coming in the last 10 days, and more than half of it coming since October 1. Republicans lead in outside money $119.6 million to $96.7 million, including a two-to-one lead in dark money. Democratic super PACs, meanwhile, have outspent Republican super PACs.

What this money all adds up to, we are still waiting to see. For now, the best we can do is to give our best take on the current state of play.

Outside spending is now at $218.8 million in House races, with more than 60% of that money in October and 30% coming since October 16. Outside groups have dropped $218.8 million in outside spending in House general elections through October 25, with more than 60% of that money coming since October 1. In October, outside groups have spent $136.0 million, with  $65.6 million – about 30% of the total money – in just the last 10 days. Likely the pace will continue, as groups have continued to accelerate the pace of spending. 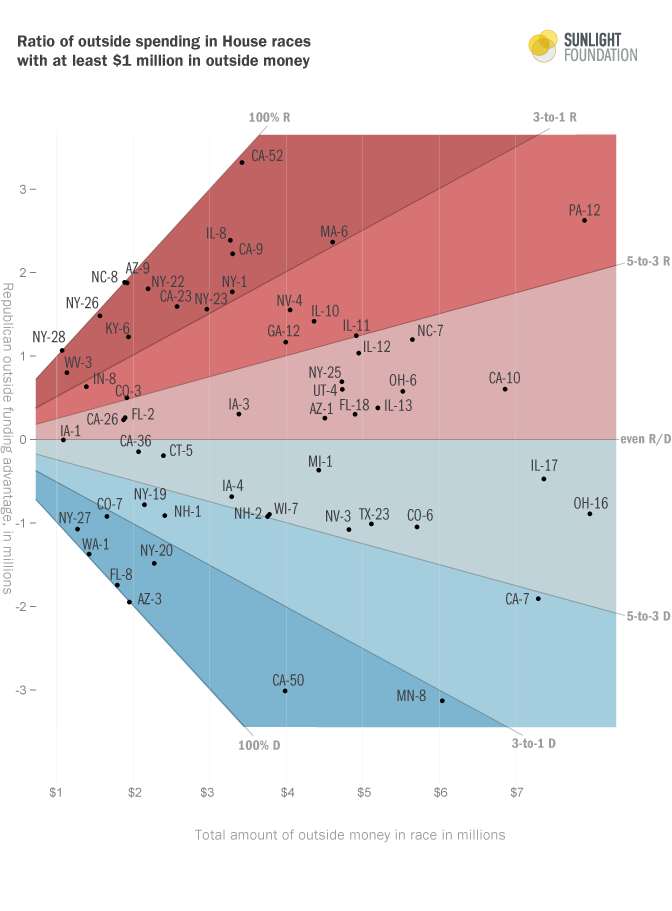 Republicans get a third of their outside money from non-super PAC, non-party groups. Of the reported Republican outside money in the general election, slightly more than one third ($41.9 million out of $119.6 million) has so far come from non-party, non-super PAC groups. That’s primarily money from the 501(c)(4) organizations Americans for Tax Reform ($9.8 million), American Action Network ($5.7 million), Crossroads GPS ($5.6 million) and the 501(c)(6) organization, the U.S. Chamber of Commerce ($7.9 million).  By contrast, Republican super PACs have contributed just $23.3 million, barely half of what these primarily 501(c) groups have spent.

Significantly, since 501(c) groups like Crossroads GPS and the Chamber of Commerce do not register with the FEC, they only have to disclose their expenditures in the 60 days leading up to the election. Likely this means they are under-reporting significant amounts of campaign spending outside of that window. Unlike super PACs and parties, these organizations also do not have to reveal their donors, and unlike parties, they can raise unlimited sums of money.

Party committees are still playing a leading role. Unlike in the Senate, where the NRSC has fallen behind outside groups like Crossroads GPS and the Chamber, in the House the National Republican Congressional Committee is by far the leading Republican outside group, dropping $55.1 million so far in 49 races. Still, even that money barely accounts for half of the outside money. Several Republican-supporting outside groups that don’t disclose their donors and only report spending within 60 days of an election are dropping substantial sums of money. That list includes, most prominently, Grover Norquist’s Americans for Tax Reform ($9.8 million in 11 races), The U.S. Chamber of Commerce ($8.2 million in 25 races), the American Action Network ($5.7 million in 29 races), and Karl Rove’s Crossroads GPS ($5.6 million in 11 races).

Democrats also get the most outside money from the Democratic Congressional Campaign Committee ($48 million in 86 races), about two-and-a-half times the $18.2 million that the major Democratic super PAC, House Majority PAC, has spent. The top Democratic dark money group is the SEIU Committee on Political Education, which has spent $4.7 million in 35 races. By comparison, SEIU’s companion super PAC has only spent $2.9 million in 21 races. Also, it’s worth noting that the Democratic Congressional Campaign Committee borrowed $17 million to stay competitive in a number of House races.