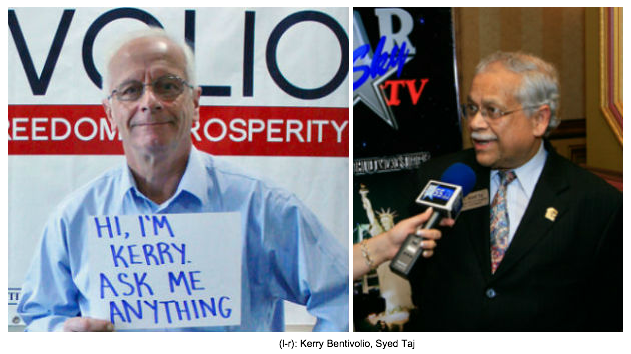 In the final weeks leading up to Election Day, an outside spending group with ties to two infamous negative campaigns against Democrats has launched efforts to rescue two Republican Party outcasts.

The two men are cast as the black sheep of the GOP, refusing to bow out of their races despite efforts by party higher-ups to have them removed from the ballots.

Akin received a lot of heat from both sides of the aisle last August after expressing his views about "legitimate rape" and female biology in a televised interview. Both GOP presidential nominee Mitt Romney and Senate Minority Leader Mitch McConnell, R-Ky., called for Akin to quit the race. Since then, Akin has also accused his opponent incumbent McCaskill of not acting "ladylike" during the first senatorial debate. Even so, some GOP conservatives, including former presidential candidate Rick Santorum, came to his rescue. And Freedom's Defense Fund has poured $242,423 into his race. Akin is also the second candidate to receive indirect — which also means unlimited — funding from the group.

The first was Bentivolio, the GOP nominee in a Michigan House race that the non-partisan Cook Political Report has described as this year's "weirdest." Bentivolio became the nominee by default after McCotter quit, leaving the little-known reindeer farmer the only candidate on the ballot shortly before the primary election. Local GOP officials launched a write-in campaign on behalf of former state senator Nancy Cassis, but she failed to clinch the nomination.

She claims that super PAC spending was responsible for her loss. Along with Freedom's Defense Fund, Liberty for All, the libertarian-leaning super PAC led by two recent college graduates who supported the presidential candidacy of Rep. Ron Paul, R-Texas, also participated in the Michigan race, spending more than $500,000 opposing Cassis.

Since July, Freedom's Defense Fund has backed Bentivolio to the tune of $135,271. This includes the political ad that launched last Friday accusing Taj, of being too "extreme" and having "plans to advance Muslim power in America." The physician is an Indian immigrant of Muslim faith.

The Democrat's campaign immediately responded with its own ad against Bentivolio, highlighting the war veteran-turned reindeer farmer and Santa Claus impersonator's starring role in a film accusing former President George Bush of organizing the September 11 attacks. The ad also highlights a report that he verbally abused his students while he was a high school teacher.

UPDATE Nov. 5: After this post was published, Michael Centanni, chairman of Freedom's Defense Fund and COO of Base Connect, contacted Sunlight to say that the group originally planned to run "a positive ad in support of Kerry Bentivolio." When he saw Syed Taj's negative ad against Bentivolio, Centanni said in an email, he decided to respond in kind.

Bentivolio is favored to win: McCotter held Michigan's 11th Congressional District for 10 years before his resignation and the recent carving of congressional districts in the Wolverine State guaranteed a safe seat for the incumbent.

But the veteran Republican's re-election bid also floundered when election officials found that his staff duplicated signatures in not just this year's nominating petition, but in past elections' documents. The congressman, a guitarist in a country band called The Second Amendments, left Capitol Hill last July.

In this election cycle, Freedom's Defense Fund has made smaller donations to a number of conservative candidates' campaign committees, Sunlight's Influence Explorer shows. But the group appears to have made a special priority of Akin and Bentivolio, opting to make independent expenditures in support of their campaigns, which allows Freedom's Defense Fund to circumvent federal campaign limits. The organization didn't respond to Sunlight's inquiries as to why these candidates were separately funded.

Freedom's Defense Fund has a history of supporting anti-establishment candidates. Treasurer Scott B. MacKenzie also managed the 9-9-9 Fund, one of the super PACs that backed business executive Herman Cain during his second brief stint as a presidential candidate. Salon.com also reported two years ago that MacKenzie was associated with Base Connect, a direct mail firm has been accused of shady self-dealing in its past campaign practices.

The committee also lists Jerome Corsi as a paid consultant since 2007, according to the Center for Responsive Politics. Corsi helped helm the movement that accused Obama of not being born in United States; Corsi authored Where's the Birth Certificate? The Case That Barack Obama Is Not Eligible to be President. In 2004, Corsi wrote Unfit for Command: Swiftboat Veterans Speak Out Against John Kerry.