As the wheeling and dealing around the “fiscal cliff” continues to envelop Washington, thousands of lobbyists representing more than a billion dollars are watching, and getting ready to complicate any potential deal.

Another way of showing the reach and diversity of lobbying on these issues is to note that almost one in three organizations that lobbied in 2012 (31.8%) reported lobbying on budget issues, far more than any other issue. Roughly one in six (15.8%) reported lobbying on tax issues, and one in eight (12.5%) have lobbied on defense issues.  The chart below shows the share of clients lobbying on these issues over time. As we can see, these patterns have been consistent for a while, though in the last few years, taxes have attracted a growing number of clients, while both budget and defense issues have been declining. 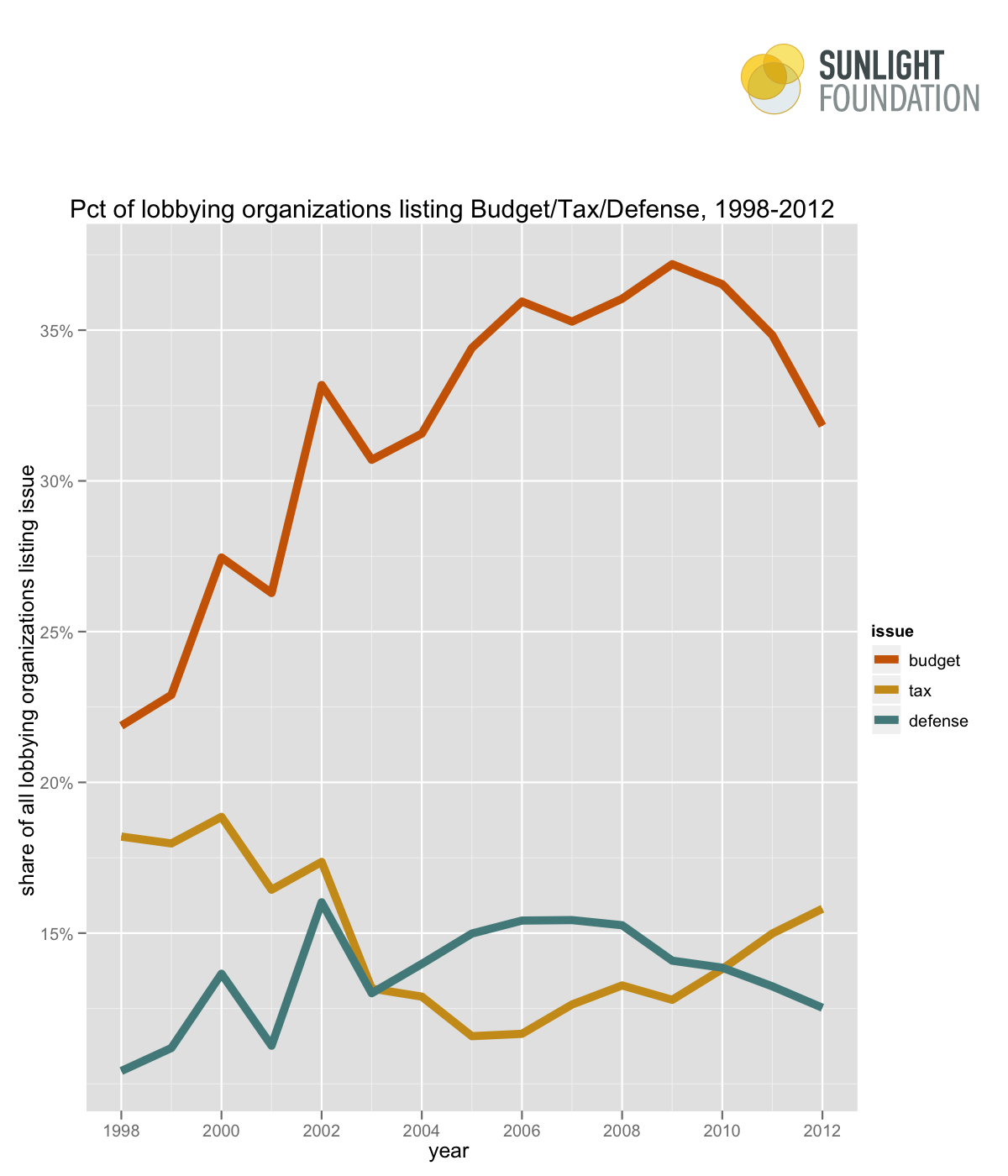 The figure below visualizes the most active industries on budget and tax issues combined. This directs us to a few sectors with major interests in both tax and budget issues: manufacturing, electric utilities, pharmaceuticals, business associations (a category dominated by the Chamber of Commerce), and computers/internet.

Looking more closely just at taxes, the 20 sectors that have spent most on tax lobbying are listed below.

The specific tax issues that these organizations in these sectors have are varied, and beyond the scope of this post. An extensive reading of the issues listed in lobbying reports would impress on the reader the amazing diversity of issues that organizations (largely corporations) have with the tax code. They can all be accessed through Influence Explorer.

The big picture point is that there are 22 sectors that have spent at least $10 million lobbying on tax issues in the 112th Congress (through the second quarter of this year). And they are poised and ready to fight any changes to loopholes or benefits they currently enjoy.

Likewise on budget issues. One again should be impressed with the range of organizations and interests with something at stake.

Again, the lobbying reports themselves reveal a great diversity when looked at in detail (you can find them all on Influence Explorer). But as a simple summary, these totals call attention to the sectors that have already weighed in most heavily on federal budget matters in the 112th Congress, and thus which sectors are likely working most actively to make sure that their piece of the federal budget doesn’t get cut.

At this point, we have no idea what the final sausage of budget cuts and tax loophole closures will look like. But whatever winds up on the chopping block, there will be plenty of yelling and screaming from somewhere.

The totals presented here tip us off to where some of the loudest screaming might come from: On tax loopholes, we can look most closely to manufacturing, pharmaceuticals, insurance, securities, and oil and gas interests. On budget cuts, we can look most closely at manufacturing, education, local government, pharmaceuticals, and hospitals. These have been the most active sectors so far this Congress. The question is how much these impressive spending totals will translate into these sectors being spared.

Additionally, these numbers also serve as a reminder that whatever deal is reached, there are thousands of organizations that have hired lobbyists to work on tax and budget issues. And you can bet that even if they lose, their lobbyists will be right there to sell them on how they can win back those loopholes and budget lines next year. After all, the history of lobbying is thatthe losers just wait for public attention to move elsewhere, and when it does, they get back much of what they’ve lost  (as political scientist Eric Patashnik has explained in his excellent book Reforms at Risk). The Tax Reform Act of 1986 serves as a chilling reminder. Twenty years after the remarkable tax-code clean up, a presidential commission counted 15,000 changes to the tax code. As the commission’s report noted: “Each one of these changes had a sponsor, and each had a rationale to defend it. Each one was passed by Congress and signed into law.” This also speaks to what Jonathan Rauch has labeled “demosclerosis” – that ever-thickening density of interest groups with the motive and will to maintain the status quo, thus constraining the flexibility of government.

Point is, armies of lobbyists are massed to do battle on tax and budget issues. At the very least, this analysis provides a guide to who they are fighting for. Wherever tax and budget deal-makers turn, they are going to be going after somebody’s loophole or somebody’s budget item. And chances are, that somebody will have a lobbyist to make that difficult.

Thanks to Zander Furnas and Amy Cesal for their help in preparing this post.

This analysis was made possible by data and categories provided by the Center for Responsive Politics. Issue spending totals were calculated based on the share of lobbying report issue descriptions allocated to each issue listed in lobbying reports.