As “fiscal cliff” negotiations continue to slow to a standstill, Americans might be feeling frustrated about the inability of their representatives to reach a compromise. Wasn’t the election supposed to settle the argument?

There are many reasons to explain the intransigence. Last week, we documented the ubiquitous lobbying on tax and budget issues that will almost certainly complicate any attempt to reach a deal.

But there’s another factor to keep in mind: The majority of members of Congress have relatively homogenous constituencies. That means they’re probably hearing overwhelmingly from only one side of the argument back home, and facing limited pressure to find a compromise.

Even in the Senate, where races tend to be closer, 60 percent of races were won with 55 percent or more of the vote.

The vote share distributions are pictured below, broken down by party. 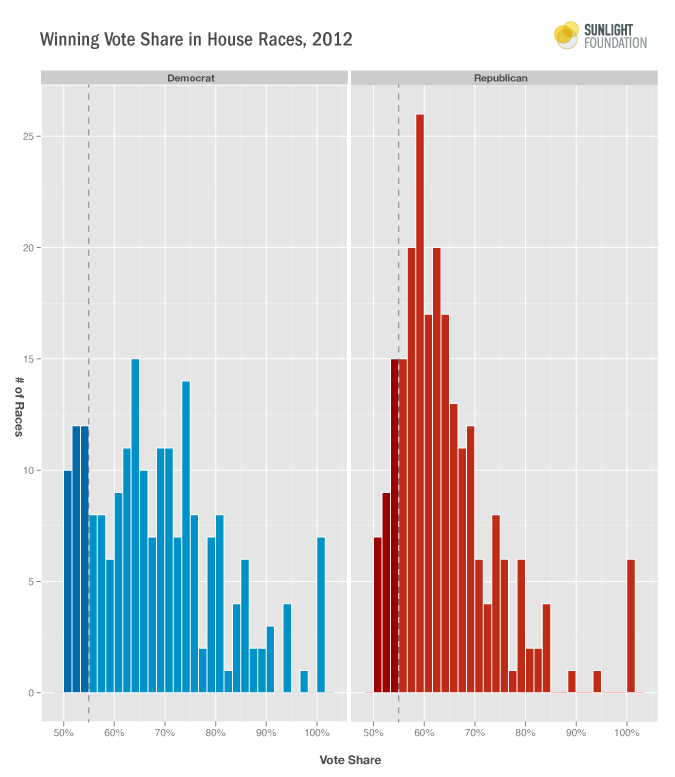 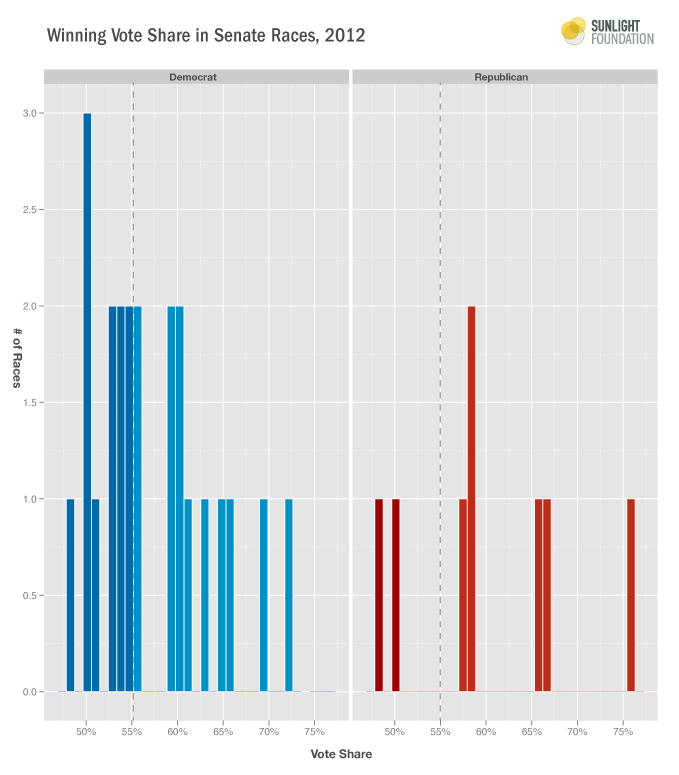 For many members, particularly those on the right, the greatest threat that they face is a primary challenge from that  wing of the party. There is some evidence from political science that recent redistricting activity has contributed to polarization, and some evidence that increasingly extreme districts have contributed to more extreme lawmakers. Also worth remembering: One of the few Republican-leaning outside spending groups that had a positive return on investment this year was Americans For Tax Reform, which is headed by Grover Norquist, a vocal opponent of any budgetary grand compromise that would involve tax hikes.

Thousands of lobbyists will be asking members to make sure to protect particular tax deductions and budget line items that benefit particular constituencies with lobbies to represent them. Party leaders will be pressing hard to get in line with whatever party leaders work out.

Add to that the fact that despite what felt like a contested national election last month, most members didn’t need to break a sweat to get re-elected. Instead, they represent relatively homogeneous constituencies, whose ideological anchors do not tend to make for good compromise politics.

Thanks to Alexander Furnas, Amy Cesal, and Alex Engler for their help in preparing this post.