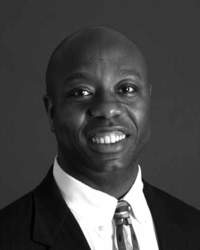 Gov. Nikki Haley has narrowed her list of potential successors for outgoing Sen. Jim DeMint to five, according to reports by CNN and The Washington Post, among others. Of those, freshman Rep. Tim Scott, the first African American to be elected to Congress in South Carolina since the late 19th Century, appears to be the frontrunner. Other candidates include South Carolina's former first lady, Jenny Sanford, widely admired for her stoicism in the face of the mortifyingly public philandering of Mark Sanford, the state's former governor and now, her former husband.

Scott, seen at right, is a Tea Party favorite with a past as a successful businessman, and those two aspects of his career are also the most represented among his top campaign donors. His biggest all-time donor: The political action committee of the fiscally conservative Club for Growth, which has given him more than double as much as any other entity. The group raised $65,550 for him for his 2010 race, when he was first elected to Congress, according to the Center for Responsive Politics. That year, he beat former Sen. Strom Thurmond's son in the GOP primary. Scott's appointment would be history-making and a sweet bit of irony given South Carolina's long representation by Thurmond, a Democrat turned Republican who once ran for president as head of the segregationist Dixiecrat Party.

The Club for Growth has given him a very favorable 92 percent rating on his House voting record. The group also paid for his flight and lodging to participate in a congressional panel on conservative policies at the group's annual winter conference on March 8 and 9 earlier this year, according to his spokesman Sean Smith. The trip was listed on his 2011 House personal financial disclosure form.

Scott owned an AllState insurance branch before being elected to Congress, which he sold for between $500,000 and $1 million in April 2011, his personal disclosure form shows. Despite exiting the insurance business, the business keeps being good to him — the industry is his second biggest donor behind real estate, according to CRP. Health professionals are third on the list.

In April 2011 Scott sold the insurance branch–Tim Scott & Associates, LLC–according to his personal financial disclosure. He earned a $5,500 salary from the company and between $5,001 and $15,000 in dividends during the time before the sale, according to Smith. According to House rules, members of Congress can still earn a salary from outside employment as long as it does not exceed $26,955 in 2012.

The website of Tim Scott & Associates says that the company's services are coaching, consulting and speaking. It glowingly sells Scott's abilities, calling him a "bred" leader who has been guided by God. "God has shown him how to reach his highest potential; spiritually, emotionally, physically, and financially. And now the Lord has ignited a desire in him to share what he knows with you," the website says. Scott is an evangelical Christian.

The website says Scott built his insurance agency from scratch to a 2,000-plus client base in less than four years, creating $2 million in revenue and and winning new agency of the year award. It also notes that he chaired the Charleston County Economic Development Committee, during a time when the committee created over 6,000 jobs.

First elected in 1995 as a member of the Charleston County Council, Scott later served in the state legislature before winning his House seat in 2010. Since launching that campaign, he has raised a total of $2.9 million in campaign contributions. Sunlight's Political Party Time lists at least 12 fundraisers for Scott. And he's also hit the party circuit on behalf of others: Earlier this month Scott attended a fundraiser on exclusive Johns Island, S.C. for Rep. Joe Wilson, the Palmetto State Republican who infamously shouted “you lie,” during an Obama address to a joint session of Congress. Joining Scott at the fundraiser: banker Mallory Factor and his wife, Elizabeth, who co-authored a book blasting government unions.

Conspicuously absent from the list of finalists for the Senate post: Rep. Mick Mulvaney, yet another GOP freshman who initially had been considered Scott's top competitor. Mulvaney received yet a higher rating from the Club for Growth — 99 percent. Mulvaney raised $1.6 million to get by longtime Democratic congressman John Spratt in 2010. He was helped by a whopping $2.5 million spent by outside groups on advertising and mailers, including $421,000 from the Club for Growth and hundreds of thousands of dollars more from the GOP groups Faith & Freedom Coalition and American Future Fund, according to CRP. The Club for Growth PAC is also Mulvaney's biggest career donor — at $85,500, followed by employees of South Carolina-based Tucker Lumber and Freedom PAC (the leadership PAC of Speaker John Boehner, R-Ohio).

Update, 8:55 p.m.: According to Tim Scott's spokesman, Scott has divested his role in all companies he was involved with. He sold Tim Scott & Associates in April 2011. The post has been updated to reflect this information.

Correction 11:15 a.m., 12/12/2012: This post has been corrected to reflect that Scott is not the first black Republican to be elected to Congress from South Carolina. Rather, he's the first since the 1890s.