The tragedy at Sandy Hook Elementary has brought gun policy back to the forefront of our national conversation. As a nonpartisan, nonprofit Sunlight takes no stance on the issue, but we have put together a collection of resources looking at the legislation, policy and influence around gun rights and gun control, plus the groups and lawmakers involved.

Lee notes that when it comes to the debate on gun policy, Congress is pretty much only hearing from one side. The NRA spends 66 times what the Brady Campaign spends on lobbying, and 4,143 times what the Brady Campaign spends on campaign contributions. Since 2011, the NRA spent at least $24.28 million: $16.83 million through its political action committee, plus $7.45 million through its affiliated Institute for Legislative Action.

According to Influence Explorer records, the Brady Campaign spent $5,800 this election cycle and reported $60,000 in lobbying costs.

UPDATE Dec. 18: That $16 million spent by the NRA’s super PAC, which largely went to opposing Democrats running for Congress, produced a 0.83% return on investment, according to new re-calculations published today.

The Sunlight Reporting Group calculated the NRA’s giving history to Connecticut politicians, about $395,000 to date. Since 2010, the NRA reported spending $8,000 on lobbying in the state, while the National Sports Shooting Foundation (see below), another gun rights group, invested more than $20,000 lobbying Connecticut lawmakers on on firearms related issues.

The NRA is also a frequent fundraiser host according to Party Time, with more than 20 invites for events at their D.C. headquarters for both Democrats and Republicans. See here for more detail.

In addition to closed door fundraisers, the gun lobby also wields its influence on public regulatory dockets of federal agencies, including some 127 submissions to officials at the Fish and Wildlife Service. Gun control groups, like the Brady Campaign, comment far less frequently.

On Capitol Words, you can compare congressional speeches over the past 15 years. Looking at “second amendment” vs. “gun control,” the former is more likely to said by a Republican lawmaker (at 56%). While, as expected, “gun control” is said by a Democrat 59% of the time. This comparison is since 1996 and covers both the House and Senate. 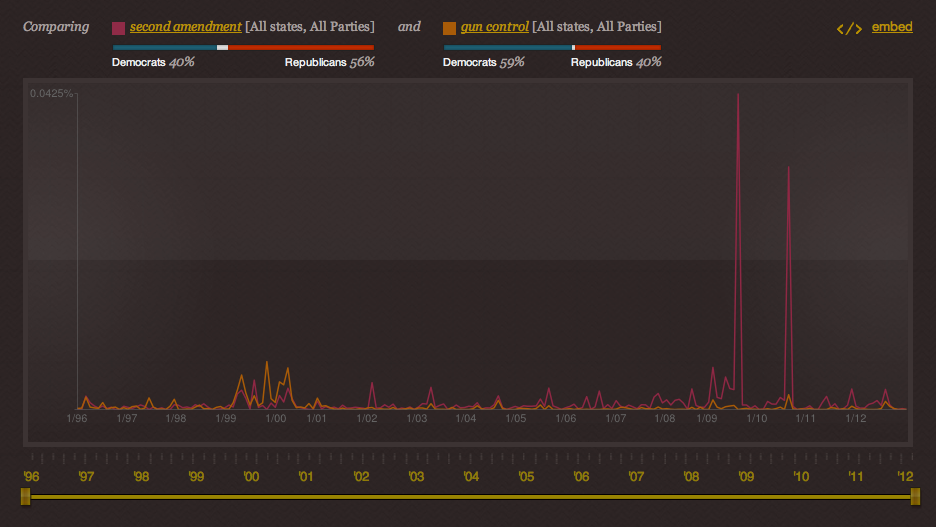 Sunlight’s Scout service allows you to track any issue or bill in Congress or your state capitol. You can search “second amendment,” “gun control” or “assault weapons” to find relevant legislation and speeches.

One bill is the National Defense Authorization Act for FY 2013. In section 1093, it “expresses the sense of Congress that active-duty military personnel stationed or residing in the District of Columbia should be permitted to fully exercise their rights under the Second Amendment to the Constitution and be exempt from the District’s restrictions on the possession of firearms.” The bill passed the Senate, is in pending final passage in House, and the the final step will be President Obama’s signature.

On the topic of background checks and firearms purchases, the Fix Gun Checks Act of 2011 is another one to review. And the Child Safety and Gun Access Prevention Act of 2011 was introduced in January 2011 to amend the Brady Handgun Violence Prevention Act.

Our Open States project (in beta) allows you to search legislation in all 50 states, plus D.C. and Puerto Rico. In response to what happened in Newtown, we opened up Connecticut’s bill history, where you can review more than two dozen bills related to “firearm.” The legislation dates back to 2011 and cover a variety of gun-related topics from conceal and carry, firearm registration and assault weapon definitions.

In November, the Congressional Research Service issued a report on gun legislation. The report “provides basic firearms-related statistics, an overview of federal firearms law, and a summary of legislative action in the 111th and 112th Congresses,” and cites congressional responses following recent mass shootings in Aurora, CO, Milwaukee, WI, and Tucson, AZ. Read the report made available by the Federation of American Scientists (pdf) or at Open CRS.

Supreme Court and the 2nd Amendment

Visit the Constitution Annotated, a website run by the Legal Information Institute at Cornell University Law School, for a look at how the U.S. Supreme Court interpreted the 2nd Amendment throughout judicial history. More recently, the Supreme Court heard District of Columbia v. Heller in 2008, which upheld an individual’s right to possess firearms and allowed D.C. residents to legally own and register a gun, albeit with restrictions. Read the ruling here, as well as oral arguments around the subsequent McDonald v. Chicago case in 2010. Feel free to add your own resources in the comments.