In the wake of the tragic shooting in Newtown, one of the emerging debates is whether there will even be a debate. Past mass shootings have come and gone without any action. Many argue that the reason for this inaction is simple:  politicians have been afraid to take on the National Rifle Association, the large and influential pro-gun lobby that spent at least $18.6 million this past election cycle – $11.1 million through its Political Victory Fund, plus $7.5 million through its affiliated Institute for Legislative Action.

As CBS News chief Washington correspondent Bob Schieffer put it,  “Congress is literally afraid to take on the National Rifle Association because they know that if they make any kind of statement [that] even suggests some sort of limits on gun control, the NRA is going to pour, literally, hundreds of thousands of dollars in a campaign to defeat them.”

Here are the data: The NRA has spent 73 times what the leading pro-gun control advocacy organization, the Brady Campaign to Prevent Gun Violence, has spent on lobbying in the 112th Congress ($4.4 million to $60,000, through the second quarter of 2012), and 3,199 times what the Brady Campaign spent on the 2012 election ($18.6 million to $5,816). (One caveat on the data is that the NRA itself does a very poor job of accurately reporting its spending, and we must rely on its self-reports.) 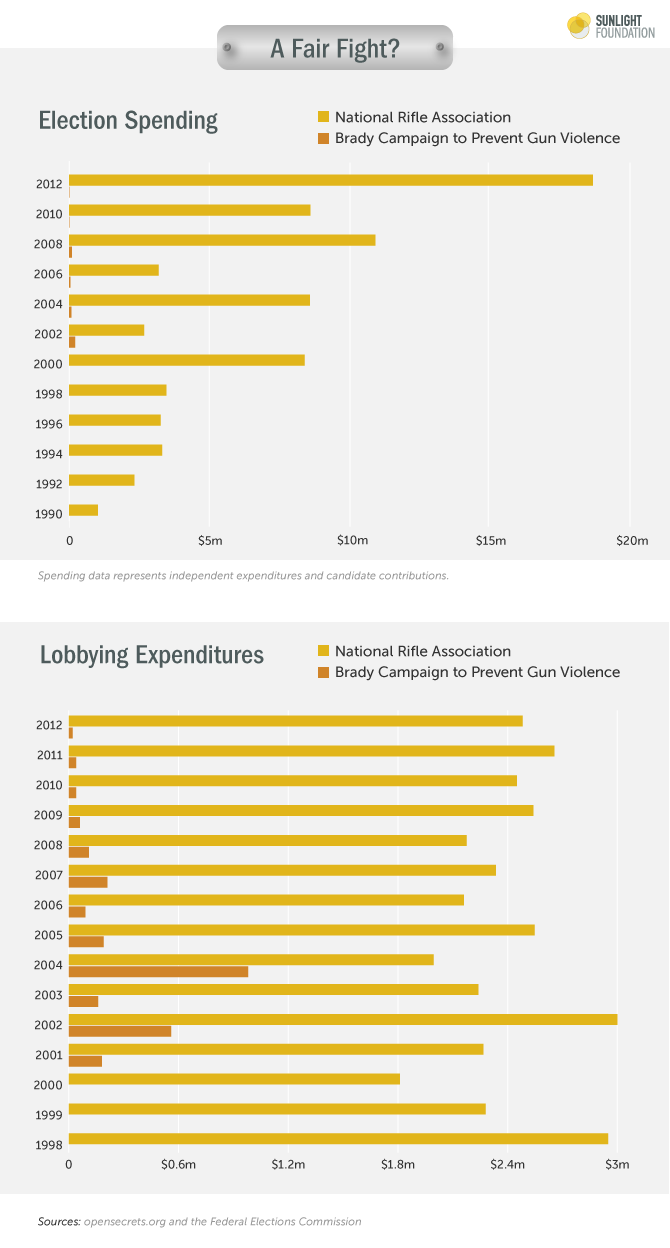 What these numbers don’t capture is that the NRA boasts a grassroots  list of millions of voters and the resources to mobilize these voters at even the slightest threat of gun control laws. Gun control advocates have nothing that comes close. In 2012, the NRA spent at least $682,595 on communication costs, that is, political messages to its own members.

When it comes to the debate on gun policy, Congress is only hearing from one side.

It is also important to note that the NRA is not the sole pro-gun group. The Gun Owners of America, which takes an even more fundamentalist position on guns (in the wake of shooting, their position is that gun control advocates have “blood on their hands” for banning guns from schools), has spent $26.9 million on lobbying since 1998, and spent $1.4 million on elections since 1990. The National Shooting Sports Foundation, headquartered in the same Newtown, Connecticut where the shooting took place, has spent $1.7 million lobbying since 1998, and spent $770,197 on elections since 1990.

By contrast, the only other explicitly pro-gun control group we can find, Mayors Against Illegal Guns, has spent $730,000 on lobbying since 1998, and nothing on elections. We should also note that these data do not include Handgun Control Inc., which merged with the Center to Prevent Handgun Violence in 2001. Between 1998 and 2001, Handgun Control did spend $1.1 million on lobbying going back to 1998 and $1.4 million on elections going back to 1998.

If incentives explain political behavior, the data show where the incentives lie. The imbalance of resources signals that all the political rewards are concentrated one side of the issue: the side of inaction, the side of fewer restrictions. Until this changes, gun control laws are going to be very, very difficult to pass.

Update (12/18/12): The 2012 NRA spending number we published on 12/17/12 was off because of a bug in the program we used, leading to double counting of some expenditures that had been itemized in the National Rifle Association of America Political Victory Fund’s amended post election report. We did not realize the error because totals reported by the Federal Election Commission reflected the same error. We have corrected the error.