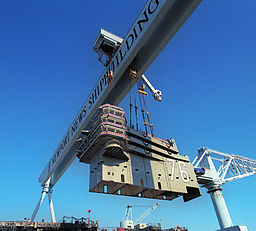 When President Barack Obama travels Tuesday to the historic Newport News Shipbuilding facility to make a point about the potential damage from the looming sequestration axe, he'll be making a political point in more ways than one.

In a sense, he's reminding Republican budget hawks that they could be biting a hand that feeds them. The employees and political action committee of Newport News Shipbuilding have given more generously to Republican politicians than to Democrats over the years, the company's profile on Sunlight's Influence Explorer shows.

A search for contributions to the president's campaigns by Newport News Shipbuilding connections turned up precisely nada. (Some employees did donate to Obama's 2012 Republican rival, Mitt Romney).

Newport Shipbuilding, which dates to the late 1800s, has built many of the Navy's battleships, including the U.S.S. Ronald Reagan, shown under construction, above. While the company had a comparatively measly $1.5 billion in contracts from the U.S. government in 2012, in recent years, the total has been as high as $17 billion, according to the government's own calculations.

As Sunlight's Lee Drutman has elsewhere pointed out, the millions defense contractors spend lobbying Capitol Hill works out to chump change compared to the price tags of their government contracts. But all are threatened with a potential 9.4 percent cut if Congress and the White House fail to strike a deal to avoid the sequester.

Not so coincidentally, Huntington Ingalls CEO Mike Peters has scheduled a call to discuss his company's finances Wednesday, the day after Obama's visit to the Newport News Shipyard.