Brad Lichtenstein is an award-winning documentary filmmaker and president of 371 Productions, a Milwaukee-based company that makes media and technology projects for the common good. BizVizz is a corporate accountability mobile app inspired by his latest film, As Goes Janesville, which premiered on the PBS series, Independent Lens. He can be reached at @bradleylbar

In 1973, I got into a fight with an older, big, mean 8 year old because he (or more likely his parents) loved Nixon. In my squeaky kid-rage voice I screamed that Nixon was a criminal who lied to us. He pushed me down then promptly kicked me out of our neighborhood car city. I fought back by sneaking out that night to sabotage his area. I remember this story vividly some 30 years later because it reminds me of how intense the feeling of rage can be and how useless it is to vent it in destructive ways. 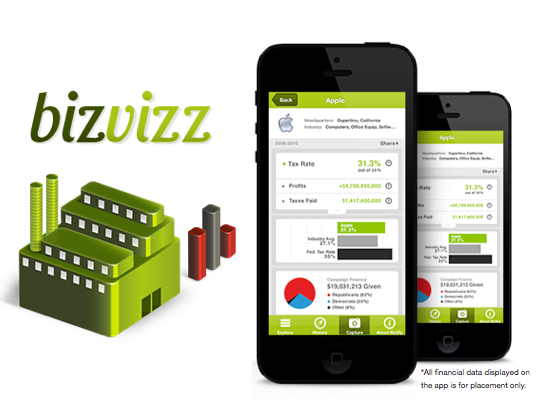 BizVizz, our corporate accountability app, was born by a similar rage. Toward the end of As Goes Janesville, my PBS/Independent Lens documentary about a GM town trying to recover from their century-old plant’s shutdown, the city council votes to approve a $9 million incentive package for Shine Medical Technologies. That’s 20% of the town’s budget for a medical isotope startup that has pitted cities against each other to leverage tax breaks in exchange for the promise of jobs. The risk wasn’t what made me seethe so much as the way the city council and town leaders acted in the dark, subverting transparency by never disclosing the results of a third party audit of the company nor holding a public hearing despite the fact that taxpayers were footing the bill. Score another defeat for democracy.

This time I didn’t act on my rage in a destructive way. Inspired by what I witnessed, and knowing this kind of thing happens every day across America, I resolved to give the public more access to corporate and government dealings. Working with a team that included Faculty Creative, a digital design firm in Philly, and the Independent Television Service (ITVS), we came up with BizVizz. It’s an iPhone app that provides people with data we call the “trifecta of corporate accountability”: taxes, government subsidies and campaign contributions. It’s the 21st century. I say, “don’t get mad, share data instead!”

I got an email from Target the other day asking how we got access to the information we present about them in BizVizz. I don’t understand how a Target employee in investor relations doesn’t immediately understand that the data in BizVizz is public. It comes from Federal Election Commission filings, IRS filings and other government records. Thankfully, we still have some disclosure laws on the books that compel transparency. The problem is that ordinary people are too busy to find the data, much less share it. That’s why we made BizVizz, to put a little power back into the hands of ordinary citizens, the folks who are paying for corporations’ tax breaks and subsidies and feeling helpless in the face of a campaign finance system that has corrupted our democracy.

BizVizz has struck a nerve. In just 3 weeks 30,000 people have downloaded our app. I think this has happened because it’s not just information that people want. It’s fun! In fact, the reason we worked with Faculty Creative is because their approach to making apps is to treat them like toys. Instead of overwhelming our users with too much data, we focused on turning the app into a toy. That’s how we came up with the idea of snapping a picture of a logo or product to get information about companies. It turns your everyday commute, your visit to the drugstore, your grocery shop, anything you can imagine into a fun journey to discover what the companies all around you are up to. We are a tease, in a way. If users want more, we send them to our amazing dedicated partners like the Sunlight Foundation, Good Jobs First and Citizens for Tax Justice who can provide a deeper dive into issues of corporate and government accountability. Unlike corporations, we don’t have a giant marketing budget. In fact, we have none at all. That’s why we joined forces with partners like the AFL-CIO, Tax Justice-USA and US PIRG to help spread the word about BizVizz.

“As Goes Janesville” Official Theatrical Trailer from 371 Productions on Vimeo.

Soon we will begin sending messages to our users and offer them opportunities to learn more about accountability issues or get involved by supporting legislation, a partner organization’s campaign, or a petition drive. I’m curious to see if our users will take that next step.

It’s thrilling to see how a movie about a small Wisconsin town has lead to a way to strengthen our democracy. It’s why I got into filmmaking — to inspire people to contribute to the common good. If the technology powering BizVizz had been around in 1973 maybe I could have avoided a useless fight and instead told that mean 8 year-old boy that his hero, Nixon, was a criminal in more ways than Watergate. Nixon was also a tax dodger — something I learned because a professor of accounting published a history of Nixon’s tax woes on the Internet. Data is power!

With tax day around the corner and yet another fiscal cliff crisis upon us, I know you’ll be feeling a little rage. I give you a gift, a mobile app, a toy called BizVizz that can channel your rage into productive activity. Take some pictures of logos. Share what you learn. Together, we can take back our democracy one tweet at a time.