When Facebook’s Mark Zuckerberg formally launched his new immigration advocacy effort today with an op-ed in the Washington Post, it underscored the role being taken in the immigration debate by the tech community, which has been emerging as a powerful lobbying force in Washington.

According to sources quoted in a  Politico story,  the new group,  FWD.us, that Zuckerberg founded with other Silicon Valley luminaries,  will “place its initial focus on the passage of comprehensive immigration reform.” While the group emphasized the need for reform that is “comprehensive” — Capitol Hill-speak for legislation that includes border security measures and a path to citizenship for millions of people now living in the country illegally, the Politico piece goes on to note that the tech industry has a very specific goal, namely, “to increase the number of H1-B temporary visas for high-skilled foreign workers as well as lessen the wait times for green cards for their workers.” Last year, Facebook filed 384 requests of some 65,000 visas available for high skilled employees, according to the website myVisajobs.com.

The backers of Zuckerberg’s new nonprofit match closely with one of the clusters we identified in our look at the structure of immigration lobbying, late last month. Other co-founders of the group are: Reid Hoffman, the co-founder of LinkedIn, and John Doerr, whose powerhouse venture capital firm, Kleiner, Perkins, helped incubate Google and Amazon.com. Other major supporters pictured on the website or mentioned in Zuckerberg’s op-ed include: Yahoo CEO Marissa Mayer, and Eric Schmidt, Google’s top executive, as well as top officials from blue chip tech firms such as Airbnb, Facebook, Instagram, Netflix, Reed Hastings, Groupon, PayPal, Y Combinator and Zynga.

MORE: Give me your poor, your tired your . . . lobbyists?

Several industries that have lobbied extensively on immigration in the past are well represented among that group, in particular computer software, data processing and computer services and online computer services. Below is a closeup of the larger immigration lobbying network we produced, with these industries and some of the bills on which they lobbied most since 2007 highlighted. Looking more closely at this cluster can provide us some useful clues into the provisions that FWD.us is likely to advocate for as it enters the influence game. 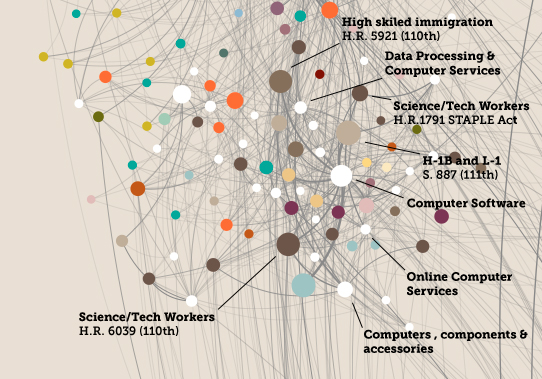 The key bills in this network tell us a lot about the kinds of provisions that the tech industry cares about when it comes to immigration reform. The table below shows the most lobbied on bills in the 109th – 112th Congresses by the sectors most relevant to the parties behind FWD.us (computer software, online computer services, and data processing and computer services).

It is clear that of the Sunlight-identified immigration sub-issues, the tech industry has been most active in three areas: H1-B and L1 visa reform,  high skilled immigration reform, and science/tech worker specific provisions. Lets look at these three areas in turn.

We don’t know for sure exactly what FWD.us will push for in this current round of immigration reform, but we can make some good guesses. If the associations of its major backers, and the history of the technology sector are any indication, look for FWD.us to work hard to ensure that some very specific asks are included in any comprehensive immigration bill.