In the 2012 election 28 percent of all disclosed political contributions came from just 31,385 people. In a nation of 313.85 million, these donors represent the 1% of the 1%, an elite class that increasingly serves as the gatekeepers of public office in the United States.

William J. Doré, Sr., who rose from humble beginnings to make hundreds of millions in the energy industry, ended up as the biggest donor to the super PAC that kept Rick Santorum’s presidential bid afloat in 2012. Unlike Foster Friess, another well-heeled donor to the Red, White and Blue Fund whose comments occasionally led to embarrassing headlines, Doré kept a low profile. He gave no interviews to the press about his $2.25 million in donations.

His support of a former Pennsylvania senator who fed rhetorical red meat to social conservatives throughout his 2012 campaign raised some eyebrows. Unlike most of the bigger super PAC donors, Doré has given to both Republicans and Democrats, hedging his bets at the national and state level. 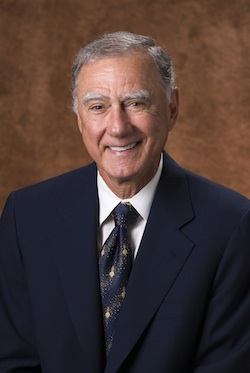 That also makes him an atypical member of the elite donor class – dubbed the 1 percent of the 1 percent – four fifths of whom gave all of their contributions to one party in 2012. Apart from the Santorum donation, Doré had given about half of his money to Republican candidates and parties and half to Democrats at the state and federal level, according to a review of Influence Explorer records.

“I could care less whether he’s a Democrat or Republican,” he said in describing candidates he likes to give to.

Apart from that, Doré, who goes by Bill, is intriguing for his behind-the-scenes style and avoidance of the media. He has not granted an interview to the media about the Santorum donation until now, he said, because he worried about people writing anything bad about him or his family. He also said he will financially support another Santorum run at the presidency in 2016, which he believes will happen.

Doré, who comes from Cajun farming stock, says he gives based on a candidate’s contributions to Louisiana or the country, “what they stand for” and “their record.” He donates, in part, based on seniority. He prefers to give to Republicans if he has the choice but he has donated to Sen. Mary Landrieu, D-La., because she is well positioned to become the chair of the Senate Energy and Natural Resources Committee if she wins reelection in 2014.

“With the seniority position she currently holds and the committee position she holds, it’d be foolish for, I think, our state to start all over with a freshman,” he said, adding she “has done much for our state.”

Doré is the CEO of Doré Energy, a private oil and gas drilling company with properties in Louisiana, Texas and New Mexico. But he struck it rich by building an oilfield servicing and diving company called Global Industries in the 1970s that grew to a $2 billion company by 2007, the year he retired and cashed out of the company. He made $700 million.

For that role, he was dubbed the “master of the clearance sale” by the New Orleans Times-Picayune for buying companies and equipment at cheap prices during the oil downturns of the 1970s and 80s, investments that paid off.

Unknown on the national stage, he is a longtime insider — albeit a quiet one — in Louisiana state politics.

“Bill Doré is, I would describe, enigmatic by Louisiana political standards,” said Joshua Stockley, an associate professor of political science at University of Louisiana Monroe. He “is a far more low key, almost mysterious.”

Instead of throwing a flashy fundraiser, he may have a quiet dinner with one politician once or twice a year, or send a business associate to impress an issue with the politician, Stockley said.

Doré touts that he has the “strongest lobbyist in Louisiana” on his side: Randy Haynie, who has been lobbying for almost 30 years.

“When Haynie…comes up, most anybody is going to listen or take notice of that,” Stockley said.

Doré has only chosen to intervene on a select few legislative items, Stockley said, but when he does, he has proven to be influential.

In 2005 and 2006, he and Haynie pushed for legislation that would let landowners like him sue oil companies in local courts for money for restoration of environmentally damaged lands. He contributed $3,500 to the state senator sponsoring the measure, Butch Gautreaux.

His closeness to former Gov. Kathleen Blanco, a Democrat who he has known since her early days as a legislator, appeared to payoff on the measure. He had donated $13,000 to her campaigns over the years too.

“I did visit with Kathleen on this bill. I did tell her how important it was.”

She got behind a bill that became law in 2006 giving power to the state Department of Natural Resources to determine how much money oil companies would have to pay for cleanup. Doré wanted a law that would be harder on the oil companies by letting courts decide on the amount of the payment, but he still sees it as a victory.

His investment in young politicians shows somewhat of a similar approach to his business dealings — looking out for the long term. In 2007, after consulting with his lobbyist Haynie, he gave about $120,000 to state politicians, records show.

He said he was giving to a wave of young legislators who he thought could make a difference.

He cites current Gov. Bobby Jindal and his staff as an example of the young politicians he thinks are making a positive impact on education reform and other issues. He has given $12,750 to Jindal’s campaigns.

But he has also given money to the former Democratic governor, Blanco, whom he had known since her days as a legislator.

In 2003, he hedged his bet, giving to both Jindal and Blanco when they were running against one another. Jindal lost.

“I had split loyalty on that one.” He’s known Blanco all his life, he said, but Jindal was the best person for the job.

The Lake Charles, La., tycoon is not the typical conservative donor to Santorum, who has said that same-sex marriage discourages opposite-sex marriage. Doré, even though he is a Catholic who is by no means a gay rights activist, has donated to gay Democratic Congressman Jared Polis of Colorado.

Explaining the big donation to Santorum, he said he concedes that Santorum has extreme views on gay rights and abortion. “He and I have had a personal discussion on that,” he said.

But he said, “These are two minor issues to me” when “I look at the worldwide concerns.” He puts importance on Santorum’s family values, which he said means he has good character and without that, everything else about a person becomes questionable.

He said he thought Santorum was the most qualified, likable and personable on the GOP ticket with the best chance to defeat President Barack Obama.

On the phone, he comes across as calm and confident, dispassionately and quickly talking about why he donates. He only became animated when talking about President Barack Obama, describing his policies as foolish. Though Doré supported the Democratic presidential candidate in 2004, John Kerry, he wanted a Republican to beat Obama in order to “put the money back in the hands of the corporations and individuals out there” who are “driving this country.” He said the business sector lacked confidence in Obama.

“$250,000 being a high income individual? C’mon,” he said, referring to Obama’s plan to roll back the Bush tax cuts for that income tax bracket. He added that these are the people with disposable incomes, buying cars and “keeping this country going.”

He said there was no ulterior motive to his donation to Santorum.

“Where’s my return on investment on Rick Santorum? I’m too old to hold a cabinet position,” he said.