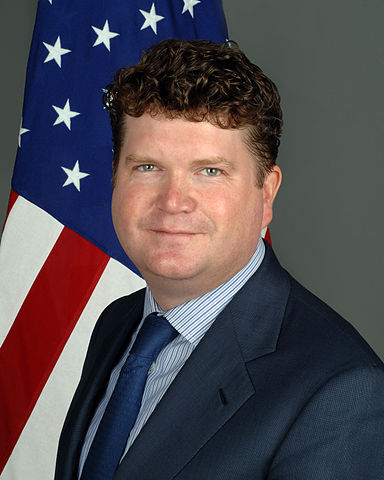 Presidents have long reserved around 30 percent of available ambassadorships for political allies — using plum diplomatic posts in U.S.-friendly nations to function as rewards for campaign loyalty. The widely-accepted practice has persisted for more than a century and generally such nominees have little issue clearing the Senate confirmation process.

However a recent article by the Los Angeles Times points to a recent increase in the nominations of presidential insiders, claiming that an astounding 56 percent of Obama’s second term appointees have been political allies. The latest ambassadorial nominations come before the Foreign Relations Committee the same week that members of another panel, on Homeland Security and Government Operations, will consider the nomination of Obama's former political director, Katherine Archuleta. He's tapped her to head the federal Office of Personnel Management.

Matthew Barzun (pictured right), John R. Phillips and Kirk W.B. Wagar each have bundled at least $500,000 for the president’s 2012 campaign. Obama nominated them to represent United States' interests in the United Kingdom, Italy and Singapore respectively.

Barzun won the highly prized U.K. nomination over Vogue magazine editor (and Obama bundler) Anna Wintour, thanks in large part to his role as the president’s chief fundraising guru in 2012.  The Louisville-based web entrepreneur served as national finance chair of the Obama for America committee and oversaw the efforts that helped raise some $730 million in the 2012 cycle.

However, this is not the first ‘pay-to-play’ ambassadorship for the former keeper of Obama's war chest. The Kentuckian was also a major bundler in the 2008 recycle and was rewarded for his efforts with an ambassadorship to Sweden, which he held until 2011 when he returned stateside to head the Obama campaign’s fundraising operations.

John Phillips and Kirk Wagar are both lawyers and 'super-bundlers' who also maintain close personal ties to the president. The DC-based Phillips specialized in 'whistleblower' protection at the firm Phillips & Cohen and worked closely with congress on the False Claims Act. More recently, he served as Chair of the President's Commission on White House Fellowships. His wife, former ABC TV correspondent Linda Douglass, also served a stint in the White House as director of communications for the Office of Health Care Reform.

The Canadian-born Wagar is a lawyer with the South Florida firm Wagar, Murray & Feit, and specialized in disability insurance prior to his nomination as ambassador to the Southeast Asian city-state. The long-time Democratic booster was Obama's chief fundraiser in Florida.

Neither Phillips nor Wagar have backgrounds in diplomacy.

All three nominees — especially Barzun — appear to have been frequent White House visitors based on names in just-released  visitor logs. Click here for a downloadable csv file of their visits.

All told, big-time bundlers raked in at least $142 million for Obama's war chest in the 2012 cycle, according to data compiled by the Center for Responsive Politics. Thus dozens of individuals have potential claims to such diplomatic posts. The growing cost of modern presidential campaigns means that presidents have an ever-increasing list of IOUs to discharge.

While such appointments generally do not create ripples in the diplomatic sphere, presidential insiders have caused embarrassment for the State Department in recent years. A 2008 bundler whom Obama nominated the following year to serve as U.S. ambassador to Belgium, Howard Gutman, faces allegations of sexual liaisons with underage prostitutes.

However, the practice of rewarding campaign bundlers with cushy ambassador positions shows no signs of stopping in the foreseeable future. To replace Gutman, Obama has nominated another major bundler and Obama insider, Denise Bauer.