On Thursday, August 22nd, South Bend, Indiana became the 15th municipality (and, with a population of roughly 101,000, the smallest!) in the US to sign an open data policy into law. Executive Order No. 2-2013, enacted by Mayor Pete Buttigieg, was largely crafted to introduce a new transparency website, data.southbendin.gov, as a platform for publishing public information — a fairly common motive for cities making this kind of policy.

What’s uncommon about South Bend is not just its size, but the fact that their new policy firmly grounds “open data” in the state’s public records law. 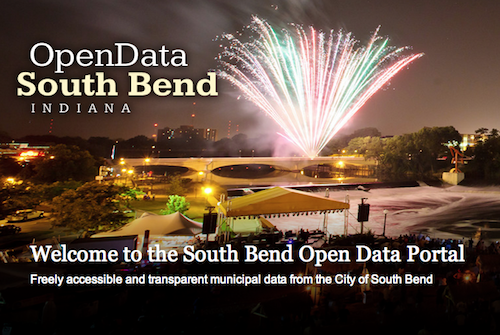 Public records laws and other on-the-books policies that defend and establish standards for public access to information (and control its publishing and quality) form the bedrock on which open data exists. These pre-existing provisions not only create a precedent that can be built on for new policies like the one in South Bend, but can help identify portions of the law that need new clarity and strength. When Texas recently passed a law allowing state legislators to participate in online message boards, they complemented the legislation with a second bill that explicitly underscored that in any setting (personal or professional), electronic communications sent by public officials about government business fall under the state definition of public information. Technically, this precedent already existed, but the language was not as explicit as lawmakers knew it needed to be for their new public-facing decision-making platform to carry weight. This is the opportunity offered to every open data policy: The chance to clarify our common and legal understanding of not just how data is made available to the public, but what information is open to the public.

In the short history of “Open Data” policies, municipalities have drawn on public records precedence at the federal, state, and local level, but usually only to define exemptions to their new policy. Of the cities we’ve surveyed, Madison, Wisconsin seems to be the only other municipality besides South Bend to lean on a public records law to define what data should be made public. Unfortunately, they complement this forward thinking with a laundry list of exemptions.

South Bend doesn’t fall into this trap. Instead, starting with the precedence for “public” information and ending with the technical requirements for implementation, the city crafts layered, but solid definitions of the legal and technical frameworks necessary to give the phrase “open data” meaning.

Although this policy is just a first step for South Bend, it does a good job of securing some conceptual and actionable basics for disclosing public data online. Sunlight is glad to have played a role supporting the local community advocates (including the 2013 Code for America fellows) who helped make this policy a reality, and will continue to watch South Bend’s progress as they move to implement over the next year.

You can view the full text of South Bend’s new executive order accessible below and here: