The first thing to admit is that the title of this post might be a bit misleading. While in the last few months Sunlight was indeed busy researching procurement transparency on many different levels, we’ve never had the intention (or the power) to do holistic international research on procurement transparency, nor did we want to rank countries based on their performance. This would have been an endless – and probably pointless – effort. Our motive behind mapping the global landscape of procurement disclosure trends was to find best practices, powerful online tools and also to gain inspiration for Sunlight’s recently released open data guidelines for procurements.

We also have to admit that government procuring is a complex, fragmented and rather confusing territory. So why care at all? Because it is also an extremely corruption prone process affecting a wide range of sectors and agencies and the GDPs of several nations. And also, because procurement information – though not at all seen as sexy – is an unexplored gold mine for data geeks and the whole open gov community, thanks to its potential to serve as an important linkage between other politically relevant and many times absent datasets such as spending data, company information and even shadow campaign or party funding. Thus we hope that our research findings and open data guidelines may prove useful for our peer organizations, let alone national governments.

Procurement Openness Around the World

Our survey on procurement disclosure practices was sent out to 54 countries to see whether findings of the Organisation for Economic Development (OECD) on procurement transparency matched the observations of the experts in practice. The survey yielded 25 total responses and we ended up accumulating information for 21 countries. Besides Japan and Uganda, all of the countries surveyed are in Europe and the Americas, which is important to keep in mind when drawing further conclusions. Some of our key initial finding include:

Check out more details on our initial results in our spreadsheet and our summary below.

What Information Is Available?

Broadly speaking, we’ve found that procedural information and laws were most easily accessed with the majority of countries always providing such information. From there the trends are more difficult to mark. It does seem, however, that selection and evaluation criteria as well as tender documents and contract awards are published in a promising fashion in most countries surveyed, which is good news for a more fair competition. Keeping track of progress after the procurement bid has been awarded (such as information on contract modifications or procurement spending) is way more difficult. The categories most difficult to find information for are  justifications for awarding contract, data on other bidders and information on contract implementation including details on subcontractors, where most countries do not provide information even when it is asked for. The few notable exceptions are Greece, Colombia as well as the Czech Republic, Hungary, Poland and Georgia where such information is sometimes available.

This may be unsettling since this greatly undermines accountability and makes it almost impossible to connect the dots or improve oversight. Privacy issues and commercial confidentiality are serious – and hard to ignore – factors here, however there are solid arguments for why, how and when those more controversial data could and should be published. (More on that in our procurement open data guidelines and the global principles of the Open Contracting team.) An interesting, and unfortunately rather unique feature of the Georgian tender registry is a publicly available database of blacklisted and whitelisted companies as well as a dispute resolution board which publishes all its decisions online within 10 working days after a complaint is filed. 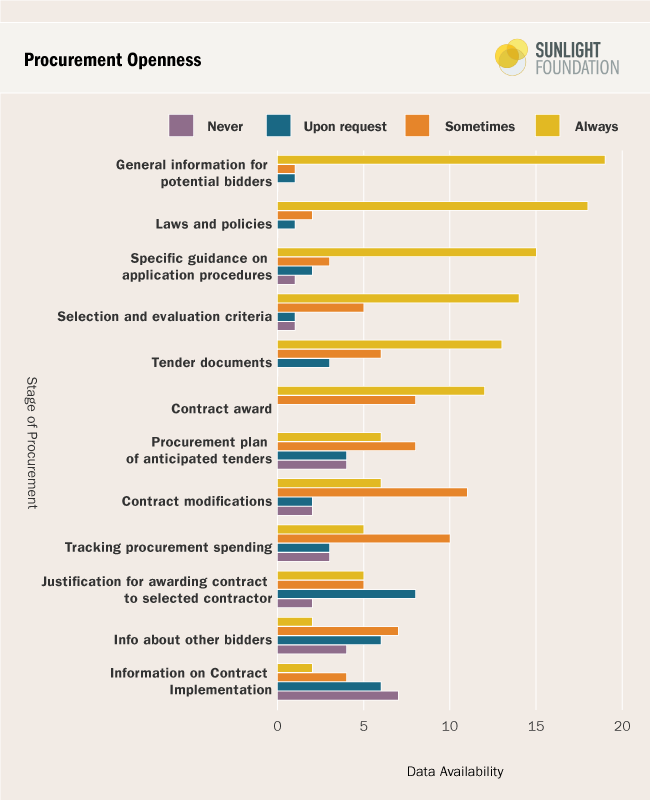 Regarding free online tools built by civil society advocates, most of the platforms we’ve seen are impressive databases that make procurement information more searchable and analyzable. We have already written about the Rospil initiative from Russia or TI Slovakia’s open public procurement website. Some of the other tools, such as Croatia’s website by Marko Rakar from Windmill provide aggregated information on top clients, bidders and most procured sectors. Ukraine’s open procurement database enables extensive research while TI Georgia’s tender platform provides detailed profiles on procurers and suppliers, allows users to view intuitive visualizations of key indicators and also provides bulk download. Most of the tools have no red-flagging mechanisms though, TI Georgia has so far been the only one to check tenders against a set of metrics designed to assess the risk of corruption. (More on that in a later post.) 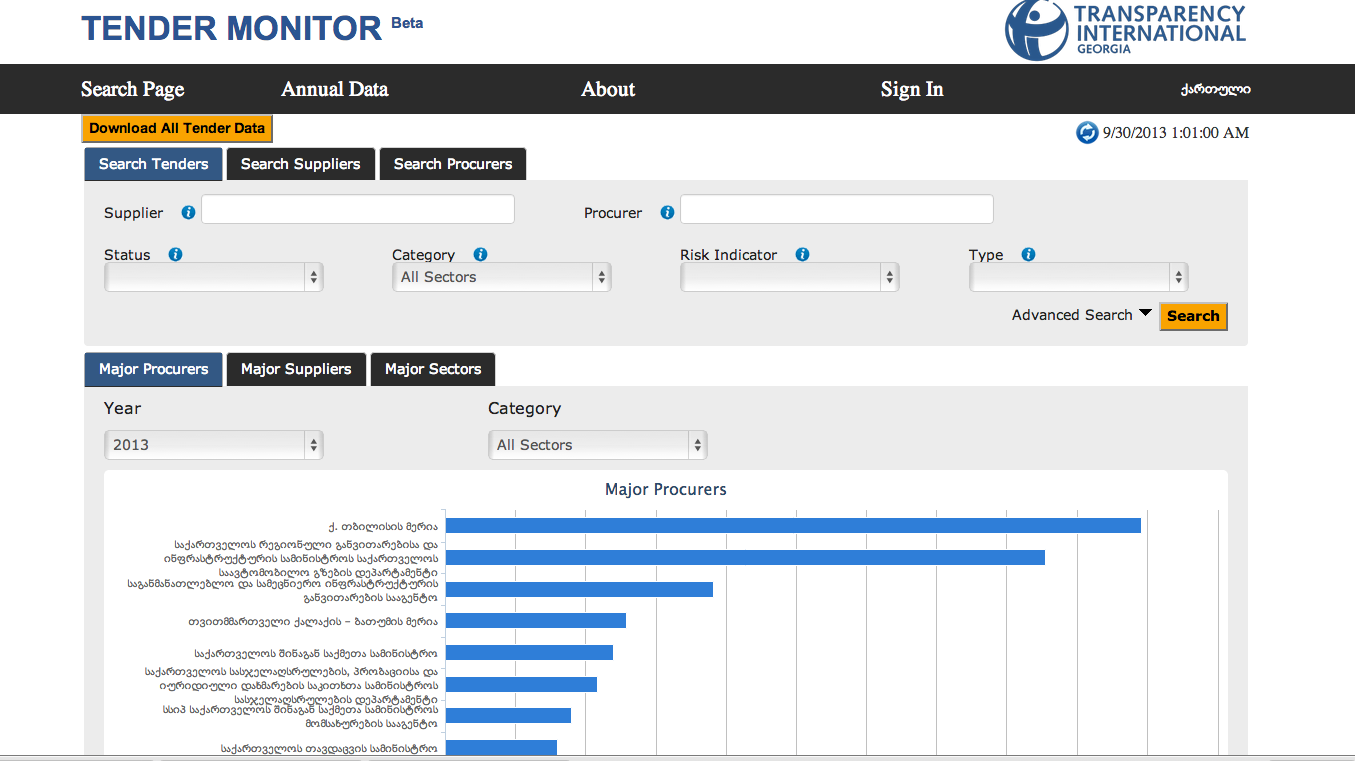 It is worth keeping in mind that procurement transparency is only the beginning. Various forms of corruption that occur in different stages of the procuring process such as bribery, favoritism, collusion or custom-tailored bidding cannot be cured by increased transparency. However, we see procurement openness as a necessary first step in revealing some of those corrupt mechanisms, improving access to the legal loopholes and thus enabling reform and also providing the missing linkage between other, politically relevant datasets.

Therefore, besides trying to map the landscape in African and Asian countries and asking for your contribution to our ongoing research (the questionnaire is still open and waiting for your input), we have started to work more closely with national and regional advocates and implement Sunlight’s guidelines in other countries. Over the next few weeks and months, we’ll be sharing our advocacy efforts as well as introduce some case studies, best practices and online tools from around the world. Stay tuned!

In the meanwhile, if you want to improve your country’s procurement system and feel that Sunlight could help you, get in touch with us through international@sunlightfoundation.com.