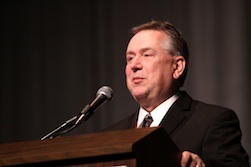 Sunlight's original story raised questions about two identical $7,500 contributions to the congressman — both made on Feb. 21 of this year — from family members of Stockman staffers. However, when one of the contributors was reached for comment on the large donation, she denied having ever given the money.

Now, both contributions have been amended to show that they came from the staffers, Thomas Dodd and Jason Posey, and not their relatives. In an explanatory note attached to the amendment, the campaign cited a "miscommunication with accounting about joint charitable donations and family/personal funds" as the reason for the error.

The campaign's note states that the contributions were actually "erroneously recorded in the other family member's name." The explanation goes on to explicitly state that "This situation did not and does not involve any excessive contributions or the need to reattribute excess contributions to another person."

According to FEC regulations, if a donation is made from a joint bank account, the campaign should attribute it to the signatory or both parties if there are two signatures. The apparent filing error went unnoticed for a span of eight months, until Sunlight's story was published.

"This looks like some contributions were made in violation of the ban on straw donors," said Paul Ryan, the Senior Legal Counsel at the Campaign Legal Center, when presented with the details of the contributions and amendments by Sunlight. Ryan explained that while the Federal Election Commission may be more lenient with campaigns that self-report violations, the reporting "does not somehow negate or erase the violation."

Melanie Sloan, the Executive Director of Citizens for Responsibility and Ethics in Washington, a government ethics watchdog group, stated "there's clearly something that merits an investigation here" in an interview with Sunlight. "If a contribution was really made in the name of another you have a conduit contribution scheme … if they were solicited and forced to donate then that's a crime."

The Stockman campaign has struggled with debt since the Texan's successful comeback bid in 2012. The committee's most recent FEC filings  show that it owes more than $160,000 as of Sept. 30. Of that amount, some $64,010 is owed in back pay to individuals who worked on the campaign. The balance, $94,000, is a loan made by Stockman himself.

Some of those debts are owed to curent employees of Stockman's House office. Donald Ferguson, who is the Texas lawmaker's communications director, is still owed $15,000, while his legislative assistant, Brad Lewis, is still owed $7,810 from his campaign work.

Although disbursements show that both Thomas Dodd and Jason Posey worked on the campaign, neither is owed any money.

Their $7,500 contributions to their boss' campaign are particularly generous given their staff salaries: A review of House disbursement data shows that Dodd earned $24,972.24 in two quarters of working on the House staff, while Posey pulled in $29,666.67 during the same time period.

Interestingly, while the staff directory of the House of Representatives shows that Thomas Dodd was a member of Stockman's House staff at the time of the donation, his listed employer on the amended contribution is Dodd Associates. Posey's listed position is Congressional Liaison.

Attempts to reach Thomas Dodd for an explanation of his original denial of the contribution were unsuccesful. An e-mail to the congressman's communications director also went unreturned.