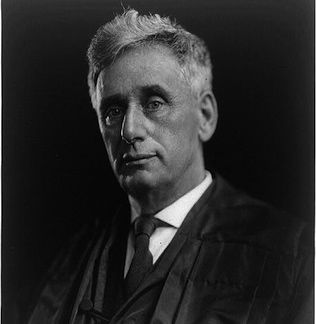 Today is the 157th anniversary of the birth of Louis Brandeis, a trailblazing advocate for civil liberties, individual rights and, yes, sunlight.

For us, it’s a day to celebrate and take stock of our mission, for Brandeis is our inspiration: The Sunlight Foundation takes its name from one of his most famous observations.

In a Harper’s Weekly article published 100 years ago next month, the future Supreme Court justice used an arresting metaphor to describe one of the keystones of his legal philosophy:

“Publicity is justly commended as a remedy for social and industrial diseases. Sunlight is said to be the best of disinfectants; electric light the most efficient policeman.”

As we have previously noted in this space, this crystallized years of thinking on Brandeis’ part about the role that transparency plays in democracy. And it is the thinking that led to the creation of the Sunlight Foundation seven years ago.

From our developers to our journalists to our communications and policy specialists to our fundraisers and our administrators, everyone who works at Sunlight shares a common belief that the more people know about the society in which they live, the better that society will be for all of its members. And just as Brandeis embraced the new technology of his day, we have embraced the new technology of ours. Our “electric light” is data, which we believe will help illuminate how our complex society works, and when it does not. Our policy staff tries to liberate it; our developers turn it into tools that ordinary citizens — including those who don’t have computer programming degrees — can easily use and our reporting team turns that into stories, both for our website and for those of other news sites whose journalists work with us.

Some of our accomplishments since the last anniversary of Brandeis’ birthday:

We’d like to think that we have made Brandeis proud. But it also occurs to us that no birthday should pass without a few little gifts. Because, while information may want to be free, the hard work of liberating it and turning it into useful tools and meaningful stories isn’t. All of the above is made possible by the generosity of our donors. It doesn’t take much to join their ranks. If you like any or all of what you see above, consider a Brandeis birthday donation to support Sunlight’s work.

Don’t have the money but have the time? Check out some worthy projects that could use your help.

In honor of Louis Brandeis, the Sunlight Foundation thanks you!