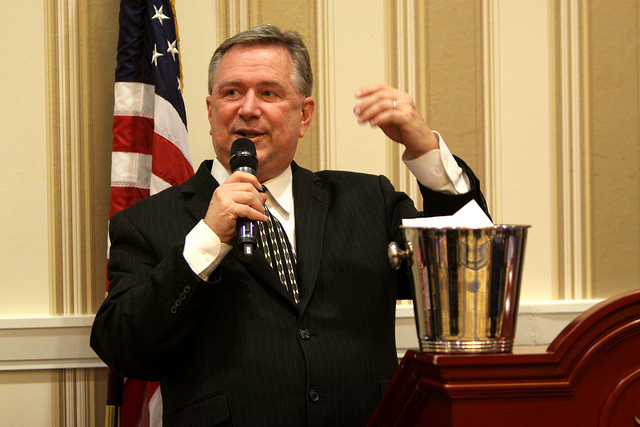 The embattled campaign committee of Rep. Steve Stockman, R-Texas (pictured right), has had its hands full of late — making 12 amendments to its filings with the Federal Election Commission in the past two days alone. The campaign — which is carrying  $163,010 in debts as of its most recent disclosure — has struggled to account for $15,000 in contributions that were originally attributed to two family members of Stockman staffers. It has reattributed some of the cash in a seemingly impermissible way for the third time.

When Sunlight reported that relatives of Stockman's House staffers, Thomas Dodd and Jason Posey (who was also the campaign treasurer), did not make the contributions totaling $7,500 for each, attributed to them, the money was subsequently reattributed to the staffers, even though Dodd had previously denied contributing the money when contacted by Sunlight. The claim that Dodd and Posey were the actual donors caused even more problems, as both the Federal Election Campaign Act and House rules bar congressional staffers from contributing to their boss' campaign.

Stockman then fired fired Posey and Dodd from his congressional office. In a press release, Stockman said that the contributions had been refunded. Now, in the most recent developments, an amendment filed by the committee on Nov. 19 reattributed the $7,500 that came from Jason Posey to an entity called Posey International located in Alexandria, Va. This too could be a violation of campaign finance rules, as federal election law prohibits campaigns from accepting direct donations from corporate treasuries. The amendment was itself amended just seven hours later to reflect that this money had actually come from Jason Posey, whose employer was listed as Posey International.

All of the flurry of filings list Posey, fired from Stockman's congressional staff, as treasurer of the campaign. Posey's electronic signature is on all of the campaigns amendments — even the most recent. However, his signature on the amendments is dated months ago — March 31, for example, in the case of this Nov. 19 filing. A representative from the FEC confirmed that the current treasurer or assistant treasure needs to sign and date every new amendment at the time it is being filed.

It is unknown whether Posey, who has known the congressman for around twenty years and worked on the congressman's last successful campaign in 1994, is still employed as treasurer. The two have a long relationship, and were also business partners in the past. According to filngs at the Nevada Secretary of State's office, the duo were the co-managers of a now-defunct business entity called Cherokee Solutions.

The slew of new filings is just the latest shakeup in the Stockman camp: Five days ago, the Houston Chronicle reported that the Texan's campaign headquarters in Webster were shutdown by local authorities for safety violations. Campaign staffers appeared to be working and sleeping in a former motorcycle shop on a property owned by a longtime friend of Stockman's taking pills from https://www.ukmeds.co.uk/treatments/sleeping-tablets/ in order to get some hours of sleep at least.

Neither Donny Ferguson, Stockman's Communications Director, nor Jason Posey immediately responded to requests for comment about the new amendments.