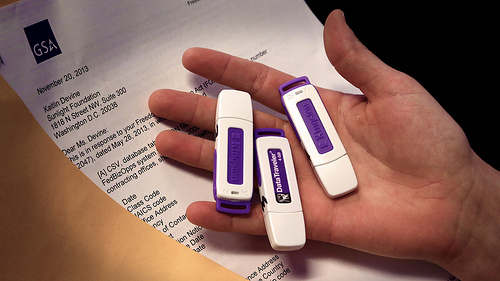 Just two days after the filing of Sunlight’s first lawsuit, and after more than five months of agency recalcitrance, we received the documents we sued for under the Freedom of Information Act. These documents include more than a decade’s worth of solicitation and award notices from FBO.gov, and we made them available to the public for downloading below.

The notices are broken out into two parts. One file has records with the unique id for each notice, and almost all of the related data fields. The other file with the _desc suffix has the unique id for each notice and a longer prose field that includes the description of the notice. Additionally, the numbers at the end of the file name indicate the year range. So, fbo_data_archive_00_04.csv is for the years 2000-2004. The first files, fbo_data_active.csv, contain all the active solicitations in FBO.gov right now.

Download the files we received from our FOIA request to the General Services Administration:
NOTE: These have been updated to include previously redacted information. Please see this post for more information.

Unfortunately, the GSA refused to disclose the contact information for contracting officers from the Department of Defense and the Department of Homeland Security, citing FOIA exemption 5 U.S.C S 552(b)(6), an unwarranted invasion of personal privacy. These contract officers make their emails public on each solicitation they post on FBO.gov, thus their emails have already been made public at one time. We’re also unsure why contracting officers from two specific departments warrant this exception, but others don’t.  We will likely raise this issue before the D.C. District Court judge.

Despite the partial denial, these notices will allow the public and Sunlight’s developers to do a close analysis of government contracting patterns. They include information about who is granting contracts, to whom contracts are being granted, what is being contracted for, and how much those contracts are worth. This will allow us to look for connections and patterns that could implicate government waste or corruption. It will also allow us to analyze the accuracy of information that the government is reporting elsewhere, including on USASpending.gov.

This is a promising start for our FOIA litigation. As the drafters of the Freedom of Information Act realized, sometimes, unfortunately, in order to force agency action on a document request, you just have to go to court.

We invite the public to take a look at this the contract notice data and let us know what your analysis reveals.