Making data a pain in the ass to access does virtually nothing to stop a criminal. But it does a lot to thwart accountability.

Today, personal financial disclosures from politicians and a number of other civil servants spanning 2013 are due. These disclosures are required under the Stop Trading on Congressional Knowledge (STOCK) Act. Unfortunately for those of us who would like to know what information is contained in these documents, we won’t actually know anything about most of the disclosures for at least a month, and in other cases for much longer. And because of the arbitrary barriers between the public and the filings, we may never find the secrets that lie therein.

The STOCK Act clarifies that government officials, from the president to congressional staff, can’t profit from non-public information, such as pending legislation. The financial disclosures are public, which is necessary for identification of conflicts of interest and for holding unethical officials accountable.

So what’s with the delayed disclosure?

Originally, the STOCK Act required online filing and online disclosure. But then the law, passed in 2012, was amended (read: gutted) in 2013 to exclude, as Reuters reported, “thousands of top military officers and civilian government officials from having to post [online] their financial assets such as bank accounts, stock and mutual fund holdings and investment properties.” Further, as Sunlight blogged at the time, it “made electronic filing of the information optional and struck the requirement that online information be searchable, sortable and downloadable.”

In other words, if you want to know the information in these disclosures, you won’t find it online. At least, not until the likes of journalists and organizations like the Center for Responsive Politics obtain it and make it accessible, either in news reports or in CRP’s excellent PFD database. For the many members of Congress getting extensions, it will take even longer.

Some quick facts about the repeal of that critical provision in the STOCK Act:

Transparency is key to holding the government accountable. But it also requires enormous legwork on the part of the apparatuses around the government, from citizen journalists to advocacy groups. It’s why the people at Sunlight spend so much time building tools. It’s not enough to just do policy work. And it’s not efficient to just do reporting. 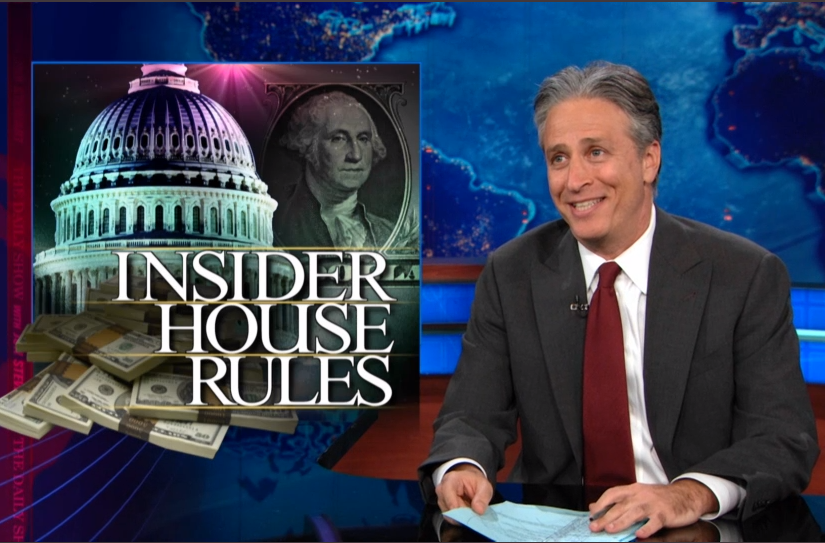 For a video that might make this post more palatable, check out Jon Stewart’s take 1 and take 2. (PS: These videos contain some NSFW language, so watch at your own risk!)

In short, this information should have been easily publicly accessible, and designed to enable actual utilization of the data. Gutting the bill ensured precisely the opposite. Indeed, it did a great deal of damage to the ability of Sunlight developers and other civic hackers to make this data accessible and useable for the laypeople, reporters, prosecutors, inspectors – otherwise known as all the people that need it.

Optional electronic filing and the repealed provision requiring online posting of filings serve as nothing but an enormous wall between the public and the information we deserve.

The changes were a knee-jerk reaction to claims that online disclosure might render filers susceptible to criminal activity. Even if this was true, the fact that this potentially sensitive information was already public – and in theory still is, if you count a filing cabinet as public – means the changes public servants need for their safety are utterly unachieved by simply obscuring the data.