We are celebrating September with blog posts and an event dedicated to improving the ways the public learns about how influencers get their voices heard in Washington. Complete, systemic overhauls — such as public financing or a Constitutional amendment — get the headlines, but less dramatic fixes can go a long way toward creating a more informed public with, hopefully, a better shot at bipartisan consensus.

The Real Time Transparency Act (S. 2207, H.R. 4442) is one bill that would, with a mere tweak of the current disclosure system, dramatically improve disclosure of big contributions to campaigns. It’s such an easy fix, we honestly can’t understand why anyone would object. 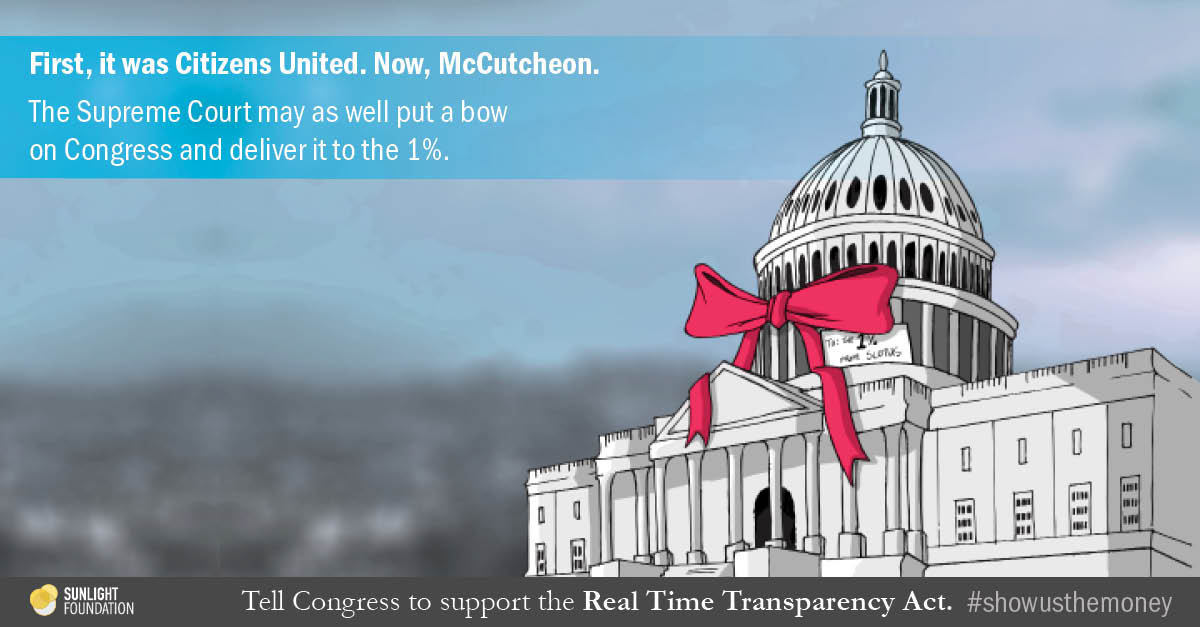 It’s time to update disclosure for the 21st century. Agree? Pick up the phone and call Congress today!

Current disclosure laws require a candidate’s principal campaign to notify the FEC within 48 hours of all contributions of $1,000 or more given during the last 20 days of an election. But outside of that 20-day window, the public has to wait for monthly or quarterly campaign finance reports to find out who the big givers are. The RTTA recognizes that large contributions are relevant not just in the days before an election, but before hearings and votes, lobbyist meetings and fundraisers. That’s why the RTTA simply eliminates the 20-day time frame, mandating 48-hour notification of large contributions whenever they are made. To close potential loopholes, the bill’s notification requirements would apply to all political committees — including joint fundraising committees — and it would ensure that the $1,000 threshold is cumulative, to avoid multiple undisclosed $999 contributions. Finally, it would require Senate candidates to, at long last, file their campaign finance reports electronically.

Opponents of the bill may try to claim that 48-hour reporting is too burdensome for campaigns. That’s a tough argument to make when candidates running multi-million dollar campaigns already have the software and consultants that enable them to comply with the 48-hour rule in the last, heated, frantic days of an election. The same consultants using the same software can easily extend the scope of their reporting of large contributions so that it takes place year-round.

Read up on the bill, see relevant information and more on OpenCongress.

On the other hand, even the most vocal opponents of campaign finance reform have voiced their support for real-time transparency. Sens. Mitch McConnell, R-Ky., and Ted Cruz, R-Texas, both have advocated unlimited contributions coupled with immediate disclosure. And while we haven’t quite reached the point of unlimited contributions (and Sunlight is not suggesting we go there) since the McCutcheon decision eliminated the overall ceiling on contributions, there is very little left in terms of a cap on what donors may give directly to candidates and parties. Since we are more than halfway there, perhaps it’s time that McConnell, Cruz and others who have called for robust disclosure in lieu of limits put there money where their mouth is, so to speak, and support the RTTA. For those on the other side of the spectrum, there is no reason not to champion real time transparency as an important first step while continuing to fight for other reforms.

The Real Time Transparency Act is just one of a number of bills that can, with a relatively light touch, greatly improve transparency of money in politics. Stay tuned to read about other legislative reforms and join Sunlight and ReThink Media, with special guest Sen. Jon Tester, D-Mont., on September 16 for a wide-ranging discussion on other options as we discuss “The Price We Pay for Money’s Influence in Politics.”