Sunlight’s criminal justice project is in the process of creating a catalog of criminal justice data nationwide. So far, we have collected metadata on what datasets, publications and reports are available from all corners of the criminal justice system in over 38 states and the District of Columbia!

Through this work, we have discovered gaps in what data the criminal justice system makes available and have celebrated triumphs of data release. In this blog post, we would like to give you an update on some of the great data resources we have come across throughout our research.

The Collaborative was established in 2009 with a focus on early childhood education policy. In researching these issues, the Collaborative became frustrated with the lack of open data available to the public and began working to make such information more accessible. That experience is especially relevant to the world of criminal justice data, where even bulk data downloads, while ideal, are limited in their utility to more tech-savvy users. The public-private partnership between the Collaborative and the legislature has been an important step in increasing awareness in Connecticut of the issue of racial profiling by police in traffic stops, simply because the data is now open. 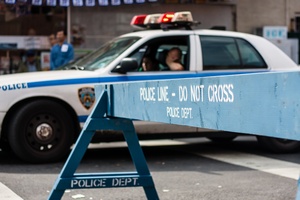 Explore Sunlight’s new criminal justice inventory, with data collected for 38 states, the District of Columbia and the federal government.

It has also given officers and police departments more standardized data to rely on for performance measures. As a result, traffic stop data is available internally as part of the state’s criminal justice information sharing efforts. Despite the legislation mandating the collection of data digitally, each police department runs off of a different records management system (RMS) requiring standardization of the data before analysis. The Collaborative’s third-party standardization and cleaning has even uncovered data duplication issues with a particular RMS, leading to the correction of a problem that may not have been discovered without this partnership.

The data available from the portal represents all traffic stops in Connecticut over the course of a year. Due to the data being sourced from over 100 local police departments it must be standardized, cleaned and analyzed by the Collaborative before being published. The Collaborative plans to implement quarterly releases of this data in the near future. In addition to allowing for bulk download of the data, the portal has visualization features and posts the project’s data analysis reports. The Collaborative is also working to improve the quality of data collected by officers during stops, like including the length of officer-citizen interactions.

Although the circumstances surrounding Kalief Browder’s untimely death last month reignited the debate over the use of solitary confinement in prisons, readily available data on its prevalence nationally remains sparse. Colorado, a state with its own unfortunate history in regards to solitary, is a rare exception. The Colorado Department of Corrections is mandated by legislation to collect and share statistics on the use of solitary confinement in its facilities. That information is made publicly available online in the form of an annual report.

When SB 11-176 was introduced in 2011, administrative segregation — more widely known as solitary confinement — was the default placement for many Colorado inmates with developmental disabilities or mental health needs. Inmates with such needs were increasingly being placed in solitary, and nearly half were being released directly into the community without having time to readjust to human interaction. As the state’s corrections chief noted after experiencing it first-hand, “something is inherently wrong with that.”

While Colorado’s Department of Corrections continues to pursue solitary confinement reforms, it is held accountable by making its path towards progress apparent in the reports it regularly issues on the topic. Since the legislation mandating the reports was signed by the governor in June 2011, the number of inmates in administrative segregation has dropped from a peak of 1,505 in September 2011 to 215 in June of 2014.

Over the course of our research, we have become familiar with what kind of data to expect to be made publicly available by local law enforcement. For larger, open data minded cities, we often encounter data portals where users can view crime counts, rates or trends. For most local police departments, we uncover a few annual reports or basic crime statistics in PDF format hidden in the depths of the department’s website. Virginia Beach, however, exceeded our expectations.

Most importantly, this data is updated every four hours and is free to all users!

We hope to find more portals like ePRO throughout our research of local police departments. If you know of a portal that we have have missed, be sure to let us know!