On Tuesday, the Sunlight Foundation joined representatives from eight other open government advocacy organizations and more than a dozen federal agencies in Washington at the National Archives for a series of lightning talks focused on the next round of open government plans. As we highlighted in July, long-awaited White House guidance set a deadline of Sept. 16, 2016, for agencies to answer a series of questions about their progress since President Barack Obama issued his Open Government Directive and publish the next plans mandated by his 2009 executive order. What we heard at the National Archives on Tuesday inspired both hope and concern.

For instance, the Department of Homeland Security touted an eFOIA app for iOS and Android launched last July that was developed with no clear demand. In the year since, it’s been downloaded a total of 2,316 times since launch, with an average of five uses per month to submit a FOIA, and 137 uses to check the status of a request. For context, DHS received over 281,000 FOIA requests in fiscal year 2015. The agency effectively denied Mike Morisy’s FOIA request for evidence of user-testing and the contract behind it.

The U.S. Trade Representative pitched Trade Promotion Authority as its flagship open government initiative and will “develop public engagement guidelines on public access to information regarding negotiations.” It was good to see them at the National Archives talking about open government, but it’s worth noting that the /open page for the U.S. Trade Representative currently is empty. That’s right — no plan, no links, no contact information. We hope it will get a draft plan up for consultation as soon as possible and tell us more about plans for transparency and what they learned from using Medium to share the Trans-Pacific Partnership deal.

Similarly, while it’s good to hear the continued focus on the proposed “release to one, release to all” FOIA policy from the Office of Information Policy, we hope that it will dream a bit bigger than a “self-assessment toolkit” for agencies to use on FOIA. We suggest surveying FOIA requestors, disclose their feedback and use it for improvement. We’d also like to see Sunlight’s recommendations for the Justice Department’s next open government plan incorporated, particularly with respect to the Foreign Agents Registration Act. 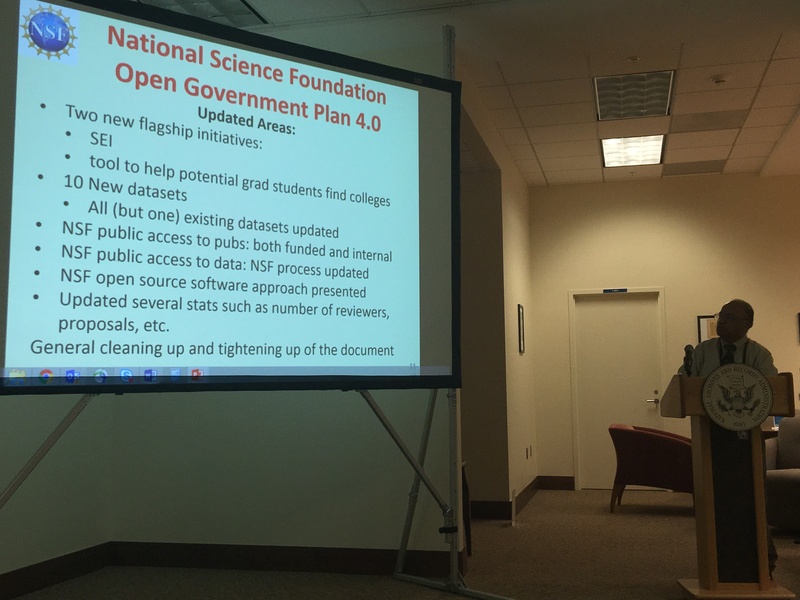 Other agency representatives, from the State Department to NASA to the National Archives and Records Administration, made explicit connections between open government and their mission that were critical, going beyond using technology and initiatives to ground the work in transparency, accountability, collaboration and increased public knowledge.

“We’re moving from being gatekeepers of our records to gardeners,” said Meredith Steward, a management and program analyst at the Office of Innovation at NARA, exploring how the nation’s record-keeper was using online platforms to digitize and curate information with the public’s assistance.

“Any publications that came from National Science Foundation funding from 2016 on will be publicly accessible,” said Jose Muñoz, commenting on the open access policy mandated by the White House’s 2013 directive to agencies to increase access to federally funded scientific research online.

The Office of the Director for National Intelligence told us to expect a unified open government plan in “the next couple of weeks.”

The Peace Corps is setting a notable high bar in its plan: to reduce and ultimately eliminate the FOIA backlog. While we’re glad that the open government working group experimented with lightning talks and created an opportunity for advocates and federal open government leads to mingle, we’re disappointed that there was no audio or video record of the presentations, particularly given the location within the National Archives “Innovation Lab.”

You can view Sunlight’s presentation and download (PDF) all of the slides from the talks through the White House’s open government discussion group, but in every case you’ll miss out on what the presenters shared verbally.

For instance, the Project on Government Oversight’s Sean Moulton only shared a title slide, which means his useful recommendations on the Freedom of Information Act, federal spending data and encouragement to reach higher for agency “flagship” initiatives were only for the benefit of those people present. The slides of other presenters provide more detail, as with the Union of Concerned Scientists’ focus on proactive disclosure in science-based rulemaking, Government Accountability Project’s highlight of whistleblower protections, OpenTheGov.org’s recommendation to tie federal grants from the Justice Department to adoption of bodycam policies, or the Data Coalition’s presentation on open data and the DATA Act.

Chalk this one up as a missed opportunity to inform a deeply skeptical public of the dedication of public servants who deserve recognition for their work in the trenches. We hope that all of the presenters, inside and outside of government, will post their slides, share what they’re working on using their websites and social media platforms, and invite feedback.

As the United States prepares for a transition between presidential administrations, these plans represent one of the important mechanisms for baking open government further into how our administration works. The State Department, the Social Security Administration, Environmental Protection Agency, NASA and the National Archives have already asked for feedback on their open government plans. We look forward to seeing what the other agencies commit to working on.