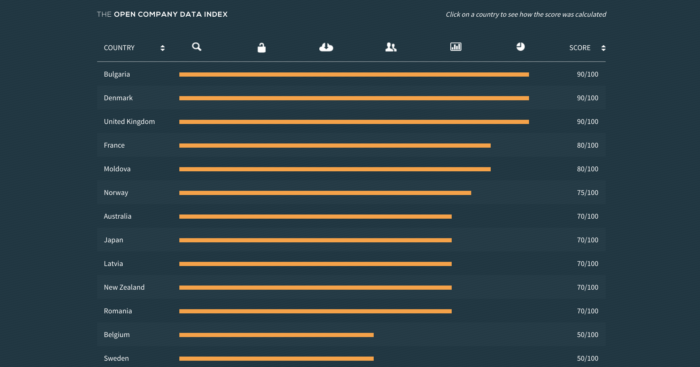 For many people working to open data and reduce corruption, the past year could be summed up in two words: “Panama Papers.” The transcontinental investigation by a team from International Center of Investigative Journalists (ICIJ) blew open the murky world of offshore company registration. It put corporate transparency high on the agenda of countries all around the world and helped lead to some notable advances in access to official company register data.

The Panama Papers is the biggest data leak of our time to date, comprised of 2.6 terabytes of data with 11.5 million files containing information about more than 210,000 companies in 21 offshore jurisdictions. The top jurisdictions for registering shell companies were the British Virgin Islands, Panama, Bahamas, Seychelles, Niue, Samoa, British Anguilla, Nevada, Hong Kong, and the United Kingdom.

While most companies are created and operated for legitimate economic activity,  there is a small percentage that aren’t. Entities involved in corruption, money laundering, fraud and tax evasion frequently use such companies as vehicles for their criminal activity. “The Idiot’s Guide to Money Laundering from Global Witness” shows how easy it is to use layer after layer of shell companies to hide the identity of the person who controls and benefits from the activities of the network. The World Bank’s “Puppet Masters” report found that over 70% of grand corruption cases, in fact, involved the use of offshore vehicles.

For years, OpenCorporates has advocated for company information to be in the public domain as open data, so it is usable and comparable.  It was the public reaction to Panama Papers, however, that made it clear that due diligence requires global data sets and beneficial registries are key for integrity and progress.

The call for accountability and action was clear from the aftermath of the leak. ICIJ, the journalists involved and advocates have called for tougher action on prosecutions and more transparency measures: open corporate registers and beneficial ownership registers. A series of workshops organized by the B20 showed that business also needed public beneficial ownership registers.

Last year the UK became the first country in the world to collect and publish who controls and benefits from companies in a structured format, and as open data. Just a few days later, we were able to add the information in OpenCorporates. The UK data, therefore, is one of a kind, and has been highly anticipated by transparency skeptics and advocates advocates alike. So fa,r things are looking good. 15 other countries have committed to having a public beneficial ownership register including Nigeria, Afghanistan, Germany, Indonesia, New Zealand and Norway. Denmark has announced its first public beneficial ownership data will be published in June 2017. It’s likely to be open data.

This progress isn’t limited to beneficial ownership. It is also being seen in the opening up of corporate registers . These are what OpenCorporates calls “core company data”. In 2016, more countries started releasing company register as open data, including Japan, with over 4.4 million companies, Israel, Virginia, Slovenia, Texas, Singapore and Bulgaria. We’ve also had a great start to 2017 , with France publishing their central company database as open data on January 5th.

The rise of open company data to power investigations

At OpenCorporates, we are passionate about the potential for open corporate data to create a hostile environment for criminal use of companies and to power investigations, whether into corruption, fraud, organised crime, or asset recovery.

Here are some of the highlights.

Shortly after the Panama Papers came out, journalists from El Pais broke a story that led to the resignation of José Manuel Soria, the Minister for Trade & Industry of Spain. The story (see details here and here) is that Soria was discovered in the Panama Papers, but denied any connection to the Bahamas company in referenced in them. It turns out that a company of the same name, UK Lines Limited, had been incorporated in the UK, with officerships linked to him and his family. Further investigation into this company and another UK one, Oceanic Lines Limited, used company filings and shareholder documents to show that these were indeed connected with Soria and his family. Newspaper El Mundo nailed the case, showing Soria was also director of a Jersey company when he was already a politician.

While the main credit goes to the journalists who tracked the story down, there is an irony in Soria being brought down in part by open data. The Spanish Company Register is locked behind a paywall! You can’t even search to see if a company exists without giving your credit card. They have been adamant that they will not open up the register, much less make it available as open data. Not surprisingly they score zero on the Open Company Data Index.

Research by Thomson Reuters and Transparency International UK using OpenCorporates data, data from World-Check, Offshore Leaks from the ICIJ, and the UK Land Registry) found that there is no data available on the real owners of more than half of the 44,022 land titles owned by overseas companies in London. This is concerning. Nine out of ten of these properties were bought through jurisdictions like those found in the Panama Papers.

Another powerful story was from La Presse Canada. By running the records of video lottery terminal licenses through the OpenCorporates data, they found organized crime controls parts of the Québec’s video lottery terminal (VLT) industry.  There are an disproportionate amount of terminals in vulnerable communities. This story went viral and led to the government committing to investigate it further.

Despite such investigations, calls for more transparency into the affairs of the corporate world, and some significant advances, company data continues to be one of the least open datasets in the world. The work of OpenCorporates is changing that, country by country. While we saw many significant advances in access to data in 2016,  there have also been a few backwards steps.

This year, for example, Gibraltar and Tanzania shut down their doors to transparency, with the latter moving behind a paywall. With Gibraltar, it’s even worse: not only is it no longer possible to access data from Gibraltar corporate register, they’ve also made it difficult to access gazettes anymore. Gazettes are supposed to be public notices! It’s a highly irregular move. This action should be a red flag to anyone doing business with Gibraltar-incorporated companies.

Spain remains a black hole for public access to company data. In October, Spain hosted the International Open Data Conference. Spanish civil society had been skeptical of this move because of the lack of movement from Spain on open data. Despite revelations in Panama Papers and campaigning from civil society , however,  the company register remains closed. Spains open data portal lacks any substantive open data sets and has many PDFs, the lowest form of open data.

Despite the signs of lack of commitment and poor performance we observed, speakers from Spanish government at the conference insistedthat  Spain was one of the best performers in Europe. OpenCorporates, Web Foundation, Transparency International joined many Spanish civil society groups, including Civio and Info Access, on an open letter to ask Spain to do more. No official response has been received to this day, despite the letter being hand delivered — twice.

In the area of beneficial ownership, often talk by politicians has not been failed followed by actions. After the European Commission recommended that beneficial ownership registers should be public in every European member state as part of the revision to the 4th Anti-Money Laundering Directive, the national governments watered it down.  Notably, the removed mandatory public access, thus enabling precisely the sort of behavior the Panama Papers exposed. This makes life easier for criminals, corrupt politicians and fraudsters, and more difficult for legitimate business.

It’s so critical that the world continues to push for genuine corporate transparency and access to company registers as open data in 2017.

Hera Hussein is the Community and Partnerships Manager at OpenCorporates, the world’s largest open database of company information. She’s an advocate for open data and open culture.