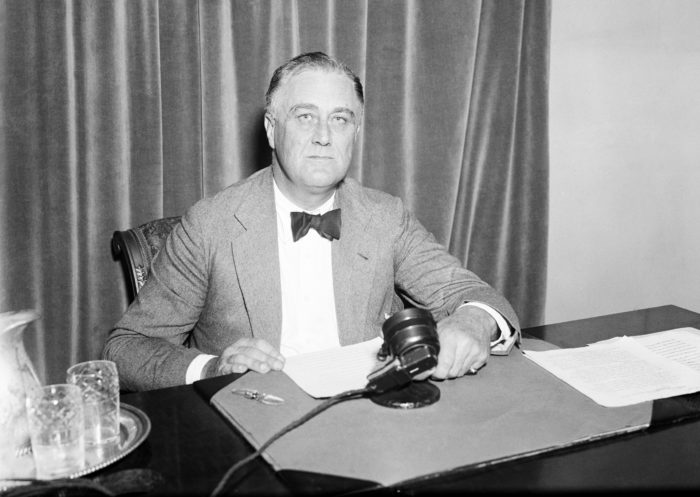 In 1932, President-elect Franklin Delano Roosevelt confronted a nation in crisis. Some 25% of Americans were unemployed and many Americans had lost faith in their economy and institutions. Roosevelt knew his Administration would have to take bold steps to maintain America’s stability and get the country back on trade. He decided he could not act without gaining the trust of the American people, as measured by confidence in his reliability and ability. Roosevelt’s subsequent efforts to build trust, his empathy for the American people, and his focus on collective solutions to shared problems contrasts dramatically with the distrust and dissension fomented by President-elect Donald J Trump.

Rooselvelt recognized that many Americans feared big government and such fears could undermine his Administration’s efforts on their behalf. Some Americans thought he was a radical socialist, while others thought socialism was the only answer to capitalism’s peaks and valleys. Thus, he knew he must build trust in his integrity and his actions. Roosevelt told the public he would be honest about the nation’s economic peril. He declared himself open to trying a wide range of solutions to stimulate growth. He argued that he had taken similar steps as Governor of New York, and these policies had helped New Yorkers.

Moreover, he signaled that he would not take their trust for granted. He made it clear that voters could hold him to account by rejecting him if his plans failed to help them. To Roosevelt, trust was a confidence and competence feedback loop. If he could gain Americans’ confidence, they would be willing to risk the new ideas he proposed. If he could show government was competent, they would accept a more activist role for government in the economy.

To that point, Roosevelt proposed that the United States government employ Americans in temporary jobs such as building roads or teaching the arts. Although these new jobs would directly benefit only a few Americans, they would have important spillovers for the economy and social stability. As the newly employed gained income, these workers would buy more goods and services, and in so doing, would encourage private firms to hire more personnel as well. In turn, these private sector employees would purchase more goods and services. Society as a whole would benefit from greater consumer demand. In short, by collaborating, Americans could create a cycle of growth and confidence.

President Donald J. Trump also wants to bring change, but in contrast with Roosevelt, Trump has fomented distrust and division. He has bullied a wide range of corporations, by his actions and tweets. He has signaled that the president will be the main negotiator and sole authority. He has put forward plans for massive deregulation of the economy and to eliminate the centrality of the United States as a global force for democracy, free markets, and political stability.

He has refused to make his business interests or tax returns public, ignoring potential conflicts of interests and making it almost impossible for citizens to hold him to account.

Moreover, he creates distrust among Americans by fostering hostility among various ethnic, racial and interest groups. By constantly criticizing longstanding institutions, whether trade agreements, American intelligence agencies, or historical alliances, he effectively says our government has failed us. He signals that he is the only one who can fix these problems because while others are losers, he is confident and competent. But he never fully delineates how his ideas such as replacing trade agreements with protectionism, fomenting distrust of intelligence agencies, or ending membership in the United Nations or North Atlantic Treaty Organization will make Americans more prosperous and secure.

Not surprisingly, many Americans remain unconvinced of his confidence and competency. On January 3, 2017 the polling organization Gallup reported that as only 46% of Americans polled are confident in his ability to handle an international crisis. Only 47% think he would use military force wisely. Trust in the Trump presidency has fallen in the month since. Presidents Obama, Bush and Clinton, in contrast, received confidence ratings of 70% regarding crises and the use of force.

Roosevelt set his Presidency on a path to success from the beginning by working to build trust among government officials and the people they serve. Trump puts his future Presidency at grave risk by his inexplicable failure to build trust.

By fomenting distrust and dissonance, he guarantees many Americans with respond with gridlock and animosity, unwilling to take a leap of faith in his ideas.

Susan Ariel Aaronson is Research Professor and Cross Disciplinary Fellow at the George Washington University, where she teaches corruption and good governance.