In 2017, the City of Buffalo improved their new open data policy by bringing people into a regulatory process earlier on in the process in a way that wasn’t possible before the public was connected by the Internet.

Buffalo gathered public comments for its open data policy, using OpenGov Foundation’s Madison tool, an open source platform which enables people to annotate draft legislation or regulations. By putting up their policy online and obtaining feedback, the city engaged residents who would not have been “at the table” otherwise, creating a policy that is more responsive to public needs.

Buffalo is just one of the cities Sunlight has worked with through What Works Cities, many of which have used tools like Madison to obtain input from the public about their open data policies. This collaborative “crowdlaw” approach to developing open data policies is a method of citizen engagement that we have been promoting and would like to see applied more.

Here’s how other cities can learn from Buffalo’s example.

In recent years, Buffalo has been transitioning towards more data-driven decision making and collaborative projects with community organizations to address some of the city’s problems, including projects like Operation Clean Sweeps. With this in mind, Buffalo sought Sunlight’s expertise to help them draft an open data policy, as enhanced transparency was seen as vehicle for better coordination between the city government and community stakeholders.

Over a period of a three of months, Buffalo reviewed existing policies from other cities, decided which elements from those approaches were likely to be a good fit for Buffalo, and then crafted a draft policy.

As they considered how to improve the policy and make it reflect the needs of future users, the city settled on seeking direct comments from citizens. Once the policy was posted online, a comment left by Prof. Monica Stephens, a geography professor from the University of Buffalo, led to an invitation for city staff to speak to Open Buffalo. Open Buffalo is a civic organization that advocates for equality and justice in Buffalo, with a particular emphasis on using innovative tools like open data to do so. Soon afterwards, more members of the community and outside experts contributed comments, including recommendations like integrating Buffalo’s open data portal with the public records system and adding the ability for the portal to host crowdsourced data from community groups. In later discussions, the city indicated that it would like to add features reflecting both of these recommendations in the future.

We also helped the city think through ways to improve the policy through public engagement. Specifically, Sunlight offered the city a questionnaire on reaching a target audience when seeking feedback. This helped the city conduct targeted outreach around the policy, finding potential users of the portal and generating demand for their open data. The city also decided to hold public consultation for a few weeks to solicit the view of outside stakeholders.

One aspect of making this approach effective, however, was not digital at all. By following up with Dr. Stephens and Open Buffalo, the city catalyzed the potential interest in the policy through personal interaction. The quality of the twenty two comments the draft policy received both rewarded that approach and connected the city to potential users of the portal and the data on it. 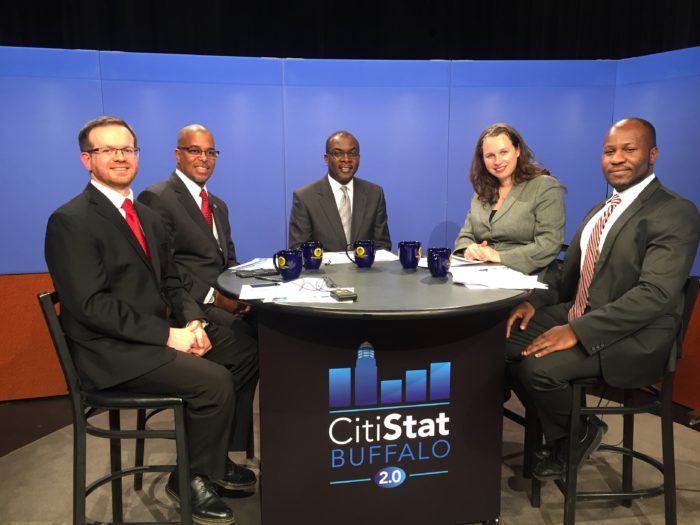 Over the course of the panel, we worked through:

We enjoyed a lively discussion on all these topics, as participants weighed how to balance the ambitions present in the comments with concerns about data quality or risks to privacy. You can watch the discussion in the archived video embedded below:

Buffalo is already embarking on using the comments to shape their open data program and the experience of other What Works Cities to guide their public communications. For instance, when if Buffalo decides to highlight how outside organizations have used the city’s data on the their portal, they can look to Louisville, which has an gallery of applications that use city data.

By taking this feedback and acting on it, Buffalo can focus on developing an open data platform that is dynamic and responsive to the needs of its residents.

This exercise in collaborative policymaking by Buffalo realized the potential of publicly drafting policy and demonstrated that drafting in the open, online, can work.

If the city did not post the policy online, it wouldn’t have leveraged the enthusiasm and expertise that was present in the community. Buffalo would have also missed the chance to establish new relationships with residents and civic groups, developing a user base for the portal when the city begins publishing open data.

When done correctly — with proactive outreach, facilitating dialogue and following up – drafting in the open can become an useful tool in policymaking. For Buffalo, there were distinct benefits from this approach. The most prominent being the policy will have already have dramatic improvements before it is enacted, instead of having to wait till a problem or dissatisfaction appears.

The city was also able to promote its open data programs in an efficient way. By engaging in public outreach, Buffalo built credibility for the program and shaped expectations that reflect the city’s capacity and timelines.

An under appreciated benefit of collaborative policymaking lies in its potential to find partners like Dr. Stephens. After making contact, the city found out about open data projects she was working on and established a new avenue for collaboration with the professor and her academic institution. By using the drafting process as an opportunity for public engagement the city is also developing a community of practice, which it can turn to when it engages in special projects around open data.

Mayor Brown and his staff shared useful guidance of what other cities can do to maximize the opportunity that collaborative policymaking represents. They recommend:

Co-creating a new open data policy like this is a victory for the City of Buffalo. This level of engagement by the city makes it a national leader in civic engagement around regulatory processes. If more cities embrace collaborative policymaking in their open data policies, they can also achieve the benefit of a more robust, user centered open data program.

This process can be replicated not just for an open data policy but for other types of legislation or initiatives. The comment process for federal regulations, reflects that this approach of engaging stakeholders is present at other levels of government . In the context of local government, an open data policy was a great place to start, due to inherent nature of transparency that is present in open data and the emphasis of using technology to facilitate that.

We look forward to seeing how Buffalo’s open data program develops, particularly in how open data is used by local stakeholders. With the collaborative approach that it used to draft the policy, the city is off to a great start in engaging the public via open data.