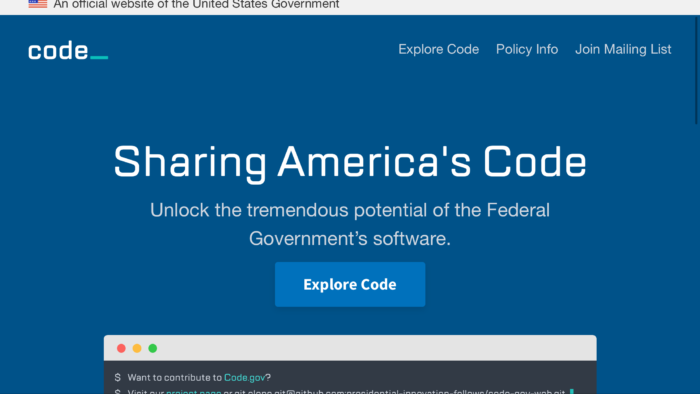 While threats to open government proliferate in the Trump administration, we’re glad to share news that sharing America’s code at code.gov endures.

In April 2016, Sunlight was strongly supportive of the United States government moving towards open source software.

As Nicole C. Engard reports at OpenSource.com, the “Federal Source Code Policy, released in August 2016, was the first U.S. government policy to support open source across the government.”

The policy established Code.gov, the nation’s website for using and improving government software, and a policy for sharing and reuse across government and with the public.

On May 11, Alvand Salehi, a senior technology advisor in the Office of the Federal Chief Information Officer at The White House, updated the attendees of the OSCON 2017 conference that the initiative, telling them that “Code.gov is here to stay.” You can watch Salehi’s talk on YouTube or below, courtesy of O’Reilly Media.

They’re also releasing code: you can check out the repository for newly released software developed to support a U.S. Department of Defense (DoD) mission to Afghanistan, ANET, here.

Salehi told OSCON that the new administration is supportive of the initiative because of its potential to save the federal government millions of dollars through reducing duplicative, wasteful spending. We expect that to be the case but hope that the White House Office of Management and Budget track and quantify savings and improvements to efficiency.

We also hope that the public helps improve open government code, demonstrating that improving the commons can be distributed, democratic and drive positive change for the public outside of partisan politics.