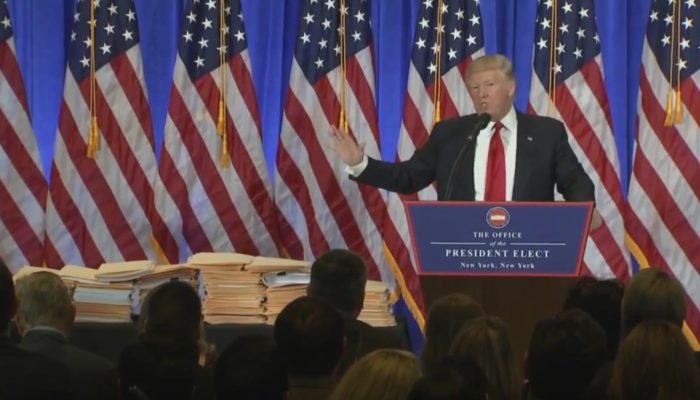 In November 2016, Sunlight began tracking President Donald J. Trump’s conflicts of interest. In May 2017, we relaunched our list as a spreadsheet, expanding from dozens to hundreds of entities. In July 2017, we  incorporated the president’s financial disclosure to the Office of Government Ethics. You can read about how we’re tracking the conflicts on the blog.

What we have called for in response to our findings has remained the same since November: for Trump to embrace transparency and disclose his tax returns, divest from his businesses, and use a blind trust with an independent overseer. The president has not done any of this, bringing unprecedented conflicts of interest into the White House and saddling his administration and American foreign policy with the appearance of corruption and unseemly monetization of the presidency.

Today, we’re proud to announce a $125,000 grant from the Lodestar Foundation to sustain and extend our list of Trump’s conflicts of interest, collaborate with other organizations investigating them, and assign and publish journalism based upon the research. The funding from Lodestar arrived in the form of a check from Samuel S. Levine, which we are disclosing today and will post on our funding page, in line with our longstanding policy of transparency.

Unlike the Trump administration’s approach to governance, happens next is no secret. Earlier this summer, we told you what we planned to do next on this project. Here’s the plan now:

We hope that the American people and our representatives in Congress work together in the years ahead to restore ethics and integrity to the highest executive office of government  in the United States.