As President Donald J. Trump enters the ninth month of his presidency, questions endure about the degree to which he’s subject to conflict of interest regulations. He is being sued by multiple parties who allege he’s violating a Constitutional clause that is specifically meant to prevent foreign governments from influencing U.S. presidents.

Since we began tracking the Trump family’s conflicts of interest in November after last year’s historic election, our list has significantly grown in scale and specificity as additional disclosures and reporting has brought more information to light. Our modest list of dozens of conflicts expanded to hundreds, and now has nearly doubled after the inclusion of the financial interests claimed by his daughter Ivanka Trump and her husband, Jared Kushner, both of whom serve as special advisers to Pres. Trump.

While Ivanka Trump is serving an unpaid role in the White House, in which she’s reportedly focused on women’s entrepreneurship and economic issues, she’s still subject to federal ethics laws. So is Kushner. His work as special adviser to the president entails a strikingly varied list of responsibilities, including Middle East peace negotiations, diplomacy with Mexico and China, responding to America’s opioid crisis, reforming the criminal justice system, veterans’ health care and government efficiency. 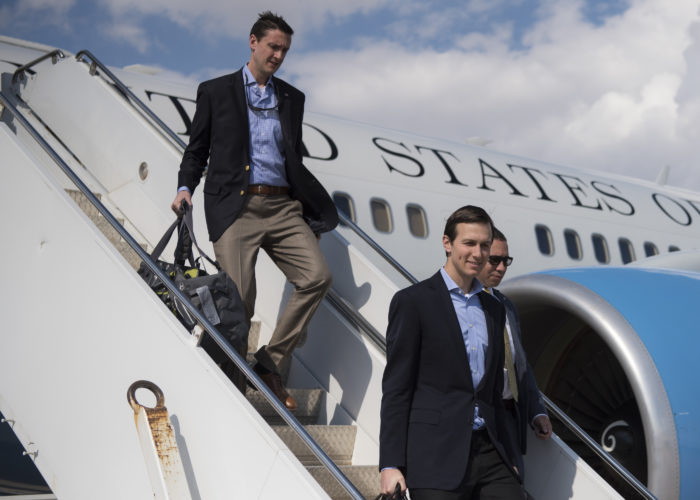 The couple’s combined international portfolio touches real estate, retail, technology, healthcare and much more. With that portfolio come many financial entanglements, which we have examined and published as structured data this week. In all, the financial disclosures and news reports we have investigated and confirmed reveal at least 1144 active conflict of interest concerns for the First Family. You can browse our spreadsheet directly online, explore the embed below, or download this latest iteration of the data as a .CSV, as of today. (President Donald J. Trump and FLOTUS / Trump FamilyTracking Trump’s Conflicts of Interest – Donald Trump Jr., Eric Trump, Ivanka Trump & Jared Kushner), as you wish.

That number reflects distinct business entities with which each family member retains financial ties — whether through equity, investment, debt or other arrangements. Many of those entities are closely related. For example, a corporation and a managing partnership that handle different roles for the same real estate development. The number also may represent some overlapping conflicts of interest. For example, assets disclosed by both Ivanka Trump and Kushner may be held jointly. However, if each person’s interest in a business is counted as one conflict of interest, the total volume reaches 1144. 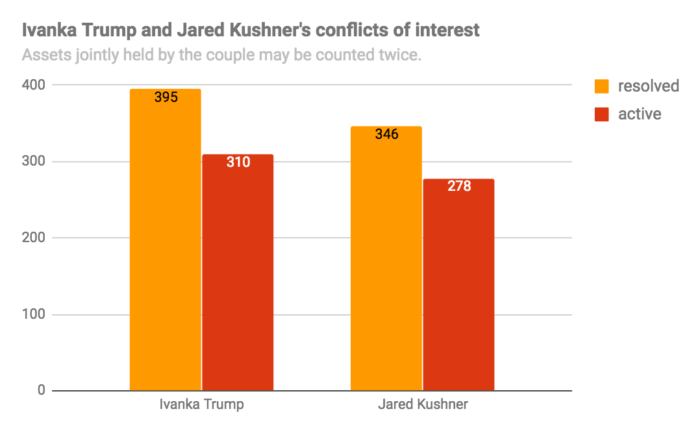 This includes 310 active conflicts of interest for Ivanka Trump and 278 for Kushner. The Sunlight Foundation previously identified 547 active conflicts related to Pres. Trump himself, and dozens more for other family members.

But all these numbers may rise still further as we continue to report out this project — particularly with records of Kushner. He has reportedly divested some of his assets to his own family members, rather than through arm’s-length transactions. Our list currently gives both Ivanka Trump and Kushner the benefit of the doubt in this regard. Unless a family member or close tie is documented, their divestments are assumed to have resolved any potential conflicts. As we work to verify the nature of each divestment, however, the status of some of their records may switch from “resolved” to “active.”

Of 346 “resolved” conflicts of interest for Kushner and 395 for Ivanka Trump, nearly all must be further researched in order to fully understand the nature of their divestments and to verify the completeness and accuracy of their disclosures. Kushner’s financial disclosure, in particular, was revised many times before its current iteration, which notes 74 assets that had previously been omitted, mainly due to bundled business structures that masked the names of businesses held by a parent company.

Such details matter in financial disclosures, which are designed to identify potential conflicts of interest to prevent improper activity.

Why do conflicts of interest in the First Family matter?

Sunlight’s focus on conflicts of interests in the Trump administration stems from the same principle that applies to every level of government: Conflicts of interest are red flags for possible corruption, or the use of a public office for private benefit. Ethics laws mandate disclosure and divestment to avoid even the appearance of elected officials and servants abusing their positions of authority, access and influence to further their own interests over the public’s interest. Billionaire Carl Icahn’s work as an unpaid special advisor to the president, while he remained invested in companies that would benefit from actions in that role, is a canonical example of this in the Trump administration.

The federal Office of Government Ethics, whose mission is to prevent and resolve conflicts of interest in the executive branch, has pointed out that criminal charges can be brought against federal employees who do not recuse themselves from government business that could affect their own interests. OGE, however, does not have the power to enforce the law, only to offer guidance and highlight issues. It falls to Congress and agency inspectors general to perform oversight of ethical failings and to take action.

As we announced in August, the Sunlight Foundation is now expanding our project to spotlight all of President Trump’s personal and familial conflicts of interest with additional funding from the Lodestar Foundation.

If you see conflicts that are not here and merit public scrutiny, please tell us so that we can tell others. Our work is and will always be freely accessible to the public under the Creative Commons license that we use everywhere. We invite you to peruse, scrutinize, and help us add to what we find. In exchange, we ask only that you share with us how you put it to use.

As we continue to build out this project, we want to know what additions you would find most useful and how you’d like to interact with the database. Please email us to share your thoughts, make a request or find out more about how you can get involved.