Two weeks ago, my colleague Noel Isama and I attended CityCamp NC, an unconference that that brought together people from the “government, business, neighborhood, non-profit, and academic communities to work toward next generation solutions for local municipalities” in Raleigh, North Carolina.

Every day, I work with Sunlight’s Open Cities team to make government data more open and available as part of our support of the What Works Cities initiative. The perspective I’ve brought to this work is not that of a former data scientist or analyst, though, unlike some our partners and allies. That certainly made the job more intimidating at first, but the different background I bring to the work has ultimately helped my thinking and approach to open data.

During my time as Director of Planning and Economic Development in the small, fiscally distressed City of Central Falls, Rhode Island, I received a crash course on how to meet community needs in simple, efficient ways (read: without much budget) through participatory approaches to city planning. The lessons I learned about how participatory practice can yield results inform my work on open data today.

I talked about these ideas during my keynote presentation at CityCamp NC. Below, you can read a short summary of my talk, view my slides and watch the archived video.

I started off my talk at CityCampNC by discussing two problematic themes I noticed in my time as a city planner.

The first was that city staff often made decisions about projects without input from the community. Inevitably, these projects did not work well for the residents they were intended for. 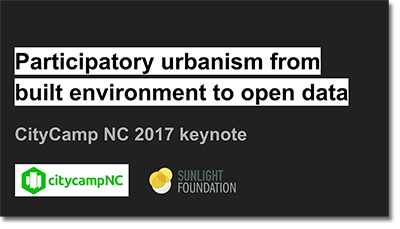 The second problem was a long inventory of big plans which were sitting on a shelf collecting dust. They were full of great ideas but required budgets that we simply did not have. They were doing nothing to help the city where it was.

These were clear pitfalls. So, as I continued my work, I made sure to collaborate with residents at every opportunity possible to ensure that our efforts were meeting real community needs, not imagined ones. And while we continued to apply for grants and budget that might fund our long term projects, I began looking for things we could do in the short term with the resources we had.

When Jenks Park had a litter problem, we hosted a community charrette with local artists and residents, where we co-designed the friendliest pair of garbage and recycling cans a children’s playground has ever seen. And while we made long-term plans for a multi-year, multimillion-dollar renovation of an underutilized mill building on the Blackstone River known as Central Falls Landing, we did the incremental action of partnering with a local restaurateur to create a pop-up cafe which made use of the riverfront space.

All of these projects and others like them involve collaborating with neighborhood residents and experimenting together on short term projects. This approach helped us make tangible progress toward long term goals, while also testing and informing those long term goals. These two characteristics became core to my understanding of participatory city-making.

Throughout these collaborations, people were asking me for information on things like local ordinances and zoning details. Because I was a department of one and didn’t have time to answer the same question over and over again, I began making this information available online. I didn’t realize it at the time, but this was my entry into open data.

I eventually got more and more interested in this component of my work, and in 2015 shifted to working on open data full time at Sunlight.

When I did, I was surprised to see some of the same problems in the municipal open data field that I had seen in Central Falls in the context of city planning. Too often, city data programs are run by IT departments who, understandably, are focused on the technical components of data publishing — and less on making the connections with community actors that are crucial to help solve human-centered problems. Open data programs also tended to focus on big-budget, long-term efforts, like comprehensive inventories and Web platforms. Those are both good ideas — but there are a lot things cities can do to meet community needs in faster, more directly useful ways.

My full talk from CityCampNC is available in the video above. Thank you to Jason Hibbets and the full CityCamp NC planning committee for inviting me to be part of this thought-provoking event, to everyone I spoke with in Raleigh, in the Research Triangle, and to the broader community of people who are working on these important issues.