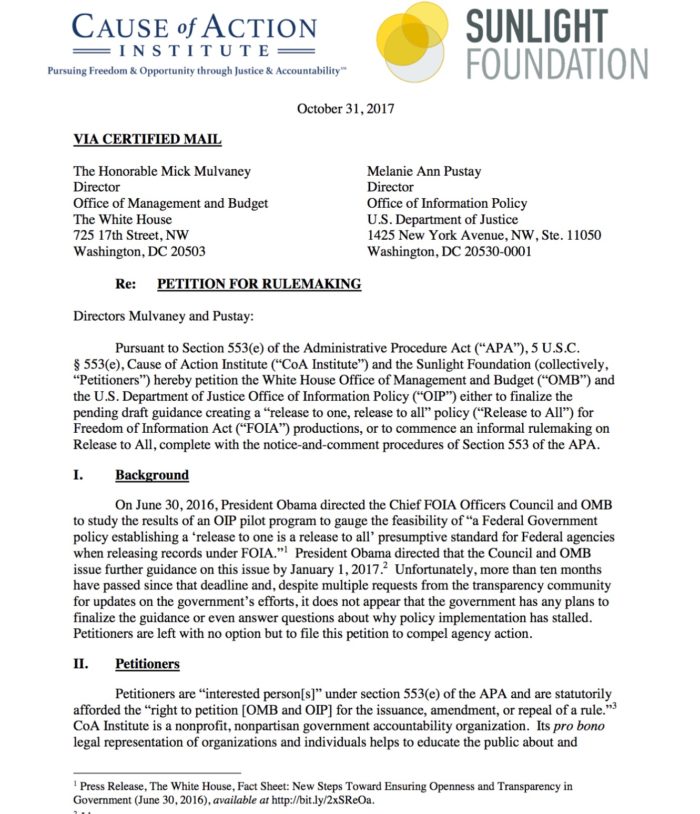 The Sunlight Foundation responded in good faith to the Justice Department’s request for public comment on a proposed policy in December 2016, holding that a ‘release-to-one, release-to-all’ policy for agency disclosures responsive to the Freedom of Information Act would be in the public interest. In the months since, the Department’s Office of Information Policy (OIP) has provided no information to us or the public about the status of that policy or a timeline for when it would be published.

Despite multiple requests for updates from the Justice Department over the past year, it does not appear the Trump administration has any plans to finalize and promulgate this policy, or even answer basic questions about why it has stalled.

Ten months of ambiguity, opacity, and deflection from the Justice Department and this White House have left us with little hope of a response.

As a result, this morning, the Sunlight Foundation, Cause of Action Institute​, and our open government allies wrote a letter asking The United States Department of Justice​ and the The White House​ Office of Management and Budget (OMB) to finalize and publish a new Freedom of Information Act policy that makes “release-to-one, release-to-all” the official stance of the United States government.

In addition, we joined the Cause of Action Institute in a petition to OMB and OIP either to finalize the pending draft guidance creating a “release to one, release to all” policy or to commence an informal rulemaking, complete with the notice–and–comment procedures of Section 553 of the Administrative Procedure Act.

Our petition compels the Trump administration to either move forward with disclosure and implementation, or explain why they don’t believe the  policy is workable.

A ‘Release to One, Release to All’ policy for the Freedom of Information Act has broad support within the transparency community. We and the American deserve an explanation as to why progress has ground to a halt after months of analysis, planning and responsive feedback to a request for public comment.