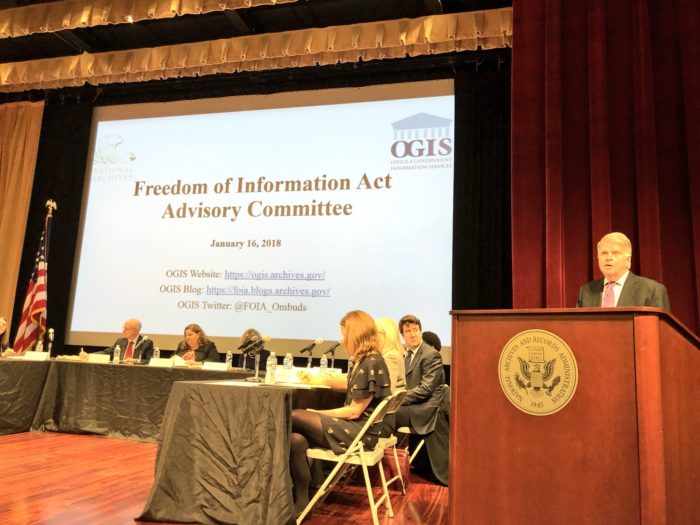 (Image: David Ferriero, Archivist of the United States, invites the public to visit the National Archives during Sunshine Week on March 12, 2018.

On January 16, the United States Freedom of Act Advisory Committee debated whether the phone numbers and email addresses of lower-level officials charged with administering the Freedom of Information Act (FOIA) should be proactively disclosed online.

While that decision was tabled until a later time, the twenty-person committee voted unanimously to approve the other recommendations to improve implementation of the FOIA in the federal government that subcommittees had formed over 2017.

The goal of this committee, which was established by National Archives and Records Administration (NARA) in 2014, is “to foster dialog between the Administration and the requester community, solicit public comments, and develop consensus recommendations for improving FOIA administration and proactive disclosures.” The law is playing a crucial role during the Trump administration, holding agencies and officials accountable for ethics, influence, and spending.

David Ferriero, the tenth Archivist of the United States, opened the public meeting by thanking the committee members for generously lending their time and expertise to this effort, and charged the committee with looking broadly at the challenges agencies face as the volume of electronic records increase. The meeting was broadcast online on YouTube. The archived video is embedded below.

The public can access all of the approved proposals on the National Archives website, including recommendations for proactive disclosure of categories of records, criteria to consider, publication of FOIA logs, document accessibility under Section 508, search, and efficiencies and resources. As in past years, federal agencies are not bound or required to adhere to the recommendations this committee produces.

A new FOIA.gov is coming soon, but a new FOIA policy remains under review

Later in the day, Melanie Pustay, director of the Department of Justice Office of Information Policy, anticipated a question regarding a “release to one, release to all” FOIA policy, stating that she not have a substantive update to give the public at this point, but it “remains under review.” President Barack Obama ordered the DoJ to publish a year ago, on January 1, 2017. Cause of Action and Sunlight have petitioned the agency to release the FOIA policy or begin a formal rulemaking.

In a “bonus update,” Pustay said that the Department of Justice is “really getting close to being able to go live with [their] first iteration” of a new national FOIA website that Congress directed the agency to build, when it passes the final stages of testing. 18F built a new FOIA.gov in 2017, with Sunlight’s input.

Separately, the federal FOIA ombudsman, the Office of Government Information Services, disclosed that they were working with the U.S. General Services Administration to improve FOIA software and would be creating a webpage with recommended contractors to do so.

Silence in the face of criticism of FOIA

Near the end of the meeting, Nate Jones, director of the FOIA Project at the National Security Archive expressed frustration when asked by Sunlight’s deputy director about silence from the National Archives and the Office of Information Policy regarding recent public reports of FOIA that have painted the people who fulfil requests or the activity in negative light.

“It made me really angry,” said Jones. “I really would’ve liked to see the FOIA Ombuds office or the Department of Justice go on the record, or write an op-ed, or speak more forcefully, saying FOIA professionals are government treasures.”