This week, a look at which businesses pay rent to the President of the United States – despite, in some cases being federal contractors – the Trump Organization revives a project in the Dominican Republic, the railroad safety chief resigns amid allegations of moonlighting, and a nomination for a new federal ethics chief.

For the first time, we are getting a glimpse into how much money President Donald J. Trump receives in rental payments from his tenants. It’s all thanks to “Landlord-In-Chief,” an investigation produced by Dan Alexander and Matt Drange at Forbes.

The more than 150 tenants the reporters identified range from foreign governments to banks to Starbucks and Nike. In total, Forbes was able to find $175 million a year in rental payments to Trump (this does not include any businesses with offices in Trump buildings who are subleasing rather than renting directly from the Trump Organization.)

To put the list of tenants together, the Forbes team used public records, debt disclosures and interviews. They found some of the tenants (including Duane Reade, Nike, Bank of America and Axa) lobbied the government last year while others (including Columbia University, Starbucks, IBISWorld and Verizon) were paying rent to Trump last year while they were federal contractors.

For more on what Forbes found, including if rental payments played a part in the Walgreens and RiteAid merger, watch the video below, read their story and the embedded tweets below, and look through the data yourself.

(1/14) Government ethics officials, charged with detecting conflicts of interest, have never seen the president’s rent roll. So we created one of our own. Let’s take a tour through Trumpland, to find out who is paying the president. All figures are estimates.

The story was highlighted in this week’s “Trump, Inc.” podcast, a new weekly audio project from ProPublica and WNYC Studios that will attempt to untangle and explain Trump’s business interests. 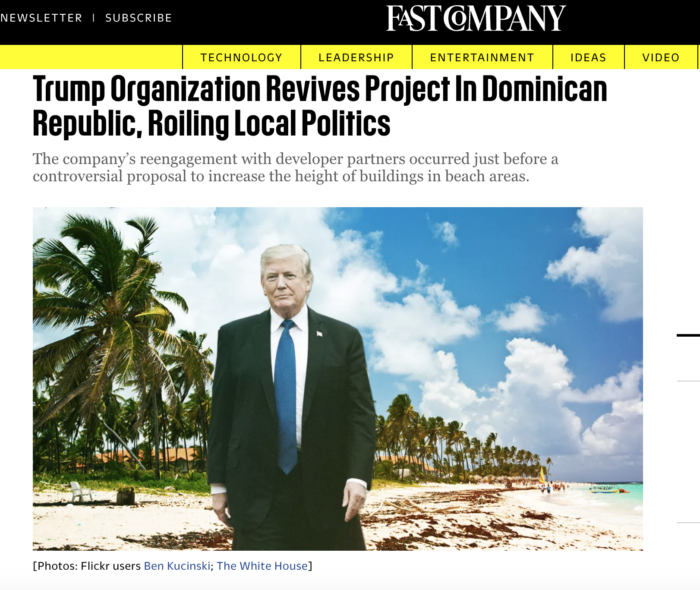 Trump has promised not to pursue any new overseas business deals while in office but, as Fast Company reported, “the Trump Organization is close to an agreement in the Dominican Republic with a developer to partner on a project on the east coast of the island.”

The project is a partnership between the Trump Organization and a local island developer, Cap Cana Group. According to Fast Company, the Cap Cana Group, was given permission to build 17 towers, which would increase the height restrictions of buildings along the coast, something that is causing controversy locally.

Trump attorneys say the project is not new and is part of a deal signed more than ten years ago, in 2007.

In a followup article covering Fast Company’s report, Newsweek quoted experts – including Sunlight Foundation’s Alex Howard – that said Trump’s involvement in the project violates the emoluments clause of the Constitution and is a breach of public trust.

“With any of the ongoing business dealings that exist in at least 19 different countries around the world, any of these represent a potential point of leverage, a point where the president himself could have reason to make decisions that would put his private interests above the nation’s,” Howard told Newsweek.

“The recourse for this is for Congress to act. If the president is receiving emoluments, it is appropriate to consider impeachment. That’s the recourse that the drafters of the Constitution have offered.”

As Cristina Maza reported, “Trump is the only modern president who has both refused to release his taxes to the public and divest his private businesses while in office.” 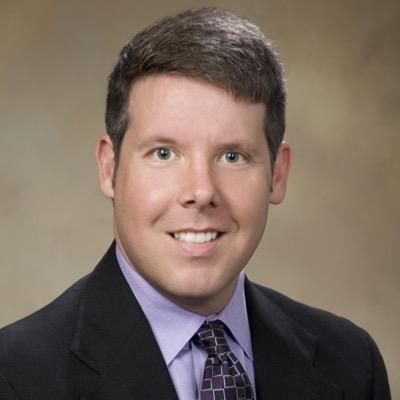 The acting chief of the Federal Railroad Administration resigned after Politico raised questions about him continuing to work as a public relations consultant in Mississippi.

Hall was on an extended leave of absence January, due to a family emergency, but now his departure is permanent, according to the Federal Railroad Administration (FRA). In a federal ethics filing, Hall said his PR business would be “dormant” while he worked at the FRA.

His resignation leaves the FRA without a permanent, Senate-confirmed director as it investigates four fatal Amtrak crashes since December 2017 and the highest annual number of railroad deaths in a decade over the past year, according to FRA data.

On February 8, President Trump nominated Emory A. Rounds III to lead the U.S. Office of Government Ethics. Watchdogs and former federal ethics officials praised highly of Rounds and his abilities, including Walt Shaub, who has been a pointed critic of Trump’s ethical failings.

“I can’t imagine any White House ever being able to pressure him into doing anything that he did not think was legal, appropriate or in the best interests of the country,” Don Fox, a former acting director of OGE, told NPR.

Rounds, an associate counsel at OGE, has worked in the ethics office of the Commerce Department and the Navy’s JAG Corps. Trump is nominating him for a five-year term that would need to be approved by the Senate.

As Sunlight noted, Rounds will face a challenging context, should he be confirmed: “When a president is neither transparent nor holds himself accountable to federal ethics law, the Office of Government Ethics can only warn of the dangers that poses to the union, not defend against them.”

Sunlight’s “Tracking Trump’s Conflicts of Interest” presents a comprehensive, free, searchable database detailing all of President Donald J.Trump’s known business dealings and personal interests that may conflict with his public duties as president of the United States. Read our reporting to stay current on related news, learn more about conflicts of interest at every level of government and search our database. If you’re familiar with any of the conflicts we’re tracking, please email us. If you’d like to contribute to the project, please contact us.