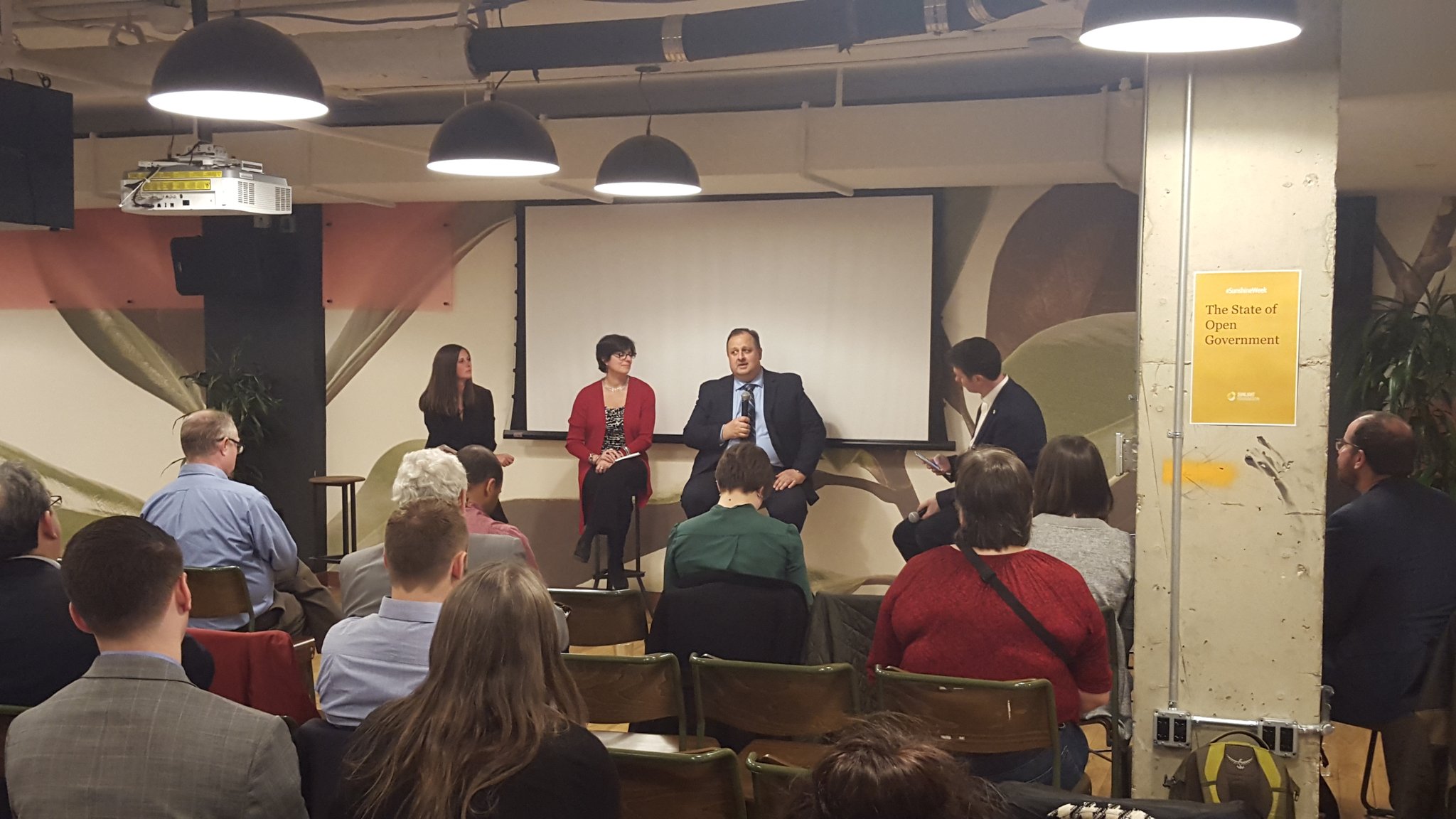 Washington, DC is a study in contrasts in open government. As a city, the District of Columbia is taking more steps toward data transparency although the future of its Office of Open Government remains unclear. At the same time, the Trump administration has set a new low bar for transparency, accountability, and ethics. Last night, our event in honor of Sunshine Week 2018 captured the state of open government in Washington, DC both as a city and as the home of the federal government. If you weren’t able to join us last night, here’s a short recap of the talks and panel conversations, followed by a video of the entire event.

Why transparency matters in 2018

Sunlight’s deputy director Alex Howard started off the night and brought everyone together around the idea that transparent, accountable government matters — particularly today.

Walking through transparency, news, and public trust like nobody else, @digiphile pic.twitter.com/exO2ftjj5Q

"If it's made by the government of the people, it should be accessible to the people." — @digiphile #sunshineweek

One of the reasons why transparency matters today more than ever is that in many places around the globe, government corruption is severely destabilizing. Sunlight executive director John Wonderlich set the evening’s conversation within a broader context of transparent government as a worldwide goal.

And we’re live, talking about the state of open government in the USA! @johnwonderlich is opening up the event, fittingly, looking back and ahead. Livestream: https://t.co/Oy9MfeJOBR #sunshineweek #foia If you have questions, tweet them at @digiphile pic.twitter.com/GEBlLkhc5x

Listening to @JohnWonderlich at the Sunlight Foundation event on government transparency during Sunshine Week. Preach it! pic.twitter.com/BlRczipzy0

Staff from Sunlight’s newest program, the Web Integrity Project, provided an overview of their work tracking changes to federal websites and the role of the web in today’s federal democracy.

The new @SunFoundation Web Integrity Team led by @tolyrinberg is working to track every change (and removal of information on US gov websites. They haven’t seen much open data taken down, but are seeing entire webpages and resources removed including climate change sites. pic.twitter.com/vHNnOiJpPp

Then Sunlight’s Open Cities director Stephen Larrick hosted the first panel of the evening about open data in the District of Columbia. Making data open is a way for residents to get involved in government, he explained. Joining him to discuss this was Julie Kanzler from the DC Office of the Chief Technology Officer, Peter Tatian of the Urban Institute, and Kate Rabinowitz of DataLensDC.

"Data is about relationships. It's about an ecosystem of people using information together." — @SLarrick #SunshineWeek

"Cities are uniquely positioned to demonstrate the possible of a democracy that is more open, transparent, and participatory" -Stephen Larrick, Open Cities Director for @SunFoundation. #OpenGov #OGPLocal pic.twitter.com/jzBDr2yWmG

These amazing folks represent the supply AND demand of @opendatadc! We need both sides engaged to support healthy #OpenGov. @SunlightCities pic.twitter.com/4aPL0XoKc8

What data are missing in your city? @PeterTatian notes that we have little basis on how to evaluate changes in rent control policies in DC because the records are still paper. #SunshineWeek

The panelists discussed ways that city governments can improve their delivery of services:

No more data dumps! Govt data should be one-stop, accessible, user-friendly, documented, downloadable– or else it's useless to the people who may need it most https://t.co/1YMhQ79Iq6

Panelist Peter Tatian underscored why it is important to not just publish data but help community members use it. Sunlight Open Cities’ Tactical Data Engagement approach is designed to do just that.

"We were talking about school data, and one parent said, 'Well that's really great for the parents who have the time and the expertise to analyze this. But you're just making things more unequal by not helping people without those skills.'" — @PeterTatian #sunshineweek

This might be my favorite #OpenGov #OpenData panel of all time. Local gov, engaged citizens, civic tech, research. #sunshineweek https://t.co/HEKrUa1kOY

We were proud to welcome the Open Government Partnership as a special guest to share their work on the Independent Reporting Mechanism for open government action plans.

.@OGP_IRM calls out to all stakeholders to make more ambitious commitments so they translate into transformative reforms when implemented. You can learn more in the newly released report: "When More is More: Ambition in #OpenGov Action Plans." pic.twitter.com/x5VIDApiBh

Transparency at the federal level

Then to talk about transparency and accountability issues in the federal government, Alex Howard moderated a panel with Cori Zarek, President of the DC Open Government Coalition, Mozilla Fellow, and former Deputy U.S. Chief Technology Officer; Danielle Brian, Executive Director at the Project On Government Oversight; and Walter Shaub, head of the Ethics Practice at the Campaign Legal Center and former Director of the Office of Government Ethics.

At @SunFoundation's #SunshineWeek event: @waltshaub on the obfuscation of records that should be disclosed, like travel records, at agencies (HHS and others), that are now incredibly difficult to get through FOIA. "Journalists shouldn't have to stake out departing airplanes" pic.twitter.com/RykVbmfAha

You know it is a good story when @waltshaub gasps! #SunshineWeek

"Whistleblowers are an essential part of an early warning system… but what we have now is different" @POGOBlog's @daniellebrian on gag orders and the chilling effect at federal agencies #SunshineWeek pic.twitter.com/PWSnbIhQBa

At @SunFoundation's #SunshineWeek event: @waltshaub on the obfuscation of records that should be disclosed, like travel records, at agencies (HHS and others), that are now incredibly difficult to get through FOIA. "Journalists shouldn't have to stake out departing airplanes" pic.twitter.com/RykVbmfAha

Many thanks to everyone who came to our #sunshineweek event tonight, our speakers, and all the Sunlighters who helped make it happen behind the scenes. Video is on our Facebook page.
Keep fighting for freedom of information! Open government is good government! pic.twitter.com/iBGr6lHdYJ

Want even more? You can watch the recorded livestream of the full event here:

Sunshine Week 2018 is coming to a close, but our work fighting for transparent, accountable government that includes everyone is not. Support our work in the year ahead by making a donation to the Sunlight Foundation today. We’ll see you at Sunshine Week next year, and in the work for transparency in the months ahead.