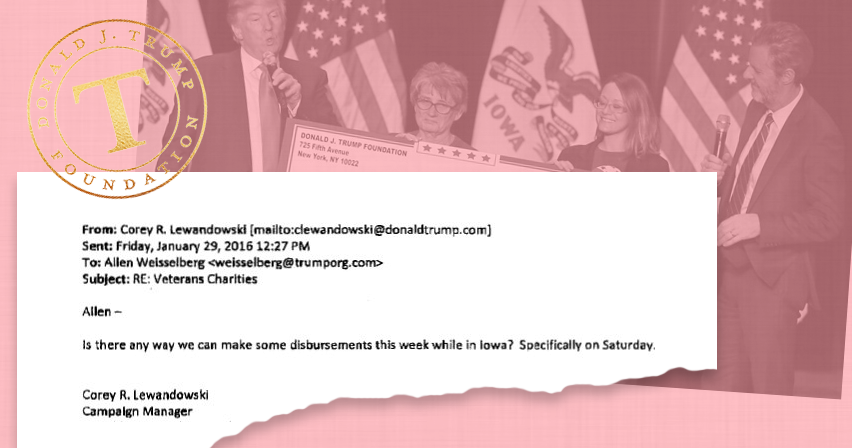 This week, the New York State Attorney General is suing the Trump Foundation, the latest on two emoluments lawsuits against President Donald Trump, and Ivanka Trump and Jared Kushner are making millions while working as “unpaid advisors”.

On Thursday the New York State attorney general’s office filed a lawsuit against the Donald J. Trump Foundation. The lawsuit is the result of a two year investigation into the charity, the New York Times reports.

According to the lawsuit, the nonprofit and the Trump family are accused of violating campaign finance laws and illegal coordination with President Trump’s presidential campaign. The lawsuit is asking for the foundation to be dissolved. In addition the New York attorney general says President Trump and three of his children—Donald Jr., Eric, and Ivanka—should be barred from serving on the boards of nonprofits based in or operating in New York state for one year.

The attorney general also sent referral letters to the Internal Revenue Service and the Federal Election Commission for possible further action, adding to Mr. Trump’s extensive legal problems. The lawsuit, filed in State Supreme Court in Manhattan, culminated a nearly two-year investigation of Mr. Trump’s charity, which became a subject of scrutiny during and after the 2016 presidential campaign.

According to the New York Times, “while such foundations are supposed to be devoted to charitable activities, the complaint asserts that Mr. Trump’s was often used to curry political favor or settle legal claims against his various businesses, and even spent $10,000 on a portrait of Mr. Trump that was hung at one of his golf clubs.”

After the 2016 election President Trump wanted to dissolve the Foundation but because it was under investigation by the New York State attorney general’s office it was not allowed to be dissolved. In addition to the lawsuit, the attorney general also sent referral letters to the IRS and the Federal Election Commission for possible further action.

A beach club, private villas, a hotel, condominiums and a world-class golf course. That was the promise when the Trump Organization was selling property for the Trump Farallon Estates at Cap Cana, a luxury development planned in the Dominican Republic.

Ninety-five percent of buildable lots were sold in the first day they went on sale, ABC News reports, but 10 years later, there are no condos, no beach club, and no golf course. ABC News tracked down close to 50 original property owners of the Trump-branded resort and they say they feel betrayed.

“Nothing was done and everything was lost,” Mariano Gonzalez, a Puerto Rican doctor who, along with two friends, invested $3 million for a piece of land in the planned development, told ABC News. “My main message is ‘Give me back my money.'”

The Trump Organization settled a lawsuit with the developer in 2012 and ultimately received $12 million in licensing fees, according to ABC News. Most of the property owners were left with nothing, having to foreclose on their property or continue to pay maintenance fees on dirt land plots.

Then, last year, in February, Eric Trump showed up in the Dominican Republic and announced a new phase for Trump Farallon Estates. A year later plans for the development have been kept hush-hush.

Senator Benjamin Cardin, (D-MD) a member of the Senate Foreign Relations Committee, told ABC News, “the American people are left questioning whether the President’s decisions abroad are made only in the U.S. national security interest or with regard to his business interests.”

Cardin is part of a lawsuit from hundreds of Democratic lawmakers against President Trump over violating the foreign emoluments clause of the U.S. Constitution. The clause prohibits public officials from receiving anything of value from foreign governments, including foreign government-owned businesses, without the approval of Congress.

The lawsuit from Senator Cardin and his fellow lawmakers is one of three emoluments clause claims making its way through the court system.

As CNN details, they are asking the court to say the president is violating the emoluments clause, forcing the president to seek Congress’ approval for new transactions. An attorney for the president said this can all be solved through politics.

“They can’t convince their colleagues to bring the matter to the floor,” the attorney argued.

There was no final decision in court Thursday about whether the case could move forward. Another emoluments case against President Trump was dismissed by a trial-level judge in New York, but is on appeal. The other case was brought by state attorneys general in Washington, D.C., and Maryland. They claim hotels and event space in their states have lost business to the Trump International Hotel in D.C.

That case was heard by U.S. District Court Judge Peter J. Messitte Monday. According to the New York Times, the judge “sharply criticized the Justice Department’s argument that President Trump’s financial interest in his company’s hotel in downtown Washington is constitutional.

Judge Messitte did not rule Monday, but promised to decide if the case could move forward by the end of July. If it does move forward the attorneys general for D.C. and Maryland would be able to ask to view financial records from the hotel and potential other evidence.

Ivanka and Jared earn millions while working as “unpaid advisors”

As unpaid advisors to President Trump, Ivanka Trump and Jared Kushner reported earning more than $80 million in outside income.

The amount could be much more though and is only an estimate. As CNN explains it’s “impossible to calculate precise totals of income and assets because the documents — which are used throughout government — ask officeholders to disclose figures in ranges, such as ‘$100,000 to $1,000,000.'”

For Ivanka part of that income comes from the Trump International Hotel in D.C. and severance from the Trump Organization, according to Bloomberg and financial reports. Kushner reported more than $5 million in profit from the sale of a shopping mall in the Bronx.

According to the recently filed disclosure, Kushner has divested himself from more than 125 assets. A spokesperson for the couple told news organizations they have not significantly increased their wealth over the past year.

The disclosures are once again raising concerns about conflicts of interest. Critics say it is unprecedented for relatives and top advisors of the president to also be making millions of dollars outside the office in private business dealings.