For the nearly 73.8 million Americans enrolled in Medicaid and the Children’s Health Insurance Program (CHIP), and others newly eligible for these services, it has recently become much more difficult to learn about the Affordable Care Act (ACA) on Medicaid.gov.

Early last month, a 14-page website dedicated to the ACA was removed from Medicaid.gov, the website for the Center for Medicaid and CHIP Services. While content from some of these pages is still live elsewhere on Medicaid.gov, most of the information, which remains accurate and relevant for Medicaid recipients, has been entirely removed. A prominent link and dropdown menu with the text “Affordable Care Act” has also been removed from Medicaid.gov’s top menu, indicating a shift in how information is now being presented on the website.

The changes, detailed in the latest Web Integrity Project report, occurred without advance notice by the Centers for Medicare and Medicaid Services (CMS), the agency that runs Medicaid and CHIP. 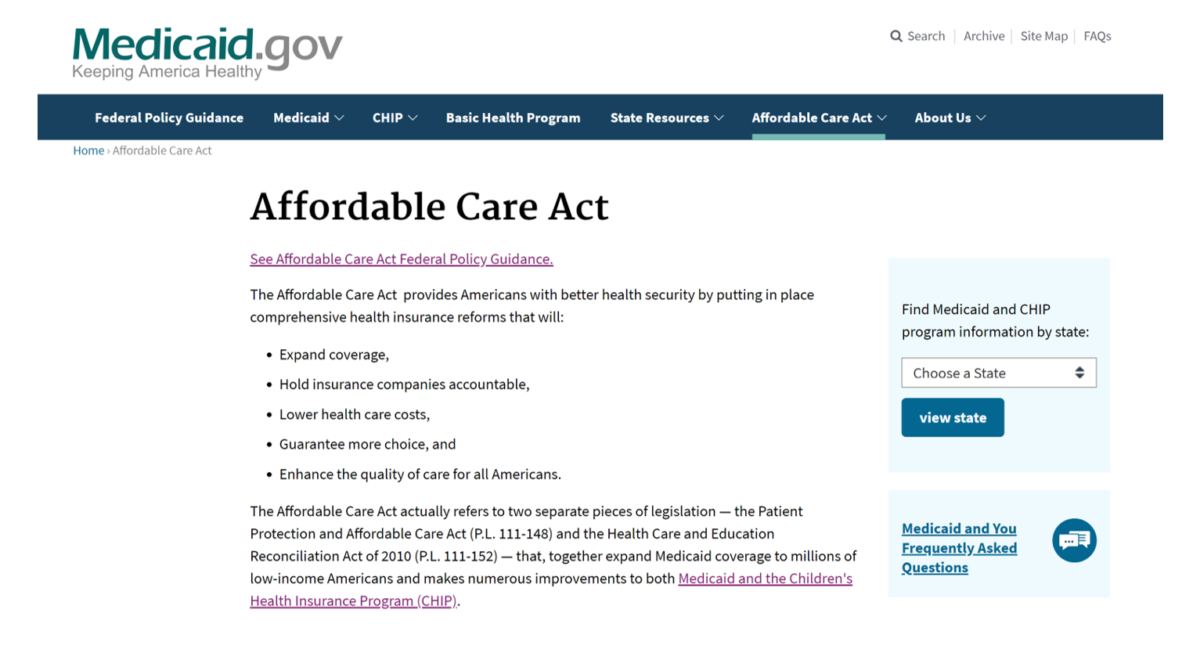 A snapshot of the top portion of Medicaid.gov’s removed “Affordable Care Act” page, as captured by the Internet Archive’s Wayback Machine on May 28, 2018.

The removed resources, which have been preserved by the Internet Archive’s Wayback Machine, provided information such as eligibility requirements under Medicaid and the ACA, relevant to individuals who may need to move between Medicaid coverage and health insurance plans provided through marketplaces established by the ACA, depending on changes in their income levels. Other Americans who are newly eligible for Medicaid through Medicaid expansion under the ACA could have used this information to understand how the ACA affects their Medicaid benefits and services they can receive. 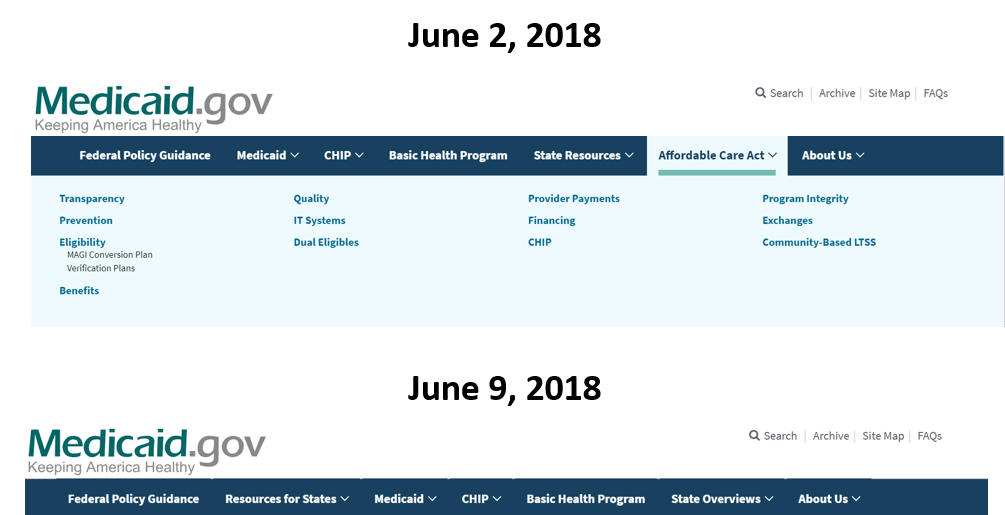 The “Affordable Care Act” dropdown menu was removed from Medicaid.gov between June 2 and June 9, 2018.

The URLs for six of the pages that have been removed redirect to the Medicaid.gov homepage or do not have a redirect established at all. For example, the “Coordination with Affordable Insurance Exchanges” page contained information about the coordinated system of applying for coverage under Medicaid, the Children’s Health Insurance Program, and the Health Insurance Marketplace; the “Provider Payments” page contained information about states reimbursing eligible physicians with increased payments for primary care services they provide through Medicaid.

The content of two pages from the removed website can be found almost entirely on other pages within Medicaid.gov. The URL for one of these pages, which was titled “Program Integrity,” now leads to a new page titled “Affordable Care Act Program Integrity Provisions,” which includes the same content about provisions under the Affordable Care Act designed to fight Medicaid provider fraud, waste, and abuse, as well as ensuring individuals with pending fraud investigations do not receive federal funding without good reason. On June 26, 2018, CMS announced in a press release that it was releasing “new and enhanced initiatives designed to improve Medicaid program integrity.”

What is the significance of content from the “Program Integrity” page being moved a new page, while content from other ACA-related pages has been completely removed? Without a public explanation of the removals by CMS, the answer is unclear.

A Pattern of ACA Removals Across CMS Websites

Medicaid.gov is not the first CMS website to remove information about the ACA without explanation. CMS also runs Medicare, and WIP previously documented a removal of the main ACA webpage from Medicare.gov.

Currently, after these removals, neither Medicaid.gov nor Medicare.gov contain a prominent section devoted to the ACA, suggesting a CMS-wide shift in priorities with regards to the ACA. While CMS.gov — which provides information about all centers within CMS — still has pages with some information about the ACA, the pages are scattered throughout the website rather than located in one accessible section.

As noted in WIP’s previous blog post, the uncertain future of the ACA makes these types of removals particularly confusing, and the agency has not proactively communicated whether the removed content remains accurate or not, sowing public confusion. In the case of the recent Medicaid.gov ACA-related removals, the website’s users are left to wonder, as WIP has described before: does this removal suggest that there is a new policy that has actually changed Medicaid benefits or coordination with the health insurance marketplaces?

The ACA is still law, and it will continue to impact both Medicaid and Medicare coverage and enrollees as long as it remains law. Medicaid.gov and Medicare.gov visitors should be able to access information about the effect of the ACA on their benefits, helping ensure their access to healthcare.