In these times of growing economic and political inequality, cities are often on the frontlines of dealing with the consequences of inequity. Issues such as housing affordability, health disparities, and economic exclusion have forced cities to become increasingly concerned with how they they are using their limited resources to foster equity. Cities need every tool in their toolbox to tackle these foundational issues, and because government is at its best when it is open, community engagement and open data might be amongst the most impactful tools a city has.

Since information is power and unequal distribution of power is at the heart of inequity, we advocate for cities to share it freely. People have a right to public information and can use facts as tools to affect change without having to pay or have special privileges for access. In open cities, government agencies both operate more efficiently and earn the trust of local residents.

Establishing an open data program defined and codified by a robust open data policy is one of the first and necessary steps cities can take towards doing that by providing information that can directly accessed online. But if open data is going to be a tool to address inequity, a program and portal are insufficient.

So what does using open data with a focus on equity look like, and what are ways some ways cities can be more transparent to improve equity in their communities? Our city partners are leading the way with innovative strategies to apply transparent practices and open data to make cities more equitable.

Cities in the US spend millions, if not billions of dollars in services and goods to function properly. With so much money being spent and opportunities for business with the city government, it’s easy to see how procurement could be used as a tool to address inequity.

Some cities have tried to capitalize on the opportunity by creating inclusion programs that incentivize hiring underrepresented groups and local businesses to fill City contracts. Yet procurement is frequently dogged by scandal and corruption, with established players benefiting from mastering complicated processes and having inside connections. The Sunlight Foundation and the Open Contracting Partnership are currently working with the Cities of Los Angeles and Philadelphia to center the needs of local businesses in determining what contracting data would be most impactful to collect and publish.

Both cities are motivated by the prospect that providing better access to city contracting data and other relevant information will enhance their inclusion efforts and level the playing field.

Here’s how open data plays a role: Since larger companies often have greater capacity to search and bid for opportunities with the City, resulting in an inherent disadvantage over smaller local businesses who may want to participate.The information asymmetry that exists for city procurement disproportionately impacts them, as they often lack the time or resources to navigate convoluted processes, and are thereby discouraged from pursuing contracts. Considering that many business owners from underrepresented backgrounds also struggle to navigate exclusionary social and economic systems, City procurement has become an imbalanced playing field.

The cities of Los Angeles and Philadelphia are innovating in this space by bringing in civil society groups like Sunlight and OCP to advise on how bringing local business owners opinions’ into decision-making about procurement reform and how opening contracting data might empower local businesses to compete for contracting opportunities. By providing equal access to information about City contracting, these cities are hoping to level in the playing field in way that not only helps achieve their procurement goals but fosters equity as well.

Standard for transparency in Fayetteville

We’ve noted before how responding to issues of equity can also be the catalyst for enhanced transparency at the local level. One area where this has occurred is in criminal justice and police reform. A issue that is greatly shaped by racial and class dynamics and where a city’s response to this is a direct reflection of its approach to equity, as closed government often served as a way to protect perpetrators of police malfeasance, while preventing those who sought reform from having the relevant information they needed to bring it about.  One place where transparency and in particular open data played a role in how a city shaped its policing was in Fayetteville, NC.

After several notorious incidents of police brutality were exposed on a national level, there was a renewed call for the publication of data and information related to policing. In response the City and its police department created Fayetteville’s open data portal to share police data with the community. This commitment to data transparency is in line with the Fayetteville police department’s emphasis on community policing and building trust with residents. Partnering with the Southern Coalition for Social Justice to administer the Open Data Policing site, the City of Fayetteville was able to start building relationships with local stakeholders and create a resource for public use in police oversight. 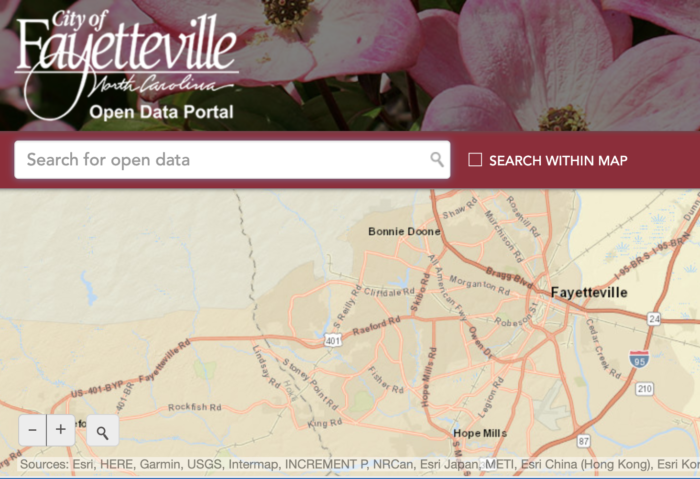 The success of this effort inspired the City to go further and prioritize community-centered open data through other streams of work. Through What Works Cities, Sunlight is currently providing technical assistance to Fayetteville to craft the policies that will govern how the City will administer its open data program, with resident input as a cornerstone. Sunlight is currently interviewing residents to get feedback for the policies to find out what their information needs are, so the City can establish a more resident-informed strategy  for the future of its open data portal.

Whether it be with contracting or policing, cities are like Los Angeles, Philadelphia, and Fayetteville realize that open data combined with a commitment to involve the community is critical tool in their pursuit of equity.

We would like to know how your city is using open data for equity, so that others can learn from you. Email us at opecities@sunlightfoundation.com with your stories.