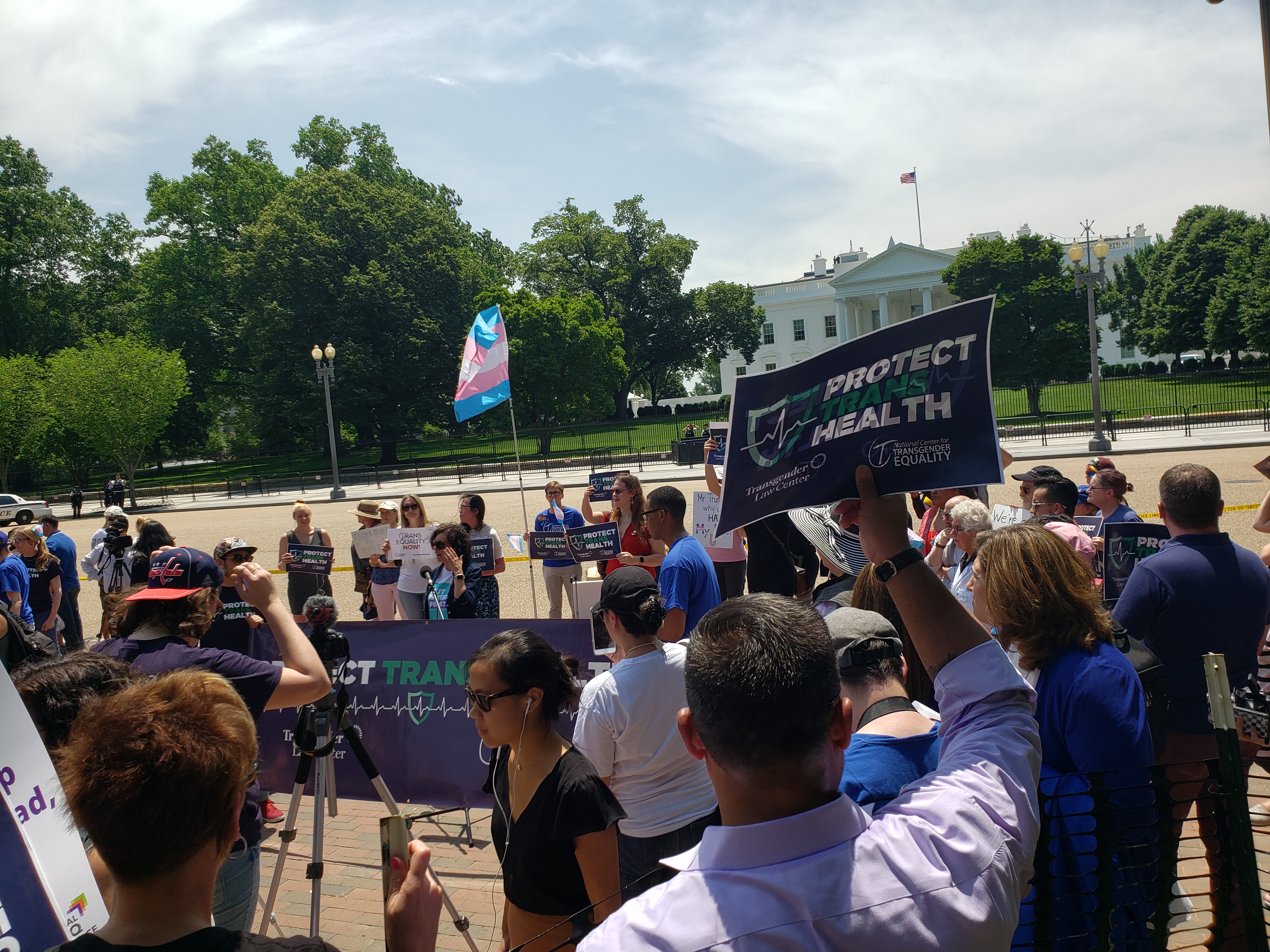 Kelli Garcia of the National Women’s Law Center, the group that initially identified the website changes related to Section 1557 on the HHS Office for Civil Rights website, speaks at a rally in support of trans health in front of the White House the week after the proposed rule was announced.

New regulations rolling back protections for transgender and gender nonconforming patients in healthcare settings, announced last Friday, appear to have been foreshadowed by changes documented by the Web Integrity Project last year. The new rules reinterpret Section 1557 of the Affordable Care Act to exclude “gender identity” as a prohibited basis for discrimination.

In the Spring of 2017, the Office for Civil Rights at the Department of Health and Human Services quietly changed information on its website related to Section 1557 and discrimination against transgender and gender nonconforming people in healthcare settings. Explicit references to “sex stereotyping” and “gender identity” were removed from a section detailing the types of discrimination the OCR was empowered to enforce, changes that seemed to exclude transgender and gender nonconforming people from protections, and alarmed some transgender rights advocates. Information about discrimination on the basis of “termination of pregnancy” was also removed.

At issue was whether Section 1557 of the Affordable Care Act, which prohibits discrimination based on sex, could be interpreted to also prohibit discrimination on the basis of gender identity and termination of pregnancy. The Obama administration had determined that the law did empower HHS to enforce prohibitions on such discrimination. But a federal court in Texas ruled against that view of the law, and issued a nationwide injunction prohibiting OCR from enforcing discrimination on the basis of gender identity. Some advocates suspected that the new Trump administration might seek to officially reinterpret Section 1557 to exclude transgender and gender non-conforming individuals from sex discrimination protections.

The OCR website changes were discovered by the National Women’s Law Center, and we subsequently documented them in detail in a report released in July of 2018. As we wrote back then, experts told us that more content about prohibitions on sex discrimination was removed than appeared necessary to reflect the injunction, and that the changes seemed like a preview of things to come. They were also part of a broader trend to sideline or deemphasize elements of the Affordable Care Act on federal websites, as we documented recently in an expansive trend report, Erasing the Affordable Care Act.

A side-by-side comparison of a portion of the June 29, 2017 and October 6, 2017 versions of the Office for Civil Rights “Section 1557: Protecting Individuals Against Sex Discrimination” page, one of several pages about Section 1557 changed in 2017, as captured by the Internet Archive’s Wayback Machine.

The administration framed the new rules as reflecting lawmakers’ intent when Section 1557 was first enacted.

“When Congress prohibited sex discrimination, it did so according to the plain meaning of the term, and we are making our regulations conform,” said OCR Director Roger Severino in a press release.

Last year, we documented another set of changes to OCR’s website and explained how they similarly appeared to foreshadow an attempt by HHS to redefine the understanding of sex and gender. OCR’s “Discrimination on the Basis of Sex” webpage was altered to remove the term “gender” from phrases referring to “discrimination on the basis of … sex (gender).” The changes preceded reporting that HHS had circulated a memo aiming to legally redefine gender as an immutable trait determined by one’s genitalia at birth.

With the proposal of the new rule, and as reflected in changes to text on the OCR website, “The current administration has rewritten large swaths of the implementing regulations of Section 1557 to limit the definition of discrimination, meaning women, LGBTQ people and limited English proficient individuals may again be shut out of vital health services and care because of biases against them,” said National Health Law Program Executive Director Elizabeth G. Taylor in a press release.