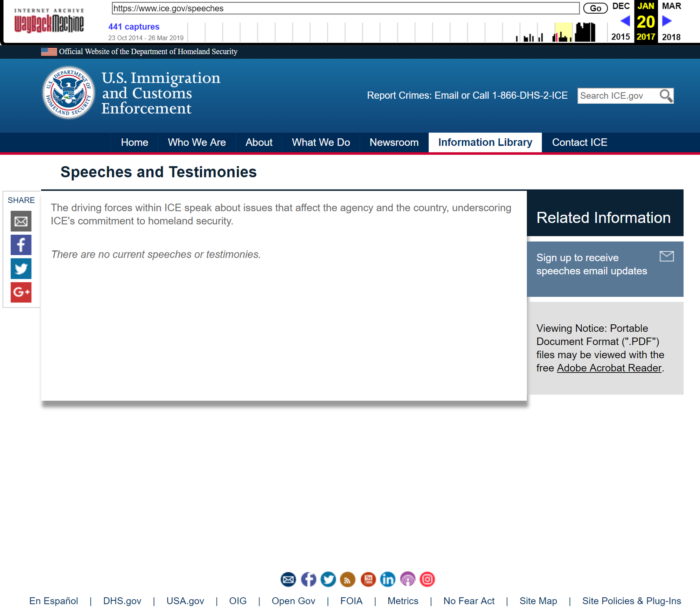 An Internet Archive Wayback Machine capture of the “Speeches and Testimonies” page from late in the evening of January 19, 2017.

In the dying minutes of the Obama administration’s final term, Immigration and Customs Enforcement (ICE) removed from its website a collection of almost 200 speeches and testimonies delivered by agency leadership dating back to 2004. With a couple of clicks of a mouse, access to a federal government web resource containing 12 years of primary source materials on ICE’s history was lost. In our most recent report, the Web Integrity Project (WIP) documents the removal of this collection.

As our report details, a collection of 190 transcripts of speeches and testimonies hosted on the ICE website’s “Speeches and Testimonies” page was removed between the early afternoon of January 18 and late evening on January 19, 2017. (Compare the Internet Archive’s Wayback Machine captures from January 18, 2017 and on January 19, 2017.) The transcripts were of speeches and testimony delivered between 2004 and  2017 by high-ranking ICE officials, including the director of the agency and directors of ICE sub-units. Most contained prepared remarks submitted to congressional committees, often on controversial topics like the standard of medical treatment for detainees, treatment of unaccompanied children, sanctuary cities, drug trafficking, and E-Verify.

Testimony from Thomas Homan, who was appointed Acting Director of ICE by President Trump soon after inauguration in January 2017, featured prominently in the removed collection. In one removed transcript — a February 2016 statement to the Senate Judiciary Committee about the “Unaccompanied Children Crisis” — then-Executive Associate Director of Enforcement and Removal Operations Homan detailed how ICE contracted out to “effectuate” the transportation of “UC” and enumerated the “important steps” that the administration had taken to “deter illegal immigration.” In another removed transcript from May 2016, Homan detailed how local jurisdictions “limiting or declining cooperation with ICE” put “the public at risk.” It is not inconceivable that an outgoing Democratic administration might want to avoid preserving these public stances for future scrutiny.

Among the removed transcripts with less controversial content, then-Assistant Secretary, Michael Garcia, purports to quote Ricky Martin at a 2004 United Nations luncheon regarding Child Sex Tourism. Another contains the remarks of then-Director, John Morton, at the funeral of Special Agent Jaime J. Zapata. While less politically salient, these transcripts are important pieces of ICE’s history.

The removal of the ICE speeches collection represents the loss of a primary source history of the early days of ICE, dating back to its creation during the George W. Bush administration in 2003. It would have been especially useful for social scientists and historians wishing to understand the way ICE, in its formative years and while mired in controversy, interacted with the public and understood its role. The collection is revealing because ICE deliberately curated it over many years, choosing which testimonies and speeches to publish (and which to omit) based on its priorities and the public image it wished to project.

The collection is difficult to recreate. The URL for each of the 190 removed transcripts either returns a “file not found” notice or redirects to a search page with no results. The collection has not been moved to the archive section of ICE’s website and not all of the transcripts were captured by the Wayback Machine, the independent nonprofit web archiving service run by Internet Archive.

Extensive searching reveals that some of the content is available elsewhere from disparate sources: the Government Publishing Office (GPO) preserves some U.S. Senate and U.S. House testimonies in its archive of congressional hearings; ICE’s parent agency, the Department of Homeland Security (DHS), hosts an archive of testimonies and a separate collection of news items dating back to 2009; and the Homeland Security Digital Library, a collection sponsored by DHS and the Naval Postgraduate School Center for Homeland Defense and Security, contains some ICE testimonies, speeches, and press conference statements. However, when WIP laboriously researched the availability of the content from alternative sources, we were unable to track down a large number of the speeches. Reassembling the portion of the collection took many more hours than we care to admit. The results of our efforts are detailed in this spreadsheet.

As part of the transition from one presidential administration to another, agencies naturally make numerous changes to their websites. These changes may be routine, but they also may involve the removal of information of historical or political importance.

Web archiving practices that preserve web content from an outgoing administration should be standard. Programs and software that preserve public access to content from previous administrations without limiting the incoming administration’s ability to change their live websites, such as Archive-It (a service of the Internet Archive), are widely available. However, many federal agencies, including ICE, have not taken steps to prevent the loss of formerly accessible information.

Poor archiving practices is one of the web governance issues WIP encounters most frequently. In response to the pervasive shortcomings around archiving in the federal web, over the next few weeks WIP will publish a blog series about archiving in the federal government, with a particular focus on archiving during transitions from one administration to the next.  We will set out the technological landscape, discuss existing archiving practices within agencies, describe the regulatory framework governing web archiving, and make recommendations for best practices. Stay tuned.