The U.S. Refugee Admissions Program FAQ factsheets were regular and widely-cited publications with origins that date back to the Bush administration. 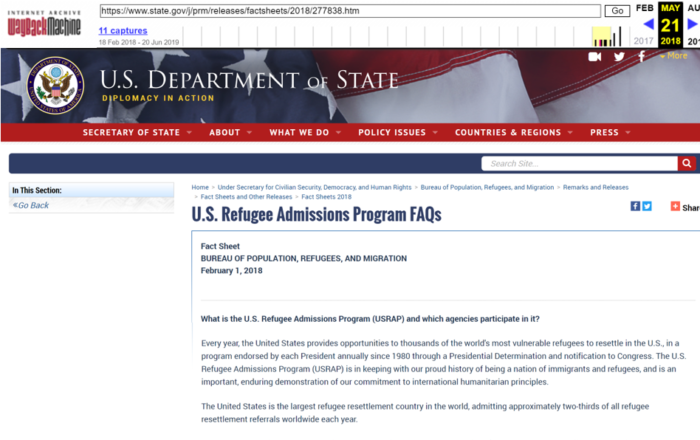 The 2018 version of the “U.S. Refugee Admissions Program FAQs” factsheet as captured by the Internet Archive’s Wayback Machine on May 21, 2018.

As documented in our most recent report, the State Department removed two detailed and authoritative factsheets relating to the U.S. Refugee Admissions Program (USRAP) from its website, despite their having been widely cited in academia and in amicus curiae briefs. Charles Clark at Government Executive covers the removals here.

USRAP, an interagency program managed by the Bureau of Population, Refugees, and Migration (BPRM) at the State Department, has resettled tens of thousands of refugees each year since 1980. Its recent history, however, has been less than smooth. Soon after taking office, President Trump suspended USRAP for 120 days so that new security and vetting processes could be implemented. He also reduced the admission cap from 110,000 early in FY2017 to 30,000 for FY2019. Correspondingly, the number of refugees resettled dropped to a quarter of the number resettled in FY2016.

It is in this context that the BPRM published the 2017 and 2018 versions of its regular “U.S. Refugee Admissions Program FAQs” factsheets, releasing the 2017 version on the first day of President Trump’s term (January 20, 2017) and the 2018 version 13 months later.

The factsheets were cautious, lengthy, and detailed documents, presented in a diplomatic style characteristic of the State Department, which avoided politicized language and legalese. Both the 2017 and 2018 versions answered such questions as “How does the U.S. Government decide who qualifies for refugee status under this program and who doesn’t?”, “What happens to refugees once they are admitted to the U.S.? Who works with them domestically?”, and “Where do the UNHCR and DHS interviews take place?”

Thanks to the archiving practices the State Department has employed in the past, and the efforts of the Internet Archive’s Wayback Machine, we know that the factsheets had been published almost annually since 2013 and have their origin in content added in 2008, during the George W. Bush administration. The 2008 content gradually evolved into a stand-alone factsheet that was updated regularly with the most recent statistics and developments.

The factsheets carried considerable weight in the academic and legal community. The 2017 edition of the “U.S. Refugee Admissions Program FAQs” factsheet was removed in December 2017 or January 2018, about a year after it was first posted. Before its removal, it was widely cited as an authoritative source on U.S. refugee resettlement practices, including in academic literature and in several amicus curiae briefs supporting legal challenges to President Trump’s immigration-related executive orders. (See, for example, this amici curiae brief filed by religious organizations in Hawaii v. Trump.)

The 2018 edition, identical to the 2017 edition save for one sentence, was removed in May or June of 2018, less than five months after its initial publication. In that short time, it was cited in peer reviewed articles, edited collections, a law review article, theses and dissertations, and by think tanks.

A representative from the State Department declined to comment on the record about the removals.

Soon after the Web Integrity Project contacted the State Department, the agency created a new redirect for the URLs of the FAQ factsheets. The URLs for the factsheets, like many other URLs after State.gov’s May 15, 2019, overhaul, had led to a notice that explained, “We recently redesigned State.gov.  Many pages are now on our most recent Archive page.” As of June 20, 2019, the URLs redirect to the “State.gov Website Modernization” page, which states:

“We recently modernized our website. Part of this modernization was to reduce the number of pages on the current state.gov website by not moving items that are in existence on our archive sites.”

Neither factsheet is preserved in the State Department’s archive sites.