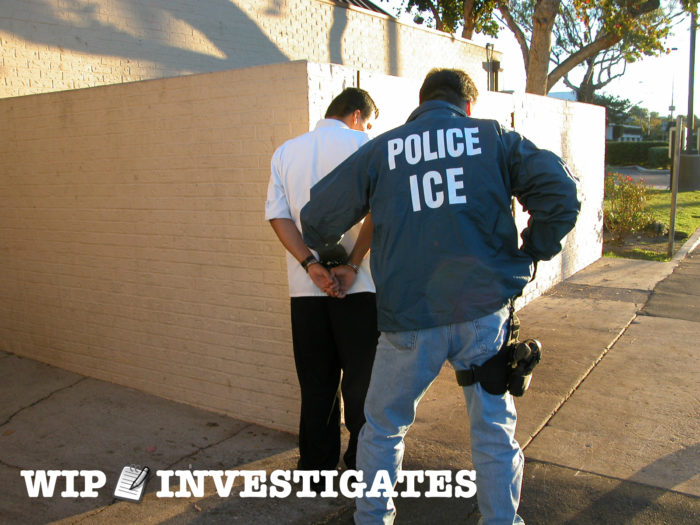 As the Trump administration ramps up arrests of undocumented immigrants, the number of individuals incarcerated on immigration charges has increased nearly 40 percent since 2016, to a record-high daily average of more than 54,000. But even as the need to keep tabs on those being held in the system has never been greater, attorneys and advocates say a basic part of the detention architecture — an online resource used to locate incarcerated immigrants — isn’t up to the task.

The Online Detainee Locator System (ODLS), run by Immigration and Customs Enforcement (ICE), is a vital lifeline for detained immigrants and their families. When it functions well, it’s often the best way to find where immigrants detained for immigration matters — those facing deportation for various violations or challenging decisions by immigration authorities — are being held. But the system is slow to update, and its basic structure leaves it vulnerable to data entry mishaps and other technical glitches, attorneys and others who spoke with the Web Integrity Project (WIP) say.

“Sometimes the issue is that the locator just won’t load, and I can’t even input any information to find someone,” says Leah Barr, an attorney with the National Immigrant Justice Center in Chicago, recounting a common experience with the locator. “And sometimes people aren’t showing up in the locator who actually are in custody. Everything loads, and it tells me ‘no results found.’”

In the fall of 2018, the American Immigration Lawyers Association (AILA), in partnership with WIP, sent a survey to its members about the ODLS. (Note: the survey was non-representative, and informal.) Of the fifty-seven attorneys who responded, two-thirds gave the system poor reviews. Many reported that the ODLS performed badly enough that they used it less as a result. The primary problems respondents reported had to do with data entry; there are frequent errors, and often a delay in updating system information when immigrants first enter custody, or when they’re moved among the many facilities nationwide.

When stakes couldn’t be higher, the system’s sluggishness can have serious consequences, says Christian Frank, an attorney based in Colorado. Frank says it routinely takes 48 hours or more for a detained individual to appear in the system, and frequently longer. In that time, they can’t express their wishes to their attorneys, or communicate with friends and family. He and his staff rely on the system to locate clients many times a day.

The delays aren’t necessarily new — attorneys said they had also experienced delays in years past. But the challenges posed by those delays have been exacerbated as the Trump administration accelerates deportations, Frank says. Recently, individuals might be on a bus or plane before he can determine where they’re being held. The biggest issues arise when the time to act is short, as in the case of people who have reinstated removal orders — final decisions of deportation — and may actually be out of the country in as little as a day or two.

“When I was dealing with removal orders under the Obama administration, at least the documentation and the speed of time in which the person was removed from the country was less,” Frank says. “In other words, we didn’t have to run around like headless chickens within 48 hours.”

Slow updates like those described by Frank were the most common problem reported in our survey, followed closely by problems with inaccurate data entry. These complaints were echoed in interviews with attorneys and advocates beyond the survey group, and expanded upon in follow-up conversations with some who filled out our survey. The survey responses ranged widely, from general satisfaction to deep frustration. One respondent was especially succinct in their assessment of the locator, writing simply, “it sucks.”

Many of the problems attorneys reported stem from the system’s built-in rigidity. In contrast to comparable services — like the online inmate locators used in the federal and many state prison systems — the ODLS can’t “search” for detainees in the way most people would find familiar; only precise matches will produce a result.

According to ICE, the ODLS was meant to modernize the immigration detention system. As the agency’s privacy assessment described its purpose as it was being rolled out, “the public will be able to locate detainees more quickly and efficiently through an online query” in contrast to the previous system, which required “members of the public [to] contact a DRO field office by phone to determine the location of a detainee.”

But the shortcomings of the ODLS mean that attorneys are often forced to revert to precisely those methods of the past. Our survey showed that the overwhelming majority of respondents had turned to phone calls when the ODLS couldn’t locate people they knew should have been in the system. (Ironically, according to Frank, the Colorado-based attorney, he has occasionally had facility staff themselves use the ODLS to locate clients over the phone, potentially relying on the same erroneous data that prompted the call to begin with.)

Searches in ODLS can be performed either via the detainee’s name and country of origin, or with an “Alien number,” commonly called an A-number, a unique identifier issued to people going through immigration proceedings.

Most attorneys reported that searches with an A-number — when available — generally work well enough. (A complicating factor for A-number searches is that families of detained individuals may not have that information on hand, and attorneys representing new clients generally don’t have access to their A-number.) But name searches can be more challenging. The ODLS interface only allows users to enter a first and last name, a format that can cause problems.

“A lot of people from Latin American countries have two last names,” notes Barr. With only two fields in the locator, it can require some guesswork to determine how a given client’s name has been rendered.

Virtually every attorney WIP spoke to reported problems with name recording, often attributing errors to cultural unfamiliarity. A few suggested that the mistakes could be deliberate, without offering any definitive evidence.

ICE spokesman Brian Cox did not address a list of detailed questions related to the ODLS, but noted in an email to WIP that there were several telephone-based avenues attorneys and others could use to locate individuals in detention. He also noted that individuals in detention are able to receive visitors and communicate with attorneys and others. Cox did not address WIP’s inquiries about data input, glitches in the system’s captcha, or questions about the system’s name input format.

While confusion over naming conventions is one problem, data entry that is simply careless can be another. That can lead to absurd results, like when Carlos Hernandez (not his real name) was arrested by armed officers outside his home in California’s Central Valley in 2017.

It wasn’t immediately clear what had happened to Hernandez. Neighbors had witnessed the arrest, but hadn’t seen any identifying marks on the clothing of the men involved, or their vehicle. Hernandez had been without legal status for years after immigrating from his native El Salvador, so his family suspected he had been picked up by immigration authorities. But, for days, they’d heard nothing from him.

“Of course, when ICE picks someone up from their home, they don’t leave a note, or any sort of information about what happened,” says Cathy Brasil, a California-based paralegal who assisted Hernandez’s family in their attempts to locate him.

Given where he’d been apprehended, Hernandez could have been transferred to any number of facilities in nearby urban areas in the Bay Area, Los Angeles or Orange County. Because Hernandez did not yet have an A-Number, their only option was to enter his name, birthdate, and country of origin.

Brasil knew it could take a day or two for the system to update with new detainees, so she wasn’t too worried when his name didn’t immediately return a match. A week passed. When Brasil finally called ICE directly, they said the system could take up to two weeks to update with the correct information, so they kept trying. When two weeks had elapsed, and there was no sign of Hernandez in ICE’s system, his family began to fear that he had been deported. It was then that the family finally received a phone call from Hernandez, who was detained in a facility in Southern California.

When Brasil finally learned Hernandez’s A-Number, she entered it into the ODLS, and realized what had gone wrong: the name that popped up was “Arlos Hernandez.”

According to a privacy assessment produced by ICE in 2011 when the ODLS was being launched, the exacting requirements described above were a deliberate choice, part of an attempt to protect the privacy of immigrants in the system.

“Although anyone can submit a query in ODLS,” that report noted, “the system is designed to ensure that only users who know something about the detainee can perform a successful search. For example, users must enter at least two discrete identifying pieces of information about the detainee to successfully submit a query. In addition, ODLS uses exact-match searching to help limit the search results returned, thereby avoiding over-exposing detainee data.”

Unlike criminal and civil judicial proceedings — the records of which are public by law — most immigration proceedings are considered confidential.

The requirements of the ODLS seemed mostly reasonable to attorney Margo Schlanger, a practicing attorney and Professor of Law at the University of Michigan Law School, who said that in her experience, loved ones of detainees typically know their A-numbers.

“I’m not sure who would need to be locating someone without an A-number,” she said. She also noted that in a large, nationwide system, requiring several kinds of information could help reduce false matches and might protect privacy.

The issues that attorneys described to WIP generally came down to faulty data entry of some kind, but others reported more mundane technical challenges. Powell, the attorney based in California, said she had had a lot of trouble with the system’s “captcha,” a difficulty echoed by others. Designed to prevent automated queries, a captcha is a concept familiar to any internet user, but on the ODLS system it takes the form of a simple arithmetic problem. Add up the numbers, and a user should be home free.  According to Powell, however, a correct answer to the simple equation sometimes still wouldn’t resolve the captcha.

“I did go to school for 19 years,” Powell jokes of the glitch. “Admittedly, math is not my strongest suit, but I’m quite confident of my math skills to add, you know, single digit numbers.”