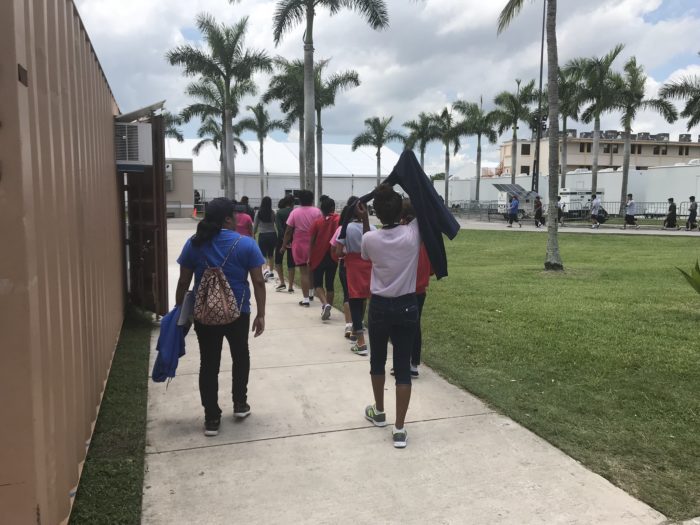 Children at the ORR facility in Homestead, Florida (Department of Health and Human Services).

Since taking office, the Trump administration has made restrictions on immigration a centerpiece of its agenda. In pursuit of that agenda, the administration uses rhetoric that portrays immigrants and refugees as deviant and dangerous characters. A new report by the Web Integrity Project shows how the Trump administration has used a key platform, the official Office of Refugee Resettlement (ORR) website, to further this rhetoric. Jim Daley delves deeper into the context and meaning of these changes in In These Times.

An analysis of changes made to the ORR website by the Trump Administration revealed three key themes:

ORR systematically changed the terms “unaccompanied child,” “UC,” or “child” to the dehumanizing language of “unaccompanied alien child” or “UAC.” Using a content analysis script WIP developed, we show that the term “alien,” which before Trump’s inauguration was used on the ORR website 103 times, now appears 720 times (an increase of 599%).

During the previous administration, ORR rarely used the term “unaccompanied alien children,” despite the fact that that term is codified in statutory language. The change in terminology seems to indicate a deliberate hardening of language, as in the past, ORR seems to have made an effort to avoid using the term ‘alien,” perhaps recognizing its stigmatizing effect.

ORR also issued a revision of the January 2016 version of a fact sheet on unaccompanied children’s services, making some notable changes. Language about how ORR values “[t]reating all children in its custody with dignity, respect and special concern for individual needs,” the “child welfare based-model of care for children,” and a paragraph about the push- and pull-factors influencing the decision to “undertak[e] the difficult journey of traveling to the United States” were removed.

As media scrutiny of the office increased in 2018, ORR’s website was frequently changed in reaction to the latest criticism it faced. As we previously reported, ORR appeared to have taken pre-emptive action to limit media access to its staff by removing the staff directory from its website late in 2017, perhaps anticipating the likely fallout from a family separation policy that was yet to be announced but was already in force. Later, ORR was highly responsive to, and defensive about, media stories relating to the family separation policy. Over a six week period in late June to early August, 2018, when outrage over the family separation policy reached its peak, ORR frequently updated its website in response to the latest news stories, updating the “Unaccompanied Alien Children Frequently Asked Questions” page no fewer than seven times to add or remove information relating to topics like the conditions in ORR facilities, sexual abuse of children in its custody, and DNA testing of children.

In a response to WIP’s queries, an HHS spokesperson said, “Webpages universally are updated frequently to reflect the latest information available. ORR’s website is no different. Our website may be updated as new policies and procedures are incorporated into the program or if current policies are modified,” and pointed to “Statutory Authority” including the Homeland Security Act of 2002, as to why they are using the term “alien.” The spokesperson did not comment on why, in the past, ORR had used language different from the statutory authority, nor what led the agency to change their position in favor of the term “unaccompanied alien child.”