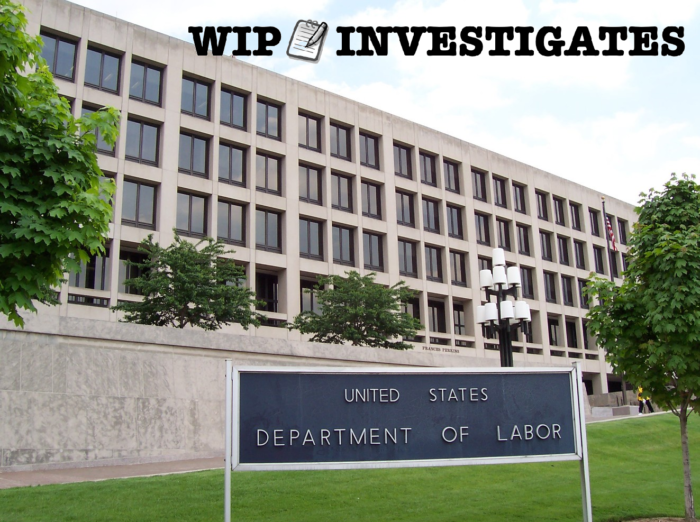 Some of the most notable changes we observed were related to federal prohibitions on discrimination, particularly against transgender people, which came amid an ongoing flurry of rulemaking related to anti-discrimination protections at the Department of Health and Human Services and the Department of Labor. Each of the rulemaking efforts ties into one of the Trump administration’s central policy themes — initiatives designed to protect “religious freedom” — and each has significant implications for the rights of the LGBTQ community.

In two instances, these rulemaking efforts, neither of which have been finalized, seem to have led to shifts in online messaging that either foreshadowed the formal rulemaking process, or were the result of agencies attempting to adjust to the implications of proposed regulations. As such they offer useful insight into how formal policy and unofficial online communication relate to one another.

A handful of important changes noted in our report occurred on the Department of Labor’s website, to pages detailing discrimination in the workplace. The changes were significant, not just because they represented a reduction in access to information about such prohibitions, but because they predated and seemed to foreshadow formal policy changes.

By at least February 7 of 2017, less than a month after the new administration took office, a webpage related to a key Obama-era executive order barring discrimination by some federal contractors against transgender workers — known as EO 13672 — was removed. The page contained information about and links to “community and other resources” that could assist federal contractors with compliance with anti-discrimination rules. Around the same time, a separate page featuring “frequently asked questions” about workplace discrimination by contractors was heavily edited to remove references to EO 13672.

These changes are notable because EO 13672 is still in effect, unlike other Obama-era EO’s revoked by the Trump administration. And as public-facing information that sought to educate people on the state of federal anti-discrimination measures, materials related to EO 13672 were an important resource for people to learn about their rights, says Frank J. Bewkes, a policy analyst with the Center for American Progress.

Bewkes wasn’t surprised, however, that the materials were altered, because an ongoing rulemaking process announced in August is set to significantly weaken the impact of EO 13672. As such, the changes observed on the DOL website might have foreshadowed official policy long before it became public. The fact that the materials were altered online before a formal rulemaking process was completed is troubling, according to Bewkes.

“The rule is what the rule is, until it changes. You can’t change something preemptively. Essentially all they’re doing is hiding the ball and making people less aware of what their rights are,” Bewkes told WIP. “And that is a problem.”

Signed in 2014, EO 13672 built on earlier executive order, EO 11246, which was signed by President Lyndon Johnson, and prohibited discrimination by large federal contractors on the basis of “race, creed, color, or national origin.” EO 13672 amended that order, and added “gender identity” to the list of protected characteristics. (An intervening amendment to the Johnson order, signed by President Bill Clinton in 1998, added “sexual orientation” to that list of protected characteristics.)

The rules affecting EO 13672’s protections for transgender workers come at the issue somewhat indirectly, Bewkes explains. While other rulemaking by the Trump administration has explicitly eliminated gender identity protections — that is, rules that prohibit discrimination against transgender people and others who don’t conform to gender stereotypes —  the DOL rules currently under consideration would not explicitly eliminate gender identity protections in EO 13672. They would instead affect EO 11246, the original Johnson order, by expanding the ability for religious individuals or organizations to claim an exemption to its discrimination provisions.

Critics argue such an expansion would effectively make the discrimination protections meaningless. If any contractor could hire and fire based on their religious beliefs, it could open the door for discrimination of all kinds, as Bewkes explains. LGBTQ workers would be particularly vulnerable, but, critics argue, as currently written the rules would also open the door to discrimination based on race, national origin and any other protected class enumerated in the Johnson order.

The second significant change on the DOL website was the removal of a page linking to resources designed to help federal contractors comply with anti-discrimination rules. Both private nonprofit advocacy groups and other government resources were represented.

Both Bewkes and Adam Romero, Director of Legal Scholarship and Federal Policy at the Williams Institute at UCLA, said the removal of useful outside resources was concerning, and hard to explain as part of a policy shift. There’s no reason a list of anti-discrimination resources would be made less useful by the rulemaking process.

“The removal of that page not only deprived employers and employees of valuable guidance regarding Executive Order 11246’s protections against sexual orientation and gender identity discrimination,” Romero said in an emailed statement, “but also reflects a disturbing pattern of hostility toward LGBT people by the Trump Administration.”

Centers for Medicare and Medicaid Services

In May of 2019, the Department of Health and Human Services (HHS) released new proposed rules for administering Section 1557 of the Affordable Care Act (ACA), which contains the law’s key anti-discrimination provisions.

Section 1557 had been interpreted by the Obama administration to provide transgender people with significant protections against discrimination in healthcare settings, but the current administration’s new framework would eliminate those protections. HHS’s Office of Civil Rights, which enforces anti-discrimination provisions and is the authority behind the proposed rule, explained the policy shift by claiming that the previous interpretation exceeded HHS’s authority, and argues eliminating protections for transgender people would lower costs for healthcare providers by reducing liability.

It was apparently that policy shift at OCR that prompted another notable change detailed in our report, this time to the website of the Centers for Medicare and Medicaid Services (CMS).

The changes came to a page on the CMS website titled “Transgender health care,” which laid out the rights of transgender people in the medical system, and warned that denying services for transgender people could be illegal in some cases. The page encouraged people who believed they had been the victims of discrimination by insurers or other regulated entities to reach out to authorities to file a complaint.

The page was altered between May 31 and June 3, 2017, in what looked at first glance like a minor way.

“If you believe a plan unlawfully discriminates, you can file complaints of discrimination with your state’s Department of Insurance or the U.S. Department of Health & Human Services Office for Civil Rights,” the page originally read.

Between May 1, 2017, and June 3, 2017, the contact information was altered to direct complaints to CMS, rather than HHS’ Office for Civil Rights:

“If you believe a plan unlawfully discriminates, you can file complaints of discrimination with your state’s Department of Insurance, or report the issue to the Centers for Medicare & Medicaid Services by email to marketconduct@cms.hhs.gov.” (Emphasis added.)

A CMS spokesperson cited a decision in a Texas district court that enjoined OCR from enforcing the regulations that had provided some protection to transgender individuals in healthcare settings. A number of regulations still allow CMS to pursue such claims of discrimination, the spokesperson said, so complainants were rerouted to that office.

While the changes to the DOL site discussed above seem to foreshadow rules changes, the changes on the CMS site might also be affected by ongoing rulemaking, says Harper Jean Tobin, Director of Policy at the National Center for Transgender Equality.

“In theory, [CMS does] have the authority to notify insurance companies that a plan document doesn’t seem to comply with existing laws or rules,” or otherwise enforce some kinds of discrimination. But those rules are also under threat from the ongoing HHS rulemaking that affected OCR’s enforcement, thanks to a late addition to the federal register that included CMS in the new rules.

Neither DOL nor HHS responded to a request for comment for this story.