Many cities with open data policies are taking new and varying approaches as to how they engage their open data users and manage their relationships with the broader community. These approaches may differ based on the strategic goals and capacity of an open data program, but given that this work is still relatively new, there are lessons and ideas that cities can benefit from sharing.

In each case, we highlight the potential outcomes and impacts of these cities’ work which can be defined and assessed in terms of our community engagement impact framework. For a more in-depth look of a city’s community-engagement work around open data, see the applications the framework to the open data programs of Louisville and Pittsburgh.

One of Boulder’s most successful community events to incorporate open data was the Art of Data, an exhibition co-sponsored by Boulder Public Libraries and the City’s Open Data Program featuring community members’ artwork that was inspired by one of the City’s open datasets. 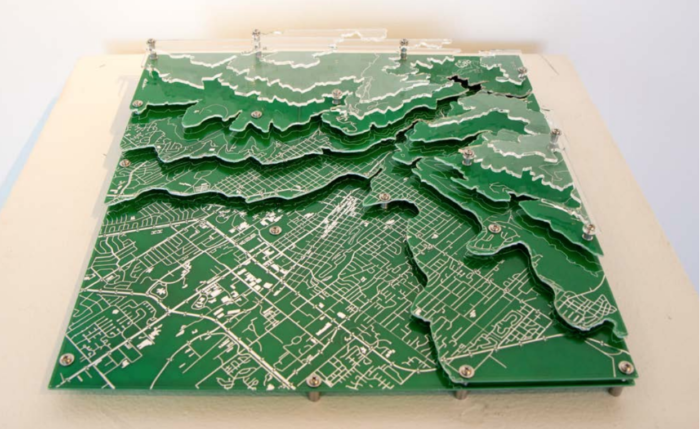 Defining what made this event successful, however, isn’t simple. On the one hand they could point to numbers such as attendance, or the connections they made with community members and potential partners. Bill Skerpan and Nicolia Eldred-Skemp, who help run Boulder’s Open Data Program, note that what made the event feel impactful was the general sense of interest and engagement of the community throughout.

This was significant not just as a sign of gaining public interest in open data, but also because it helped city employees see how open data can be valuable to the community. “It can boost staff morale to have a successful event that people are excited about,” Nicolia says, “but that’s another thing that’s hard to quantify and capture.”

Boulder’s open data program already has a robust system for measuring online user engagement and their published Open Data Strategy details many quantitative metrics that measure their progress toward their strategic goals. In the future, they hope to incorporate more qualitative measures of success by surveying residents in collaboration with the Public Engagement office, which could eventually give them better insight to how open data is influencing residents’ levels of civic engagement.

The open data program in Gilbert, Arizona is unique in that it emerged from a program focused on engaging Gilbert’s youth with technology. Derek Konofalski, who currently leads Gilbert’s open data initiative, had been running SPARK App League, a program hosted by the Town and Arizona State University that provides annual mobile-app development competitions for middle- and high-school students. Wanting to add a civic-tech element to these competitions, Derek would get available data from the Town of Gilbert to be used by students. Seeing an opportunity for Gilbert to develop a more robust open data program, Derek applied for support from What Works Cities and ended up developing the Town’s Open Data Administrative Procedure.

Today, Gilbert’s open data site comprises two elements. One is their data portal hosted through ArcGIS. The other is Alex, an avatar developed to answer and accompany users in their exploration of open data. Alex was developed with residents in mind, from novices to data analysts. On Alex’s site, the user can be walked through data stories with a tour, watch a video introducing Alex and the open data portal, and read through detailed instructions on downloading data. “We can see that most of our users are getting to the data portal via Alex, so that tells us we do have a lot of users who aren’t necessarily data scientists.” 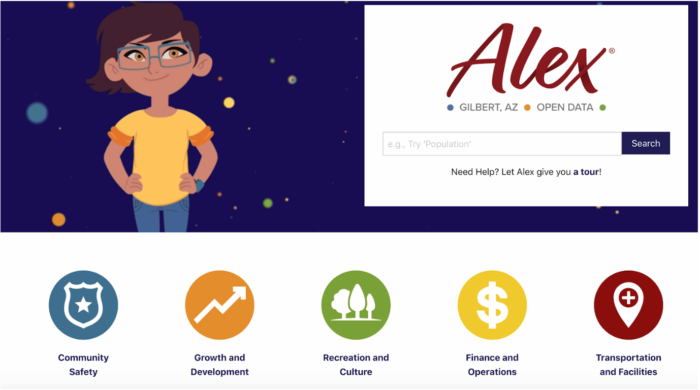 Gilbert’s open data program is unique in that it is housed within the Town’s Office of Digital Government, which handles the Town’s internal, external and digital communications, rather than in an IT department, so telling high-quality stories through city data is an important component of the program. On a page titled “Growth and Development,” residents can view different stories and visualizations that explore the changes in population, employment, and development in Gilbert over the last four decades. Linked to these stories are the raw datasets. Derek hopes that all of their datasets can have accompanying stories or visualizations and that users will feel empowered to replicate or make their own stories with the data.

Gilbert hasn’t hosted any community meetings focused solely on open data, but the data has come up in other public meetings around safety and development. Derek hopes that going forward, whenever data is referenced in these meetings, they will tag or reference Alex and the open data portal. This will connect those who are already civically engaged to the portal and Alex herself, eventually growing their user base by bringing in new users who are excited to employ open data to advocate and hold local government accountable.

Given that users of open data often remain anonymous, tracking down users to identify program improvements and learn about open data success stories can be a challenge. In an effort to give users more opportunities to engage with data portals, some cities will host some sort of online forum for users to post questions or requests. For OpenDataPhilly, users can post to a Google Group. Kistine Carolan, Philadelphia’s Open Data Program Manager, will often ask users how they’re using city data in her responses to their inquiries. This gives her a sense of who some of their users are and how open data furthers their goals.

In addition to online conversations, there are other important user stories she’s learned about through in-person community meetings. For instance, the City developed Atlas, an interactive map that displays property, zoning, and inspection data for all Philadelphia addresses. The City had already known of its use by real estate developers or potential home buyers. But it was in a forum organized by Philadelphia’s Millennial Advisory Committee, Kistine learned that long-time residents in West Philadelphia were also using Atlas to improve their neighborhood and deal with housing issues. A presenter from an area nonprofit shared how they regularly use Atlas in their work with residents to identify negligent owners of vacant buildings, in order to advocate that they maintain and develop the property. When vacant buildings are left to deteriorate, neighbors often see lower property values, and an increase in pests, risks to adjoining properties, and crime.

Philadelphia also works to make open data more accessible to residents by strengthening the City’s internal capacity when it comes to data. There are city departments that are less data-inclined or lack staff who can use data to inform their programs and policies. If departments can incorporate open data to build more tools or visualizations, both staff and residents could be more informed.

The City is working to increase their ability across departments to make tools, like Atlas, that residents without deep analytic skills can use. Kistine hopes that increased civic engagement among communities can continue to improve City services. This approach can have a longer-term impact, making insights from open data more accessible to diverse populations within the city. The open data program can ultimately assess this by creating more connections with these users and learning how the tools are contributing to their work and experiences. To further explore the impact of Philadelphia’s open data, the City is currently developing a survey to capture stories of how residents use City data, and identify the ways the open data program can grow to best meet the public’s needs.

Learn how to apply the framework in your city!