Apps for when the next bus will come are great, but what about the next law?

A simple twist on the traditional budgeting process has us paying attention to payoffs for transparency. Participatory budgeting (PB) is a political process that lets members of a community vote on how certain budget funds should be allocated. By including the public in decision-making, PB has the potential to be an agent of accountability, helping to demystify city budgets, to turn voters into active contributors and informed monitors of government progress, and to help support efforts for proactive budget disclosure. As it stands today, PB helps communities explore many of these opportunities, and it serves as an important gateway to engagement with local government for a wide variety of residents, especially traditionally-underrepresented groups. It’s a transformative process -- one that may cost governments almost nothing, since it just reallocates existing funds -- and it's a process we’re eager to see explored in more detail as more and more communities hold a magnifying glass to budgetary data.

The White House’s new Executive Order may be significantly different than the open data policies that have come before it on the federal level, but where does it stand in a global -- and local -- context? Many folks have already jumped at the chance to compare this new US executive order and the new policies that accompany it to a similar public letter issued by UK Prime Minister David Cameron in 2010, but little attention has been paid to one of the new policy’s most substantial provisions: the creation of a public listing of agency data based on an internal audits of information holdings. As administrative as this provision might sound, the creation of this listing (and the accompanying scoping of what information isn’t yet public, but could be released) is part of the next evolution of open data policies (and something Sunlight has long called for as a best practice). So does this policy put the U.S. on the leading edge? Continue reading 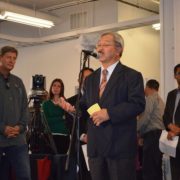 Since the release of Sunlight’s Open Data Policy Guidelines last June, Chicago, Madison, Montgomery County, and Utah have all enacted open data laws, and the states of Hawaii and Ohio are both in the process of enacting open data legislation. However, the recent amendment of San Francisco’s two-and-a-half-year-old open data ordinance (ancient in the open data policy world) demonstrates a new frontier for these policies: Evolution.

San Francisco is unique in having been one of three cities to have an open data policy enacted before the federal Open Government Directive and in being the only city that has revamped their open data policy not once, but twice: first in 2010, expanding their bare bones 2009 executive order into a longer, more robust administrative code, and for a second time in late March 2013, amending the administrative code language.

Sunlight identified in our Open Data Policy Guidelines the importance of future review for potential changes to policy and law, and we were glad to see that San Francisco’s most recent amendment not only incorporated many more of Sunlight’s Guidelines, but also broke ground in the United States municipal open data policy world -- arguably taking the title from New York City. Of significance, San Francisco’s amended ordinance creates new oversight authority to review implementation of their open data policy requirements (Sunlight guideline #27) by creating the position of Chief Data Officer (CDO) and requiring the appointment of Department Data Coordinators (DCs) to assist in the implementation of San Francisco’s open data policy. The CDO is tasked with working with DCs to create an open data plan for each Department including: “a timeline for the publication of the Department’s open data and a summary of open data efforts” (#22) and “a summary description of all data sets under the control of each Department” (#18). The CDO is also responsible for creating an annual citywide implementation plan, while each department is delegated to conduct quarterly reviews of their progress, the combination of which sets up procedural expectations that help ensure data quality (#17). The amended language also calls on the CDO to produce analytics on the use of San Francisco’s data portal, DataSF, (as recommended by guideline #32 and incredibly important in determining usefulness and in cost benefit analysis), but unfortunately does spell out specific requirements of these analytics.

When it comes to tracking meetings between lobbyists and legislators, San Francisco has taken impressive steps toward online disclosure. Lobbyists... View Article

Gavin Newsom the Mayor of San Francisco has started putting his State of the City addresses on You Tube. You... View Article

Would you talk to this man? The San Francisco Examiner reports on a proposed bill by San Francisco Supervisor Chris Daly that would require lobbyists to wear identification badges when they contact city officials. This seems kind of silly to me. Lawmakers know these lobbyists and should know when they are being lobbied. They don't need to read badges to figure out what is going on. If anything greater and more timely, as in immediate, disclosure to the public should be implemented and not some sort of cattle branding.

(Pictured above: The Open House Project's John Wonderlich, our lobbyist for Big Transparency.)

The San Francisco Board of Supervisors will take up – and likely pass – a proposal to allow for the public financing of city mayoral contests, according to the San Francisco Chronicle. Leaders of both of the two major San Francisco political parties – the Democrats and the Greens – support the reform measure, although Democratic Mayor Gavin Newson believes that the current campaign for public financing targets him and his campaign which outspent his Green Party opponent, the President of the Board of Supervisors Matt Gonzales, nearly 6-1.