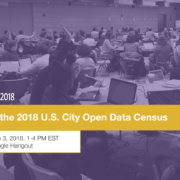 The Sunlight Open Cities team invites you to join us for Open Data Day 2018 on Saturday, March 3, when we'll be filling out the newly relaunched U.S. City Open Data Census. We'll be coming together in Washington DC, New York, and online with an easy tutorial on how to search for open datasets and how to add that information to the Census. 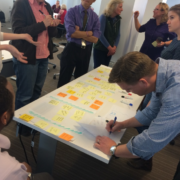 By designing open data programs around the needs of residents, city governments can build trust with communities, creating new opportunities for accountability and effectiveness. This has the ability to spark positive civic action for the greater good.

For the seventh year in a row, people around the world are celebrating Open Day Day this spring. 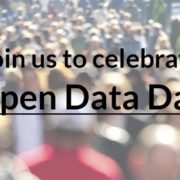 International Open Data Day is on March 4th -- and you're invited! Please join us in DC at the OpenGovHub on Saturday.

March 5, 2016 is Open Data Day, and it’s right around the corner! Here's what you need to know about this worldwide effort to support and encourage the use of open data.

Sunlight Foundation together with Code for America are partnering to take data beyond transparency through CodeAcross 2014.

The third annual International Open Data Hackathon is this Saturday, and it’s an exciting opportunity to explore what’s possible with... View Article

This past Saturday was the second annual International Open Data Hackathon, a globally coordinated day for people to gather and hack on open public data from the world's governments. As part of this, POPVOX hosted an Open Data event here in DC at the MLK Memorial Public Library.

Several Sunlighters showed up, and we had a pretty great time. Andrew and I came expecting to work alone on our project, an ambitious attempt to bridge the data gap between legislation and the regulations they generate, that we're tentatively titling Crosslaws. Instead, after we (and everyone else) described our project to the room at the start of the day, we had 6 people come to our table and ask how they could help - 5 of whom weren't developers at all.

Despite Andrew and I not having any obvious tasks to hand out, after we explained the finer points of the work, everyone figured out their own valuable research and development to do for the entire course of the day, from scholarly articles to actual parsing code. You can find some of our group's notes on the Crosslaws wiki, as well as an overview of what's left to be done (there's a lot!).

Drew and Daniel went to the hackathon to work on their statistical analysis of USASpending data, using Benford's Law. They were hoping to find a stats wizard to help rigorously test the findings, and while they weren't able to find one, their search was still fruitful. The project did attract interest from a handful of very thoughtful people, and they had a long discussion that helped refine the goals of the project. Drew was very thankful for that, as he came away from the hackathon better focused on a concrete goal. At the end of the day, they had the parser and downloader written, but weren't able to download enough data to test it thoroughly. You can find Drew's team's code on Github.

In general, it was a fantastic crop of people who showed up on a Saturday morning at the MLK Library, from awesome self-directed policy people, to talented folks from the DC and federal governments. My project got real momentum from it, and we'll be capitalizing on that momentum with more work over the next couple months. Given all that, the hackathon felt like a real success to me, and I'm looking forward to next year's.