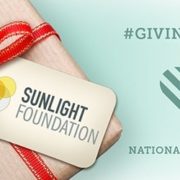 If you value the work Sunlight has done to open government this year, we hope that you'll consider donating to us directly, or shopping on AmazonSmile, where you can support us as you go about your holiday shopping.

Today, the Knight Foundation, along with the data analytics firm Quid, released a fascinating analysis analyzing the financial investment in nonprofits and for-profit organizations that create civic technology apps and platforms through technology. If you include many of the new P2P platforms such as AirBnB and the like (which are private businesses not primarily focused on promoting civic outcomes), there has been a whopping $430 million invested in civic technology, including open government organizations. (Full disclosure, the Sunlight Foundation has received several grants from the Knight Foundation.) It is concerning that the bulk of venture capital and other non-philanthropic investment in civic technology goes toward companies whose primary goals are not to empower citizens in democratic engagement nor to foster government openness and accountability.

The big picture presented by Knight and Quid shows that there is momentum in growing an echelon of financial investors to buttress the nascent civic start-up movement. This peek behind the curtain of the philanthropic and commercial investment world is welcome transparency and very helpful analysis.
Knight civic-tech from Knight Foundation
Continue reading

Here’s something I just learned: The annual budget for political reform groups in the U.S. is a combined $45 million, which amounts to roughly .01 percent of the $300 billion in total charitable giving in 2011. It's also less than one quarter of the Chamber of Commerce’s $200 million annual budget. This funding disparity is a jumping off point for a new symposium over at Democracy: A Journal of Ideas entitled “Everyone’s Fight: The New Plan to Defeat Big Money.” Most significantly, the issue includes a powerful call-to-arms from Nick Penniman and Ian Simmons for the philanthropy community to contribute “One Percent for Democracy”

International aid groups represent more than $130 billion in annual cash flows, and 80 percent of the groups controlling that money fail to provide some basic information about where and how that money is used. Those are the findings of a recent report from Publish What You Fund, a group focused on a global campaign for aid transparency. Though the scores for most groups are low, the results of the 2012 report are an improvement from past years. The average score of a 41 percent transparency rating this year comes after an average score of just 34 percent in 2011.

During Sunshine Week this year, my friend Lucy Bernholz published a “Modest Manifesto on Open Philanthropy” — a must-read that... View Article