“Guess Who’s Coming to TCamp12” is a mini-series we started to introduce some of the faces that you’ll see at TCamp, something we hope will be useful to attendees and non-attendees alike. Last week we highlighted Beth Sebian, Matej Kurian, Michael Mulley, and three awesome Transparency Camp Scholars. We’re kicking this week off with Maria Baron, out of Argentina, and Marko Rakar, from Croatia.

Maria Baron is the Executive Director at Fundacion Directorio Legislativo, a nonpartisan organization in Argentina that promotes the strengthening of legislative branches of government and the consolidation of the democratic system through dialogue, transparency, and access to public information. Maria has a Master’s degree in International Relations from Bologna University, Italy and is a Ph.D. candidate in Political Science at the National University of San Martin, Argentina. She is also a journalist and has worked as numerous organizations in Argentina and abroad that work to reduce corruption and enforce ethical behavior. A Fulbright-APSA Congressional Fellow, she has published seven editions of Directorio Legislativo: Who are our legislators and how they represent us, in addition to numerous other publications about legislative transparency. She took the time to answer a few questions about her work and transparency in Argentina.

Can you tell us how you initially got involved in legislative transparency?

In 1997 I interned at a Washington DC based organization called Witness for Peace that worked to promote changes in the US forign policy and the international institutions, towards some countries in Latin America. We went to Congress talk to members about the situation in the region. So they provided me with a little book with information on who’s who in Congress, members’ bio, staff information, and so on. When I came back to Argentina I decided to replicate that initiative in my own Congress when at the time Congress’ websites only contained the list of the members. And surprisingly, one member appeared both as a representative and as a Senator! I had no organization to back me, so I started fundraising by myself. I found one potential donor that told me, “if you can get all the members to agree to give you all the information, I’ll pay for half of the printing”.I worked for 8 months non stop every day. And the last two months I slept one every to nights. I gathered all the information and used my savings to pay for the other half.  When the book was printed I put them in a big back pack and knocked on every door on every office in Congress. I sold all of them. That’s how I started.

What kind of effects has the publication of Directorio Legislativo had?

* CULTURE of SECRECY: We have battled for legislators’ finantial statements to become public. We created a volunteer network of 100 to call senators and in four months the president of the senate issued an internal resolution to allow for the publicity. In the lower house we litigated and the issue went up to the Supreme Court. We have litigated against Congress four other times on access to public documents and won them all.

What’s the best place to go to find out more about your work and other transparency initiatives in Argentina?

The best place is our website www.directoriolegislativo.org. We also coordinate the Latin American Network for legislative transparency www.transparencialegislativa.org. And there are other organizations in Argentina that work on transparency and have a lot of work done: Asociación por los Derechos Civiles www.adc.org.ar Poder Ciudadano www.poderciudadano.org Cippec www.cippec.org 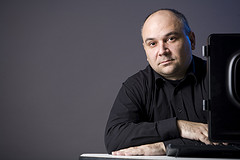 Marko Rakar is one of Croatia’s leading political bloggers and transparency activists. He was recently in the news for publishing a massive, easily searchable database of all public procurement data for government spending in Croatia dating back to July 1, 2009. His NGO, vjetrenjaca.org (Windmill), has been dubbed the Croation “wikileaks”. He has a history of exposing fraud and abuse in the Croatian political system. In 2009 he published a searchable database of Croatian voters, shining a light on the fact that there are more registered voters than citizens in the country. He was kind enough to answer a couple of questions about his work.

What’s your relationship been like with the Croatian government?

We had a change of government in late december last year and while previous one was actively harrasing me (including arresting at one point) this one actually asked for a number of inputs from me on different subjects; in the last few months I have been hired on some government data projects, I was also choosen to be one of the participants in Openg Government Partnership steering committe (for croatian “chapter” of OGP). It is far early to tell how will this develop or if we will have some results to show, but with new government it is a completely different (and so far positive) story.

What work of yours do you think has had the most impact?

as for the impact; we have done a number of different projects, some of those were clearly with educational value (for example visualisation of croatian state budget, or “state budget calculator” which allowed anyone to create their own version of state budget) and they were all very successfull and seen and used by hundreds of thousands of people (in a country of 4.5 mil people), we have done some actions which might be characterized as investigative journalism although they are also based on collecting and processing data – few weeks back we have published (so far secret) intinerary of governments plane which we reconstructed from (foreign) public sources. But the largest impact was voters list project simply because it affects everyone in the country and now everyone knows how the elections are manipulated and it is only a question of how to resolve this issue (which is not so simple). Our latest project with procurement was top story of the week in Croatia and we got unbeliveable press time for it, but it is too early to tell what will the true effect be in the future, but we know for a fact that journalists AND public prosecutors office use it on a daily basis.

Join us at TransparencyCamp April 28th and 29th just outside of Washington, DC to meet Maria, Marko and other folks — inside and out of government — who are working to making our government more open, accountable, and transparent. Register today at http://transparencycamp.org — and hurry! Space is limited.