This post was prepared in collaboration with Alexander Furnas and Alex Engler.

With just over a month until Election Day, most forecasts have Democrats in a strong position to hold their majority in the Senate and have strengthened their position in the last few weeks, moving ahead in close seat polling.

But when it comes to the money, the Senate remains very competitive. In this analysis, we look at the money in 19 close races that the Cook Political Report has deemed “Toss-up”, “Lean”, or “Likely” races within the last month. (We’ve excluded the three-way race in Maine for analytical purposes.)

See also: Our analysis of fundraising in competitive House races.

The quick summary is that, by our count, the Democrats have the lead in 11 of the 19 races. If money is determinative, this is not a great position for Democrats, since of the 19 seats we analyze, 15 are seats currently held by Democrats.

This analysis is part one in our ongoing attempt to measure what impact all this money is having (if any). Over the next several weeks, we’re going to be looking closely at the money these 19 races.

While political science literature is inconclusive on how much campaign money can affect election outcomes, few would argue that it is entirely irrelevant. In otherwise close elections, it can make a difference. Moreover, the possibility for large sums of outside money may change the dynamics of this election.

In this analysis we combine two measures of money into one amount that we use as the “total”: the itemized contribution data reported to the FEC through the end of the second quarter and independent expenditure data reported to the FEC through September 26. (Independent expenditures (IEs) are spending on political communications made completely independent of a candidate (no coordination) and can expressly advocate for a candidate. This cycle, the bulk of reported IEs have come so far from super PACs).

Obviously, this “total” is incomplete, especially with the potential for large amounts of dark money that we simply cannot track and under-$200 donations that are not itemized. We are also still waiting on third quarter reports. And of course, the outside money totals are very fluid, and constantly changing. (This Sunlight analysis of spending in Ohio highlights just some of the difficulties of pinpointing the moving target of campaign money.)

The current state of play

Let’s start with the big picture in Figure 1, which looks at the distribution of Democratic money edge by Cook Report rating (Cook rates all races on the likelihood of which party will win). Figure 1 shows that there are several seats where Democrats have big money advantages, including three toss-up seats: Connecticut, Montana, and Wisconsin. However, the Republican candidate in Connecticut, Linda McMahon, is largely self-financed, which likely negates the Connecticut advantages

By our measure, Democrats currently are behind on the money chase in eight states: Ohio, New Mexico, Massachusetts, Virginia, Hawaii, Indiana, North Dakota, and Arizona. 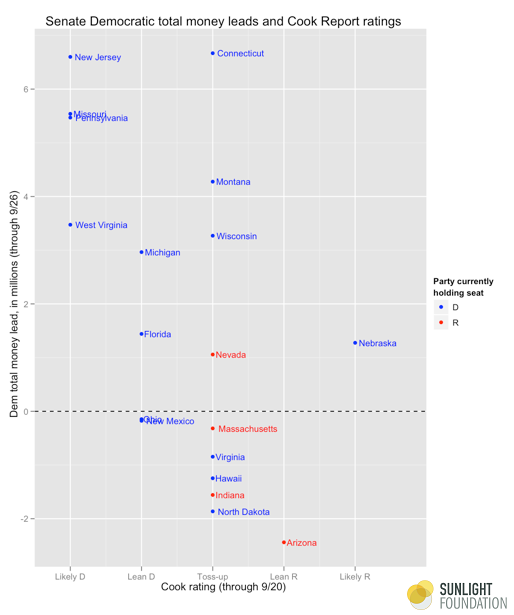 We can also see (Figure 2) that Democrats are ahead in all four races cast as Likely Democratic. The four Lean Democratic races are split two and two on funding edge.  And in the nine toss-up races, Republicans have more money in five, Democrats in four. 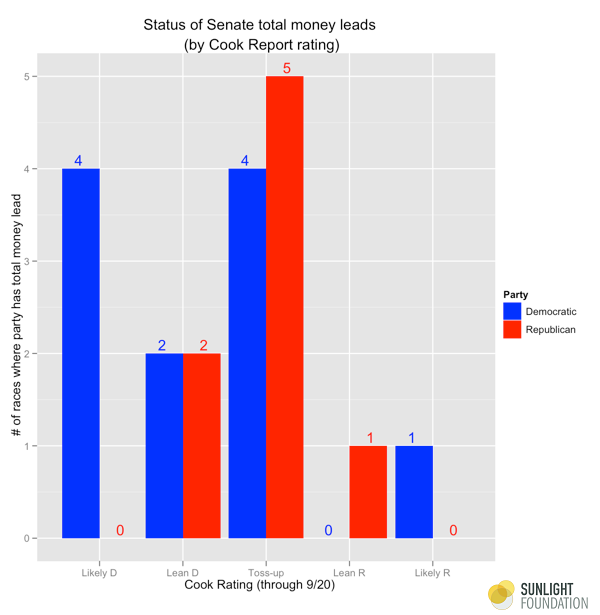 Overall, we can see that Democrats have the money advantage in these 19 Senate races – $144.3 million to $110.9 million (Figure 3), though their advantage is much stronger in the itemized hard money contributions ($102.9 million to $70.7 million) than in the outside independent expenditures ($41.5 million to $40.2 million). It is important, of course, to recognize that this does not include the so-called “dark money” that is not reported to the FEC, and appears to be favoring Republicans. 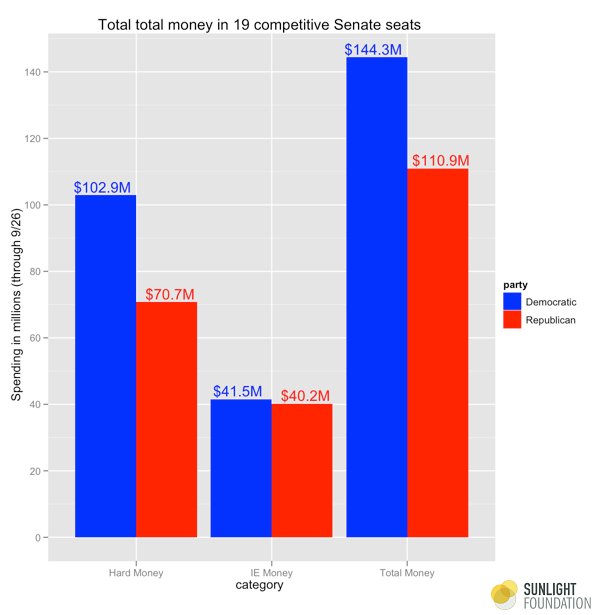 Turning to independent expenditures, Democrats currently have more than a  $1 million advantage in outside money in Missouri, Montana, Wisconsin, and Connecticut (Figure 4). Republicans have the biggest advantages in Indiana and Virginia (around $2 million in both), and significantly Florida (almost $5 million) 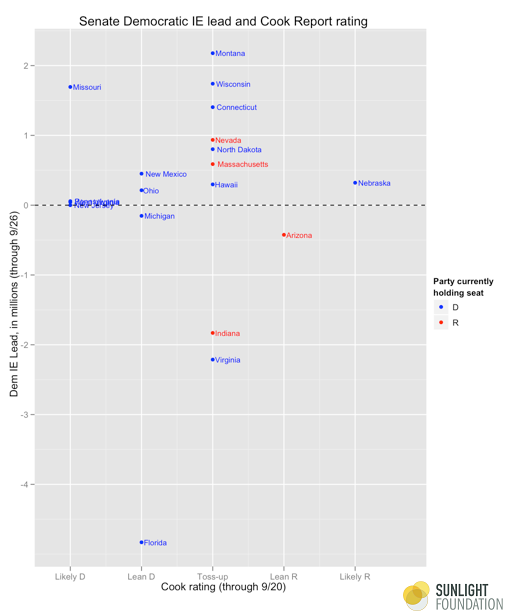 Overall, Democrats have the independent advantage in 14 of 18 races where there have been reported independent expenditures, including seven of the nine seats listed as toss-ups. (Figure 5) 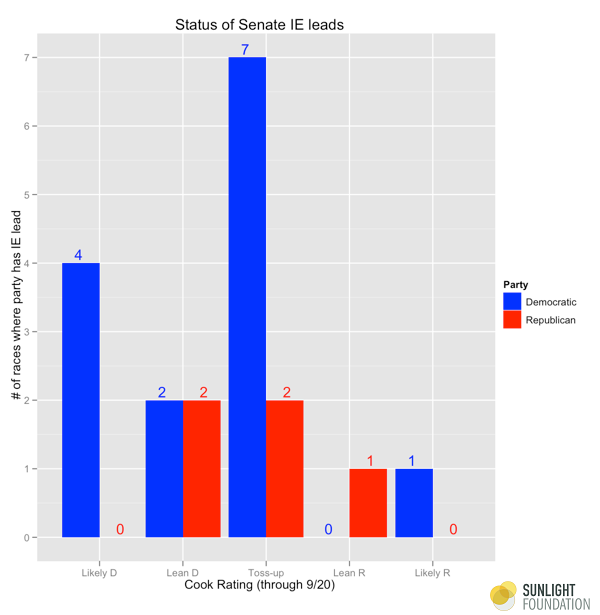 There does not appear to be much of a correlation between the itemized money advantages and the independent expenditure advantages (Figure 6). Perhaps the most significant race of note here is Florida, where the Democratic incumbent (Bill Nelson) has outraised his the Republican challenger (Connie Mack) by more than $6 million. Mack seems to be making up part of the shortfall with nearly a $5 million advantage in independent expenditures. 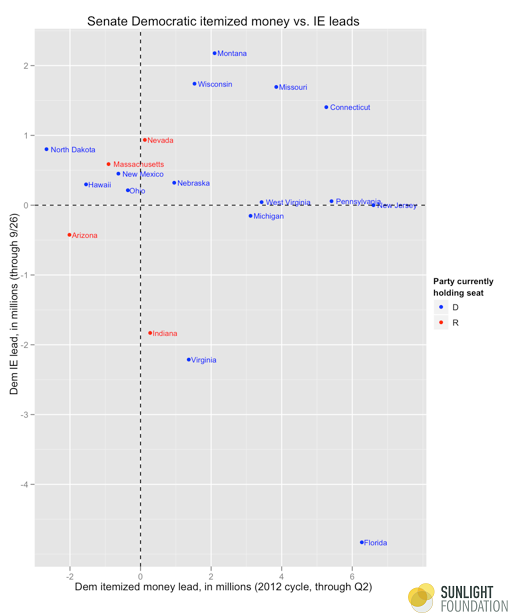 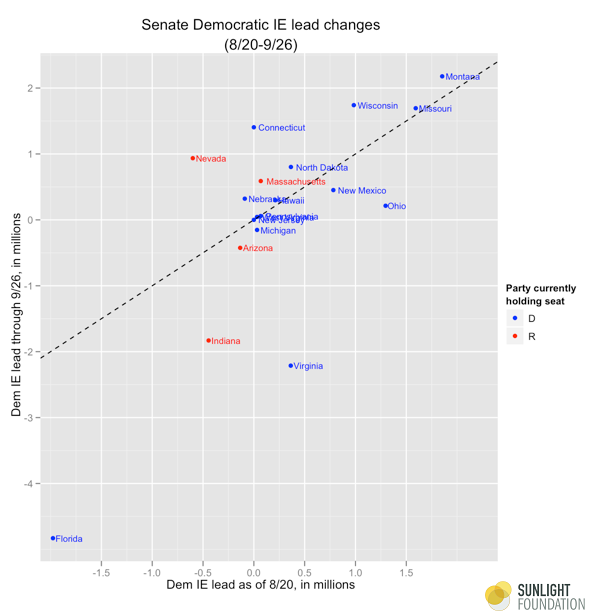 Finally, Figure 8 looks at whether there is any relationship between seats changing their Cook rating and their change in IE differential over the last five weeks. The three seats that have become more Democratic by Cook’s rankings (Arizona, New Mexico, and Indiana) are all seats in which Republicans have pulled ahead in IE expenditures, as if to try to pull those seats back. And Connecticut, which has become a toss-up after being likely Democrat, is a seat where more IE money has gone to help the Democrat. Right now, this figure is not as informative as it could be, but if more seats change status, it may become more informative. 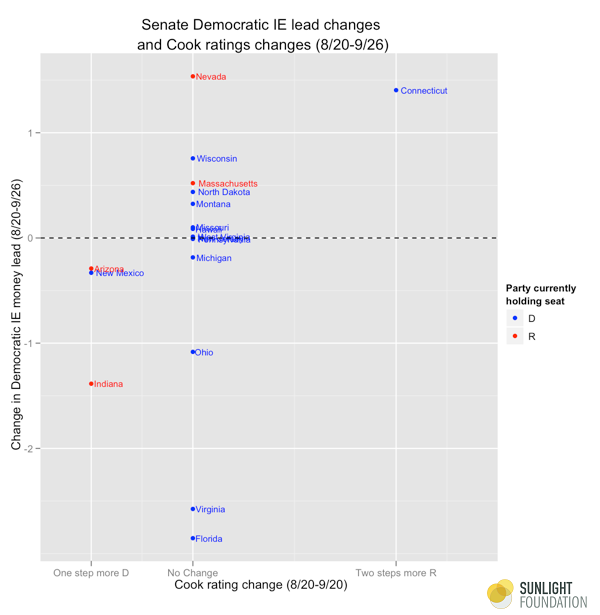 In conclusion, these charts offer a series of admittedly incomplete snapshots of a process that is in rapid motion. We will continue to update as more data become available, and continue to investigate the extent to which changes in money are correlated with changes in race status and ultimately victory.

At the very least, these charts give some insight into the state of play in the Senate, and provide a baseline for the many changes to come in the next month or so. Right now the money chase in the Senate is very close. If money is determinative in any way, the two parties are very competitive in the battle for the Senate.