As we started thinking about how to approach cities across the US, we had to think about where to focus our effort and attention. Should we focus on a few key, well-known cities who set the strongest examples of developing transparency and open data reforms? Should we narrow down the list to only the biggest, say, 10 cities, or break them into categories by size?

In confronting these questions, we found important lessons about the population sizes of American cities that we’ll use to shape our overall approach to our municipal work. It turns out that most U.S. cities are far smaller than you might think. More than 80 percent of U.S. cities have fewer than 10,000 people. The scope and kinds of data housed in these cities might be vastly different from the data in a metropolis like Los Angeles, with its more than 3 million people in the city limits alone.

We also broke down the data to look at the distribution of cities with fewer than 500 people. 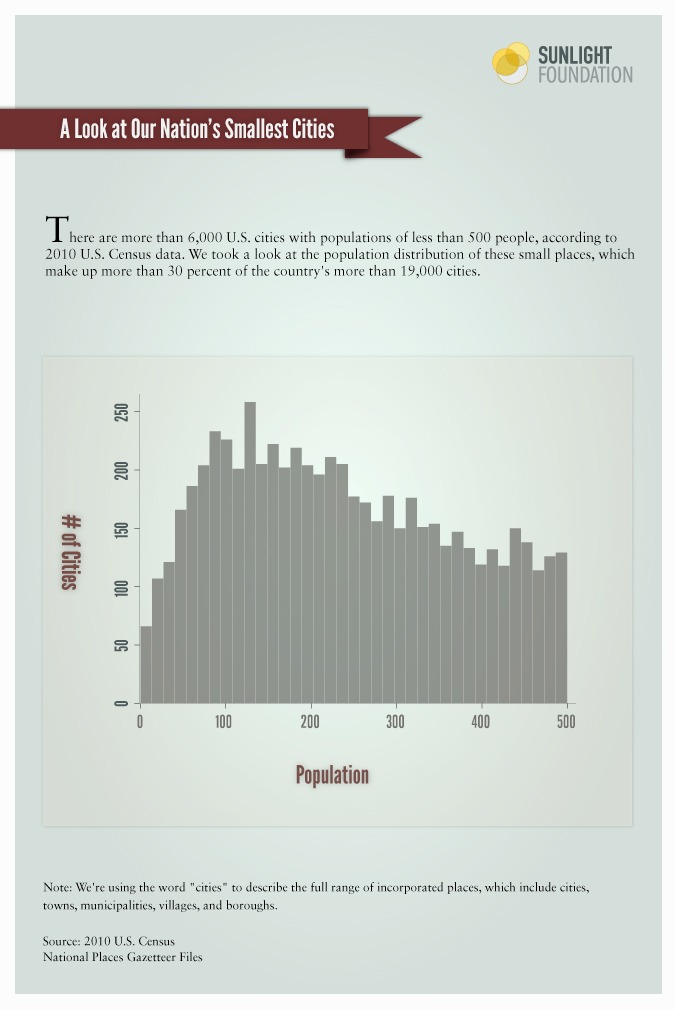 The country’s 25 most populous cities are home to about 10% of the U.S. population. Perhaps more surprisingly, another 10% of the population lives in cities with populations under 10,000. So what does that mean? That small cities — and towns — are important, and that the transparency and accountability policies of small cities matter enormously.

Small and medium-size cities make up a large portion of the municipal governments in the United States. (Again, 80% of U.S. cities have populations of fewer than 10,000 people.) The fact that there are so many small and medium sized cities suggests something about our country’s growth and development. Just as cities have been drivers of cultural and industrial development, they are also a window into the country’s diversity and history. Engaging with the richness of these small and medium-sized places means engaging with the richness and complexity of our whole country. It gives us greater perspective on the cross-section of people and governments entangled in the questions of local accountability that we’re trying to answer and is a good reminder of why we have taken on this work in the first place.

We used 2010 US Census data to explore the wide range of populations among incorporated places. We use “cities” here in a colloquial sense, referring to the range of “incorporated places” tracked by the Census, which includes everything from cities and towns to villages and boroughs. The data for the pie chart is from the 2010 US Census Incorporated Places by Population Size file. Data for the histograms is from the National Places Gazetteer Files.